Marking an important milestone in the country's defence history, the first ever UN contingent of Sri Lankan troops of all three Armed Forces took their leave of the beloved ones, Senior Officers and their workmates on Friday (30) evening after a brief send-off ceremony at Colombo Bandaranaike International Airport (BIA).

Smiling members of the Sri Lanka Army (102), Navy (50) and Air Force (48) of the third UN contingent bound for Haiti to supplement the already serving Sinha Regiment soldiers of the Army, boarded the specially chartered UN flight as bagpipers played rhythms of symbolic music, meant for such military occasions amidst greetings. This was the first contingent of Sri Lankan tri-services to serve a UN assignment overseas.

A large gathering of Senior Officers of the Armed Forces, next of kin of those troops and well-wishers filled one side of the departure terminal as hundreds of national and UN flag carrying troops and their family members lined up greeting one another before the Commander of the UN contingent led his troops to the aircraft.

On completion of routine formalities at the airport, UN bound troops met their spouses, children, relatives, friends and well-wishers, who had arrived there to say goodbye to them. Tears rolled down as many began to hug and embrace their beloved ones on the eve of their departure to Haiti and it was a moving scene combined with a sense of both departure and loss of close touch at least for a brief period. 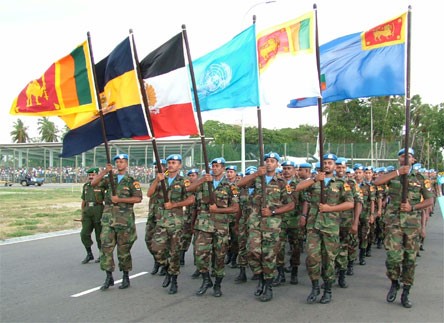 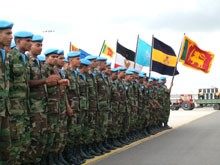 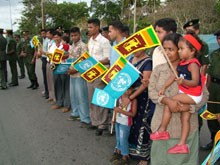 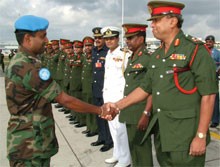