The Sri Lanka Army, much admired by the common folks as Guardians of the Nation made history this morning (8th September 2004) when its UN bound peace-keeping troops formally bade au revoir at a colourful military ceremony held at Panagoda Army Cantonment graced by the Commander of the Army, Lieutenant General S. H. S Kottegoda and a host of other Senior Officers of the Army.

Subsequent to a request made by the UN Department of Peace Keeping Operations (UNDPKO), the Sri Lanka Army for the first time in its 54 year old history, provides a contingent of troops to be deployed in the west of Port Au Prince in Haiti to assist its transitional government in its efforts to restore civil administration. Though several Army Officers on earlier occasions served as UN observers in many an assignment, this is the first time a batch of this magnitude is sent overseas as UN peace-keeping corps from Sri Lanka.

Today\'s ceremony included the Guard Turn Out plus ceremonial parade dressed in combat accorded by departing troops to the Colonel of the Regiment, Sri Lanka Light Infantry, Major General N. Mallawaarachchi. To memorize this great phenomenon, all troops sat for a group photo with the Commander of the Army, Lt. Gen S. H. S Kottegoda before he addressed the UN troops bound for Haiti. The UN initiative to this effect was taken by the former Chief of Defence Staff and Commander of the Army, General L. P Balagalle after many rounds of discussions he has had with Hon. Minister of Foreign Affairs Mr Lakshman Kadiragamar and his officials in the Ministry.

In his address to the troops, the Commander highlighted the procedures adopted to select the SLLI troops for this challenging task and the importance of today\'s event as a whole to the Army and the country in general. He also did not fail to remember his predecessor, General L. P Balagalle former Chief of Defence Staff and Commander of the Army, General L. P Balagalle with gratitude who tirelessly worked towards achieving this goal with the help of Major General P. S. B Kulatunga, former Director General General Staff, all Principal Staff Officers, Directors and Staff Officers of the Army Headquarters. \"Let me appeal to all of you to do your piece of work to the satisfaction of everybody in Haiti and bring credit to both this country and the Army alike. It is also important to remember that your salary paid by the UN, due to logistic reasons at UN level could get late at the outset but it would be definitely paid belatedly.\" Alerting the troops for imminent health hazards in Haiti, the Commander wished good luck with their deployment and stay in Haiti.

The luncheon with All Ranks culminated the day's proceedings immediately after the Commander's visit to the location where Haiti-bound all equipment were on display. Dispatch of Sri Lankan troops for UNDPKO brings many benefits home by way of recognition of the Sri Lankan troops, boost of the morale of troops and not least, the much-needed foreign exchange. Simultaneously, Sri Lankan troops thus deployed abroad will be exposed en masse to new military doctrine/conceptual and mechanics of conducting peace-keeping operations.

Preliminary training for those departing troops were conducted at the newly-established UN sponsored Institute of Peace Support Operation Training in Sri Lanka (IPSOTSL) at Kukuleganga under the auspices of a panel of UN experts and instructors.

Following the approval given by Her Excellency, the President Chandrika Bandaranaike Kumaratunga, in her capacity as the Commander in Chief of Armed Forces, the Sri Lankan troops with their equipment are to be deployed in Peace Keeping operations along with the troops from Brazil,Chile, Argentina, Nepal, Paraguay, Peru and Philippines. 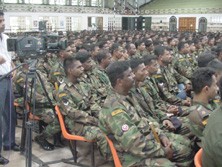 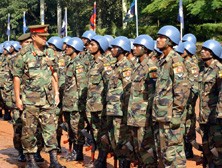 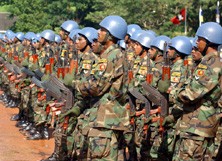 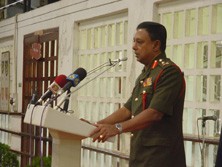 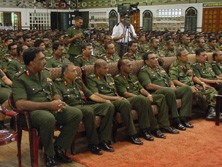 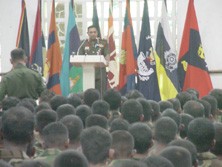 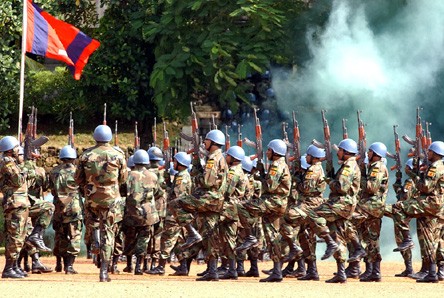