A group of twenty-one delegates, most of who are course participants at the National Defence College (NDC) of India on an invitation extended to them by the Sri Lanka Army, are now in Sri Lanka as part of their field study tour in the course.

The delegation led by Shri Alok Jain of the Indian Administrative Service and Rear Admiral D.K. Dewani of the Indian Navy comprised Army, Navy Police and Air Force officers from India, Nepal, Singapore, Maldives, Nigeria and Malaysia who are currently studying at the College.

The delegation of the National Defence College of India during their six-day long stay in Sri Lanka met the Indian High Commissioner in Sri Lanka, Deputy Minister of Defence, Secretary of Defence, Chief of Defence Staff, Commander of the Army, Commander of Security Force Headquarters, Wanni and visit Wanni, Omanthai Entry / Exit point, Anuradhapura and Kandy.

After their return from visits to Anuradhapura, Vavuniya and Omanthai as the first leg of the programme, the delegation called on the Hon Deputy Minister of Defence Ratnasiri Wickramanayake and the Secretary of Defence at their office in Colombo..

The Minster fielded a series of questions, posed by the delegates on the current situation in Sri Lanka and particularly on the peace process. He reiterated the Government's commitment for a peaceful settlement and welcomed their views. â€œPeople do not want another war and it is the duty of all concerned to compel the LTTE to come to the negotiating table to arrive at an amicable solutionâ€ he said.

The Minister added that politicians of the North and East are being dictated to by the LTTE and they cannot act with their own free will. All must force the LTTE to come into the democratic stream. If there is free and fair elections in the North and East, the Tamils for sure will defeat the terrorist forces, added the Minister.

Defence Secretary Major General Asoka Jayawardene was also associated with the meeting along with Chief of Defence Staff and three service chiefs.

Army Commander, who hosted the visiting delegates to dinner earlier during their first day of the visit to Sri Lanka, hailed India's continuing support being given to the Army and Defence Forces in Sri Lanka by way of Defence study courses, training, etc. Mementos to signify their stay in Sri Lanka were also exchanged. 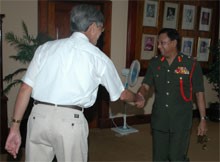 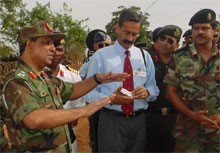