Sri Lanka Army Welfare Association was formed on 23rd May 1989 by Army Routine Order 33/89 with the aim of providing welfare facilities to serving Officers / ORs and for their families in order to uplift their living standards. With the expansion of the Army, Sri Lanka Army Welfare Association was renamed as Directorate of Welfare on 30 April 1994 by Army Routine Order 18/94.

To ensure a smooth, continuous and regular functioning of the current welfare projects and to launch more innovative welfare projects for the benefit of all ranks, serving in the Sri Lanka Army.

ROLE AND TASK - SECTIONS UNDER DTE OF WELFARE

Loans are given to serving members of Sri Lanka Army under 5% reducing balance repayment system.

b. The Required Qualifications & Documents

e. All loan applications must be forwarded only through the Regimental Centres according to the monthly loan limits allocated to the respective RHQs.

a. Lands which are acquiring from government agencies, purchase from outside and donations from well wishers will distribute among the members of the Army with the instruction of AG and Comd of the Army.

b. Issue recm letters to MOD with the intension of obtaining a suitable land which are earmarked by the Divisional Secretaries and when calling nominations.

c. Fwd recm letters to MOD in order to obtain permits Under concessionary basis for the members of the Army who are living in Government lands without proper authority.

a. Issue of clearance to Retired/KIA/AWOL and discharged persons of the Army.

b. Monthly repayment installment will be collected through the Dte of P &R after facilitating of loans and other welfare schemes.

c. Certify the clearance for all applications prior to obtaining welfare facilities.

d. Monitoring and computerization of deduction received by the Dte of P&R.

b. The Membership fee is Rs.50.00 and it will deduct from the January salary on annual basis.

c. Death Donation is paid directly to NOK by the respective Regiments and later it will reimburse by Directorate of Welfare.

b. When a Offr/OR is summoned to Civil Courts in relation of his/her duty, they can request financial assistance from this fund as Legal Expenditures up to Rs.500,000.00

c. Membership fee & dividends are paid to the members on their retirement /medical board out or discharged from the Army.

a. As per the ARO 2/2014 dated 05 June 2014 & ARO 6/2016 dated 02 May 2016, admission of children of the Sri Lanka Army personnel to grade one of Government Schools and Defence Services College – Colombo / Kurunegala in liaison with of MOD and Ministry of Education.

b. An applicant must select 6 x Schools within the province (National / Provincial) as per his / her priority.

a. Army Welfare Shops are located at Panagoda, Boossa, Ampara, Pallekalle, Minneriya, Diyatalawa and Anuradhapura under the Dte of Welfare.

b. Availibility of rooms & rates

a. In order to provide financial assistance to the serving/retired members and their families of the army by reimbursing the expenditure incurred by them for the medical treatments received at government/private hospitals for any ailment and pay compensation for permanent disability of members, death of members, spouse and children. 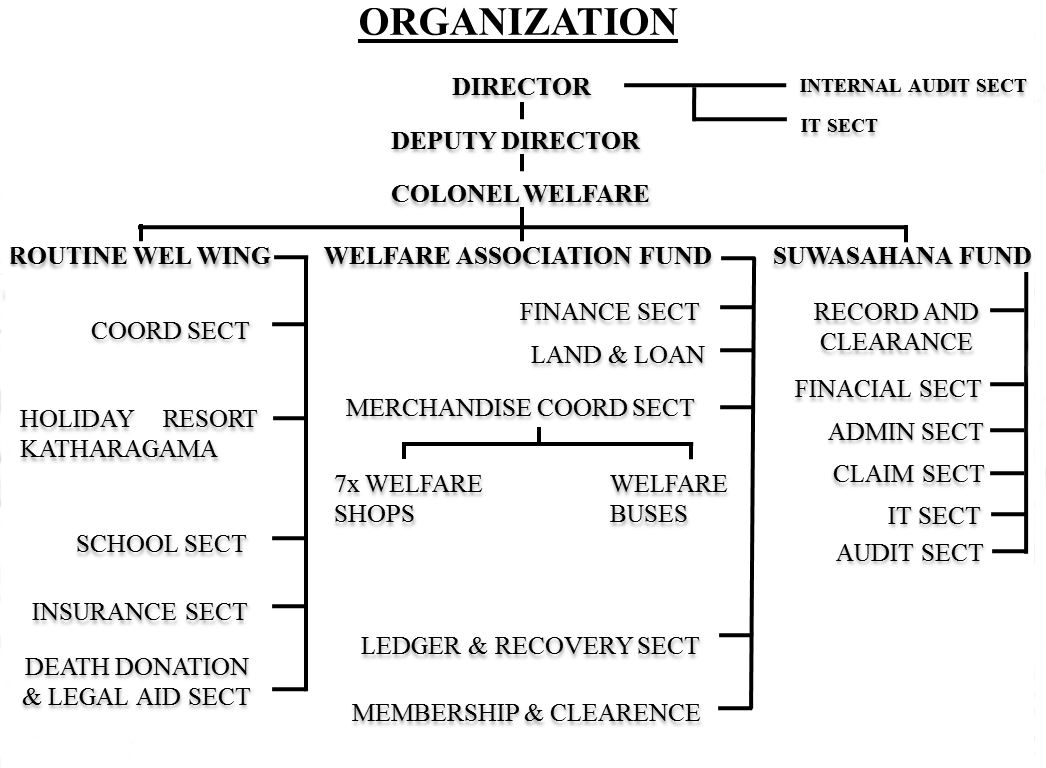