Colonel Pasichnyk and Lt. Gen. Balagalle exchanged matters of mutual interest and global concern during this brief meet at Army Commander's office. To mark the occasion, Lt. Gen Balagalle presented the visiting delegate with a plaque.

He was then placed Officer in charge of a Combat-training section of an infantry division in the Ukranian Army during which period he was promoted to the rank of Lt. Colonel. He pursued a correspondence study course subsequently at the Kyiv Military Academy between 1994-1996. During 1996-2000 he was made the Deputy Chief of a section of Combat-Training Department of the Landing Force. In the year 2000 he was appointed as Chief of Section, Main Personnel Policy Directorate, Ministry of Defence in Ukraine.

Since August 2002, Colonel Pasichnyk has been working as Defence Attache to the embassy of Ukraine in the republic of India accrediting concurrently to Sri Lanka. 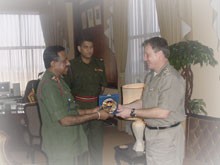 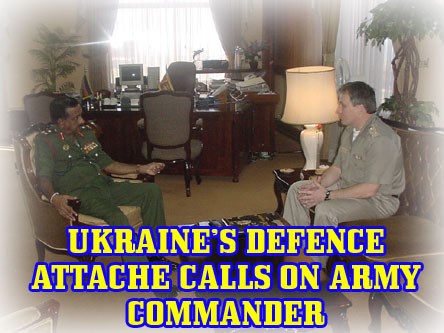