The ‘Virusara’ Privilege Card that provides multifaceted service benefits to families of fallen War Heroes and disable War Heroes was launched Monday (25) afternoon during a colourful ceremony, headed by President Maithripala Sirisena as the Chief Guest at Temple Trees.

Monday’s (25) ceremony got underway with the arrival of President Maithripala Sirisena who was warmly received by Mrs Anoma Fonseka, Chairperson, RSA and a representative group of disable War Heroes and scholarship beneficiaries from Jaffna, Ampara, Batticaloa, Vavuniya, Badulla and Polonnaruwa.

Mrs Anoma Fonseka, Chairperson RSA afterwards delivered the formal welcome address and extended warm greetings to all those attendees and briefed the gathering tracing how the project began to take shape.

Mr Ruwan Wijewardene, State Minister of Defence in his brief address to the gathering explained the benefits that could be made available to the War Heroes under the ‘Virusara’ project, harnessing the support of state and private sector entrepreneurs and services in the future.

He also traced the birth of the ‘Virusara’ Privilege Card, coined under the theme, ‘Sudu Pareviyanta Ida Demu’ (Let us facilitate white pigeons) and explained how it would be implemented on staggered basis covering all War Heroes as a welfare measure extended to servicemen, Policemen and Civil Security Department personnel.

At the next moment, the new official website, virusara.gov.lk of the RSA was launched by the President Maithripala Sirisena, flanked by the Ministers, State Secretaries, Army, Navy and Air Force Commanders. The website provides all data and information regarding benefits of the ‘Virusara’ Privilege Card and educates all potential applicants who are entitled to receive this card and other supportive information.

The thematic song, sung by Kasun Kalhara was staged alive next, coupled with visuals, adding colour to the occasion while the event was readying to give away scholarships to 100 war-affected children. Mrs Fonseka accompanied the President, Ministers and Secretaries to the main stage for award of those scholarships to a representative gathering of students in the North and East and War Hero families.

Simultaneously, the new ‘Virusara’ Privilege Card was symbolically presented by the President and other guests to 50 family members and disable War Heroes of the Army (24), Navy (8), Air Force (6), Police (4) and Civil Security Department (4) as the ceremony was reaching its climax.

President Maithripala Sirisena, making a convincing speech to the occasion asserted that his prime objective as the country’s first civil servant was to protect the country as well as the good reputation of her armed forces. He also emphasized that Sri Lanka cannot stand alone and be away from fast changing technological innovation and advancement in the world. (See the full text of his speech under Highlights)

Several cultural and dancing events staged by the cultural troupes of the Sri Lanka Army, Navy, Air Force and the Civil Security Department entertained the attendees. 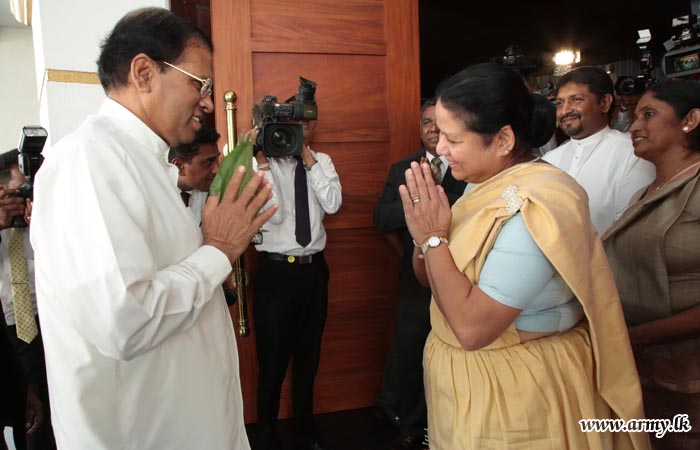 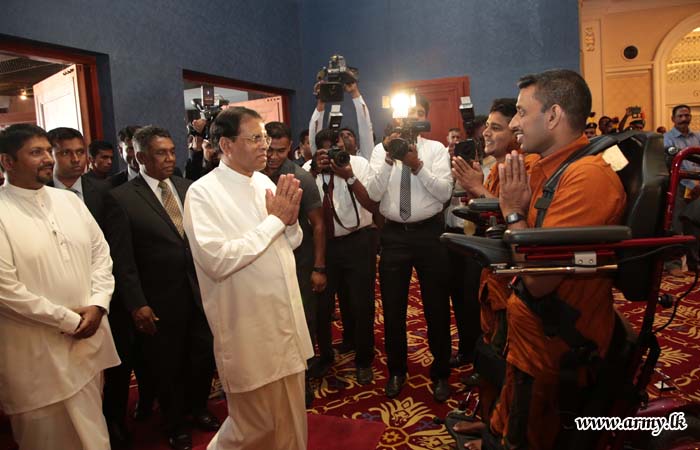 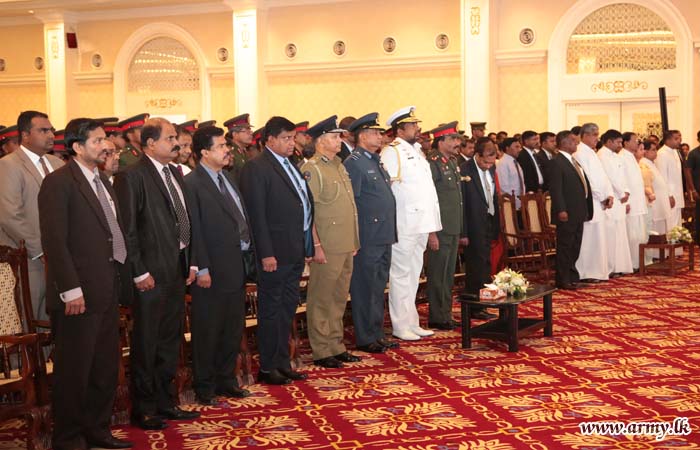 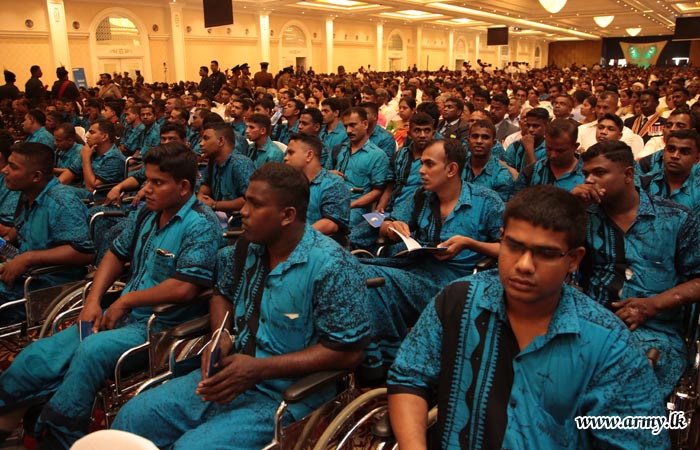 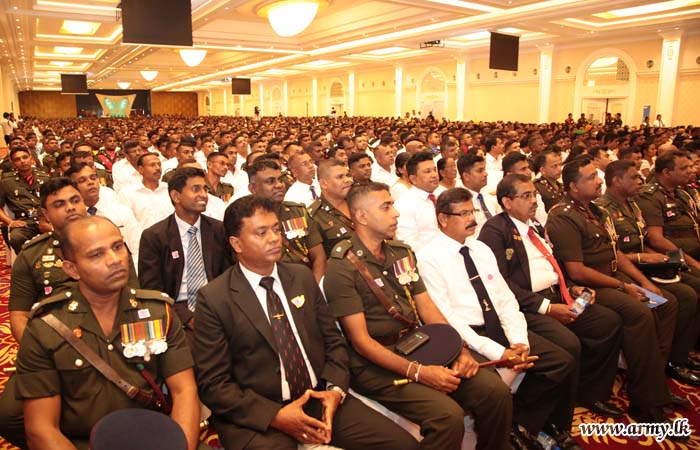 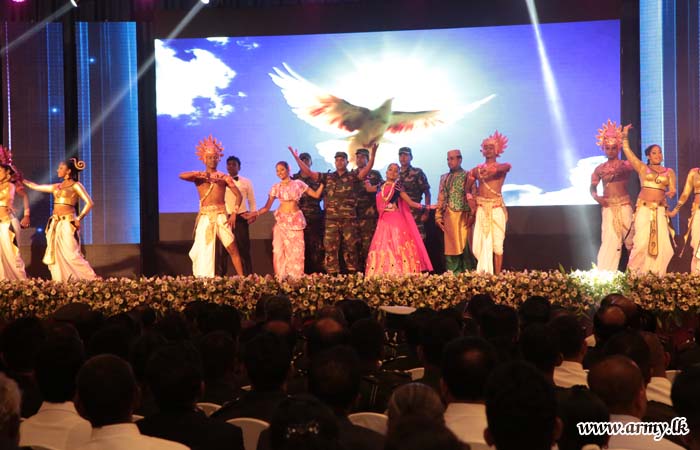 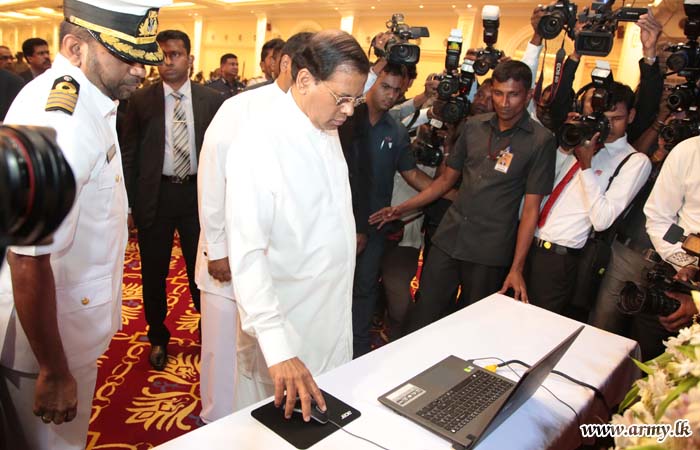 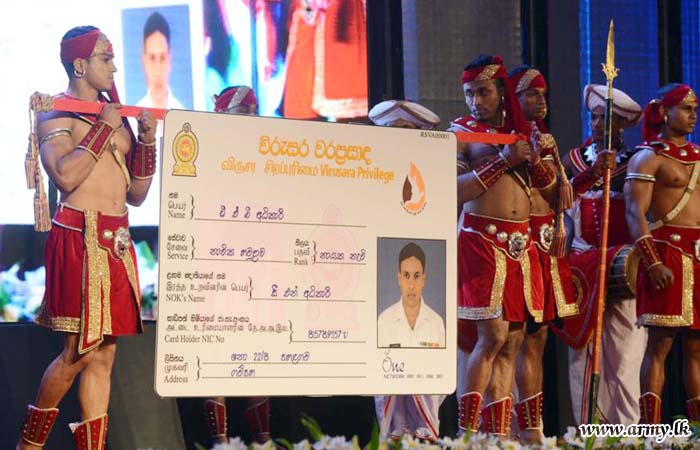 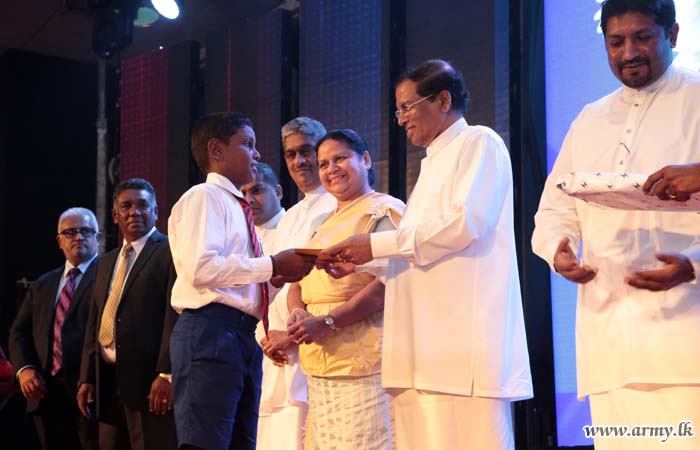 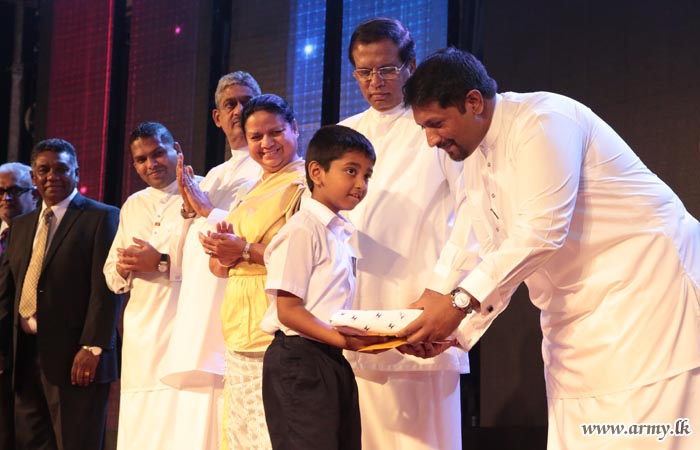 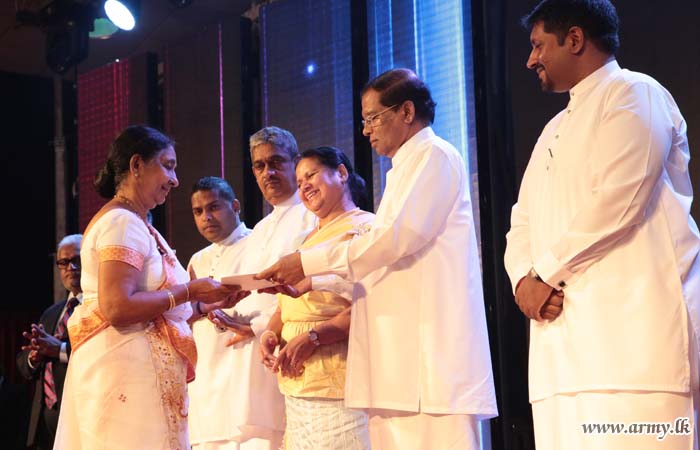 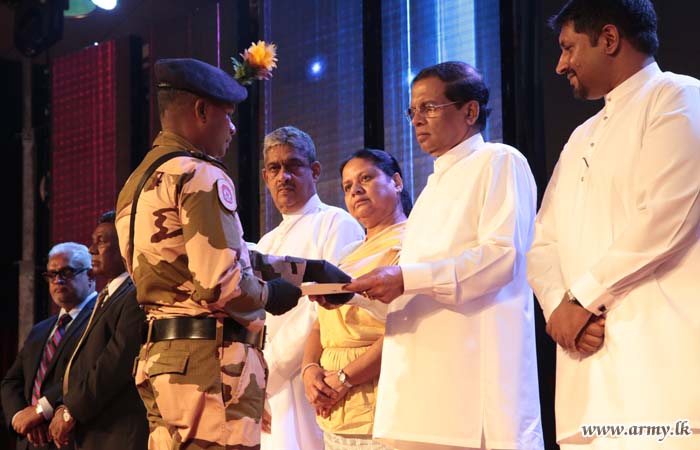 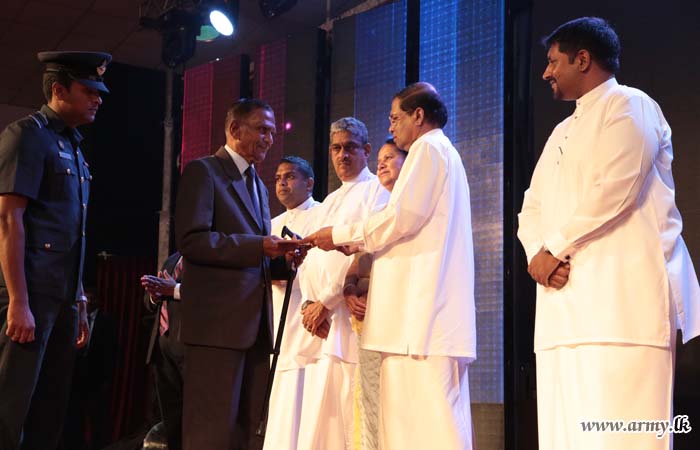 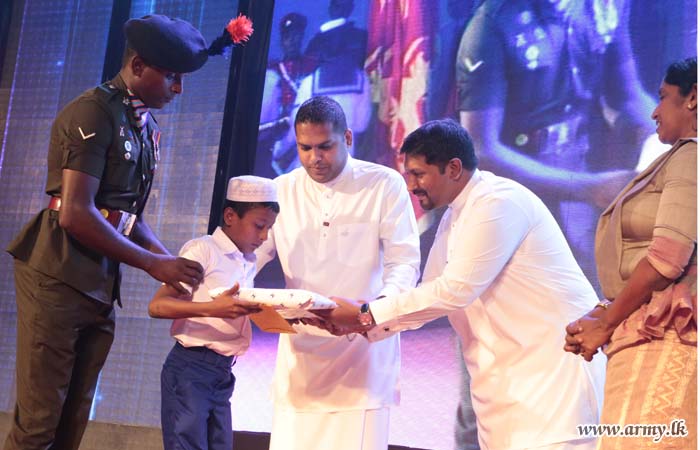 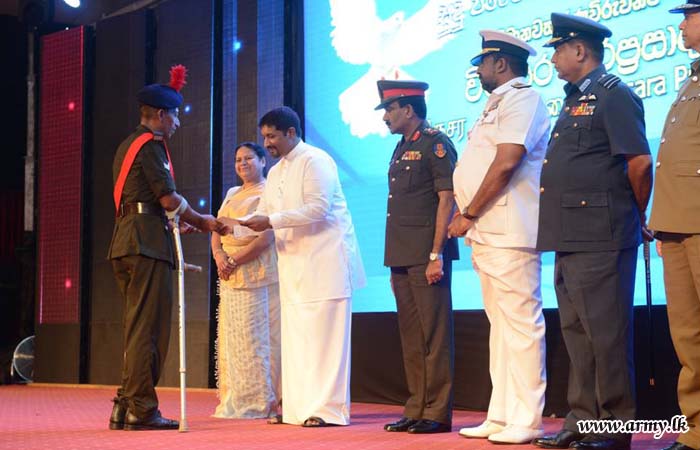 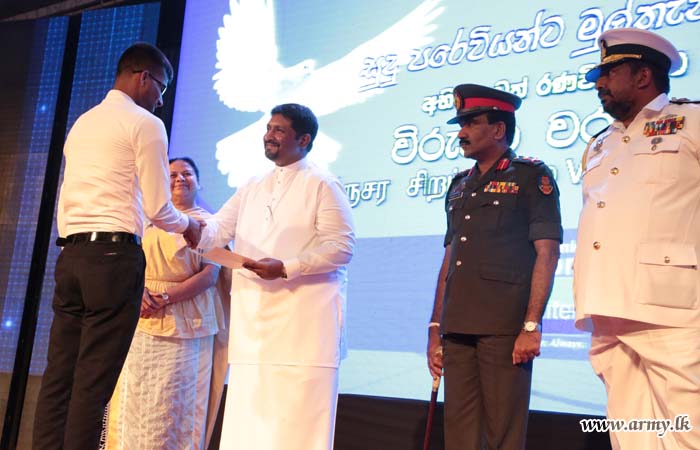 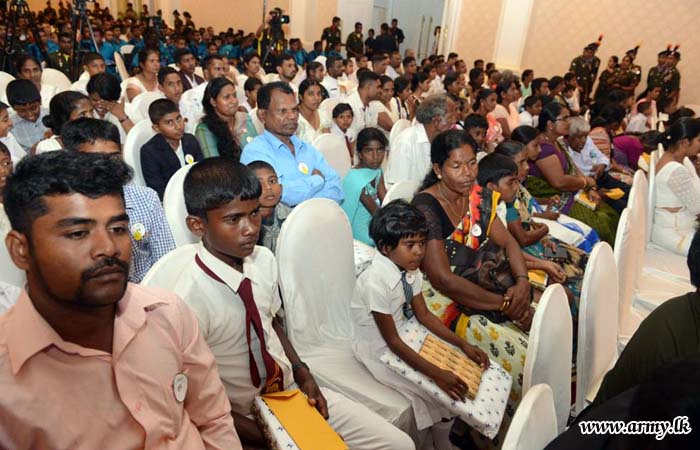