'Village of Reconciliation' in Kokeliya Vested in Tri-services Personnel

‘Sanhindiyawe Sathvirugama’ (Sathvirugama village of Reconciliation), the housing project with 51 new homes at Kokeliya, Vavuniya, built by the 56 Division troops of the Army of the Security Force Headquarters - Wanni (SFHQ-W) and 4 Corps of Engineer Services (4 CES) through funds of the ‘Api Wenuwen Api’ house construction project of the Ministry of Defence (MoD), was vested in serving Tamil woman soldiers and Army personnel married to Tamil ladies as a reconciliation project of the best exemplary nature on Sunday (3).

Each house erected in 40 perch land slots is worth about Rs 2 million in the ‘Sanhindiyawe Sathvirugama’, without any labour cost because of the involvement of the troops for construction.

Hon Ruwan Wijewardene, State Minister of Defence during the ceremony, replete with Sinhala Tamil New Year rites and rituals handed over the keys of those 51 new houses to Tamil woman soldiers, soldiers married to Tamil women and vice versa, a soldier with seven children, and next of kin of the rape victim, Vidhya who was murdered several months back in Jaffna.

The ceremony got underway after the Secretary Defence and other distinguished guests welcomed the Chief Guest and conducted him to symbolically give keys to the next of kin of brutally murdered school girl Vidhya as the first item on the agenda.

Soon after that, the name board in the ‘Sanhindiyawe Sathvirugama’ was unveiled followed by the ceremonial opening of the Children’s Park in the complex after a visit by the visitors to the site.

Subsequently, the State Minister symbolically handed over the keys to a Tamil woman soldier, married to a Sinhala soldier as the first inaugural event of the programme. A few other new houses were likewise warmed giving pride of place to Hindu and Buddhist religious rites and rituals around the same time.

A multi religious ceremony invoked blessings on the recipients and all residents in the complex. 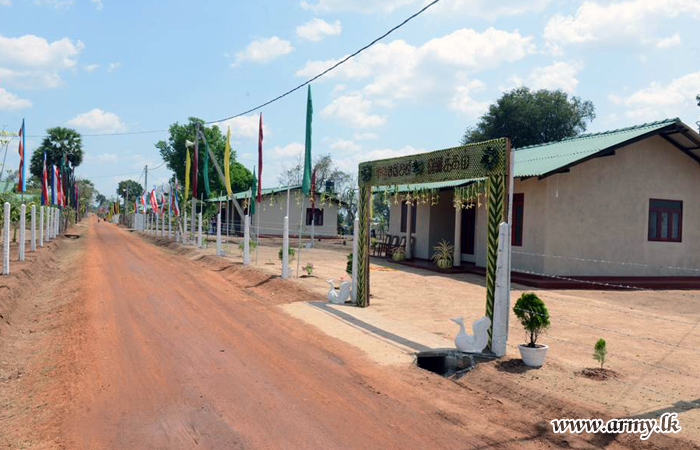 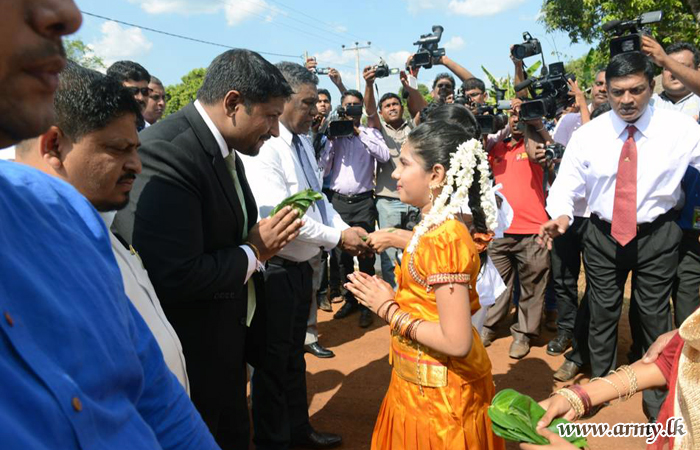 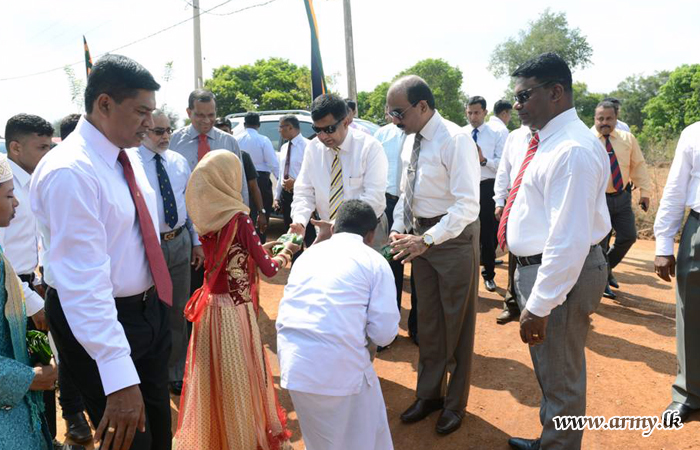 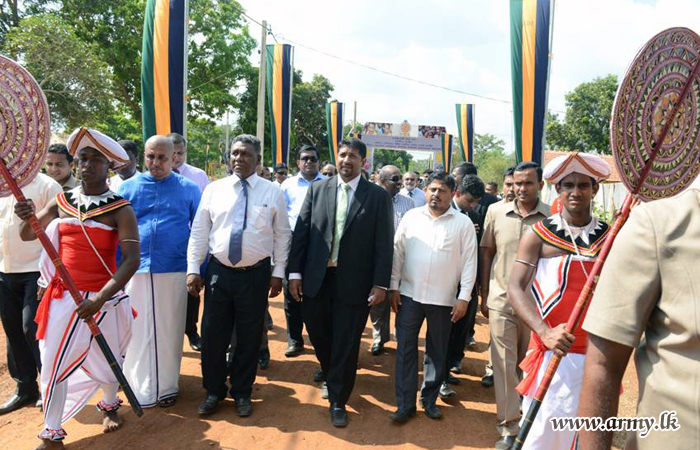 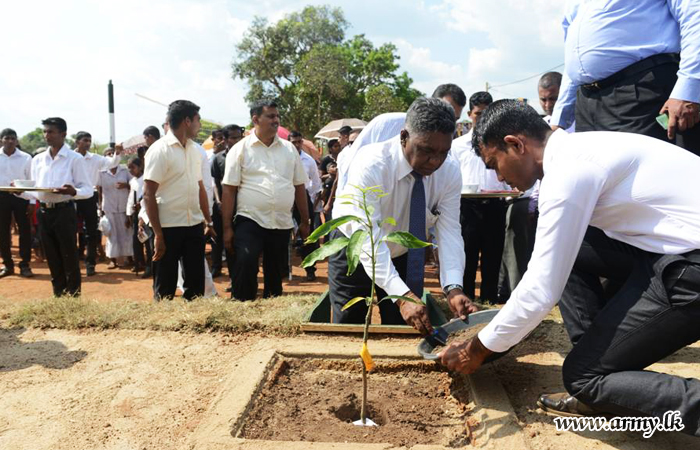 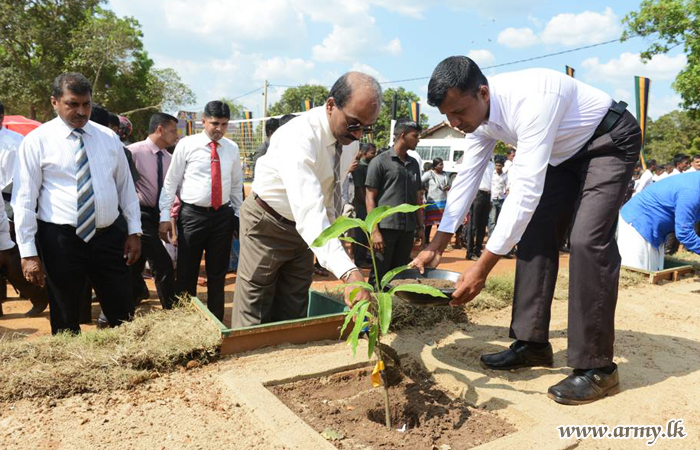 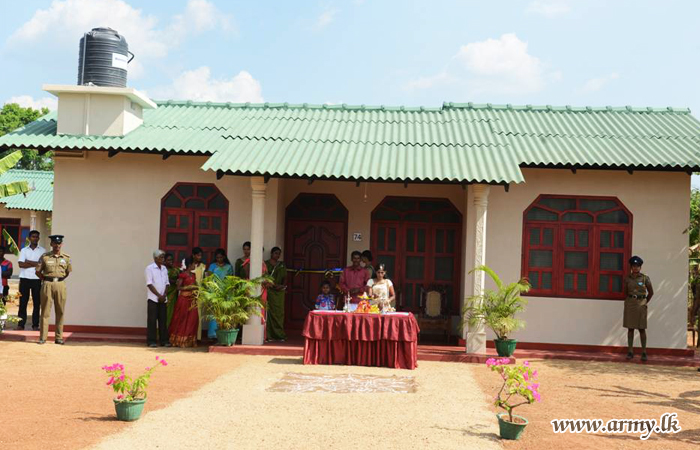 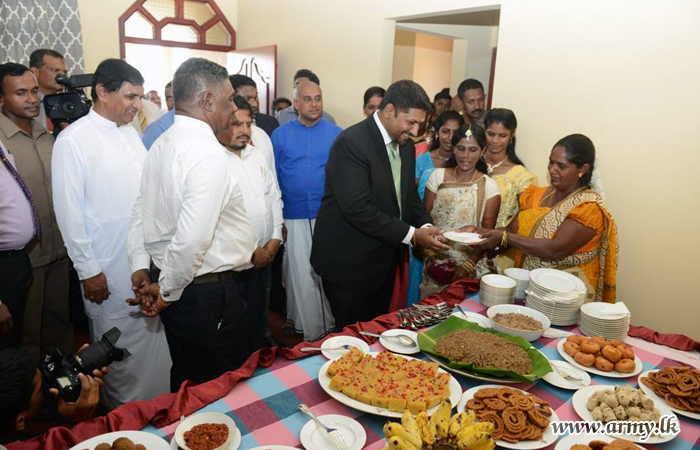