Major General Karl Eikenberry, Director for Strategic Planning and Policy, US Pacific Command along with three more senior US Army Officers was in Jaffna on Friday (22) during an official visit to Sri Lanka.

A Guard Turnout at Security Forces Headquarters, Jaffna greeted the arrival of Major General Eikenberry to the peninsula after he and his entourage was welcomed by Commander, Security Forces Headquarters, Jaffna Major General S. D Tennekoon on arrival at the Palaly airport. Major General S. D Tennekoon, afterwards gave a brief account of the history of Jaffna and its present security concerns during his meeting with visiting delegates at the office of the Jaffna Commander where tokens of mementoes were exchanged to signify the event.

The visiting US military chief in what was seen as another symbol of goodwill and memory, planted a mango sapling at the Headquarters premises before he toured Kankesanthurai harbour, Sand dunes at Manalkadu, Point Pedro areas and several other places of interest. Received by Brigadier V. R Silva, General Officer Commanding, 55 Division, on their arrival at Muhamalai Entry/Exit point, the visiting delegation inspected and observed the Forward Defence Line (FDL) and received an update on the current security situation in the area.

Major General Karl Eikenberry is the Director for Strategic Planning and Policy, United States Pacific Command at Camp H. M. Smith, Hawaii. Prior to his current assignment, he was the US Security Coordinator and Chief of the Office of Military Cooperation in Kabul, Afganistan.

His operational assignments cover service as Commander and Staff Officer with mechanized, light, airborne and ranger infantry units in the US, Korea and Europe, most recently as an Assistant Division Commander with the 25th Infantry Division (Light) at Schofield Barracks, Hawaii. 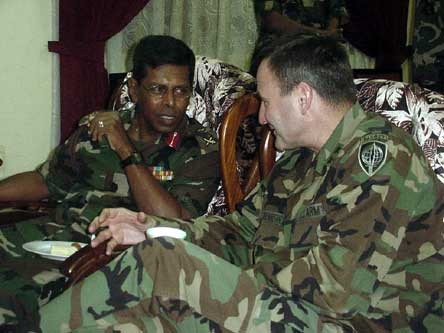