10 dead bodies of civilians and 3 severed body parts of victims were recovered this afternoon (18) from landslide-affected Siripura, Elangapitiya and Pallebage areas in Aranayaka by Army troops, engaged in search, rescue and relief operations, the latest reports confirmed.

Army Commandos were able to rescue 1156 stranded civilians in Aranayaka area and conducted 1041 displaced ones to temporary shelters, including temples and schools during Wednesday (18) forenoon while Commando troops were able to recover mutilated body parts of at least 3 civilians, believed to have been buried alive.

At the same time, Bell 212 helicopters of the Sri Lanka Air Force are conducting surveillance missions in flooded areas which are not accessible to the ground troops. In the same manner, Sri Lanka Navy having formed 72 emergency teams has deployed its troops covering mostly the coastal and hinterland areas that remain inundated.

Similarly, Sri Lanka Army troops across the island on the directions of the Commander of the Army, Lieutenant General Crishanthe De Silva, have been continuing their emergency rescue and relief operations in many parts of the island, including Colombo, Gampaha, Kalutara, Galle, Ratnapura, Kegalle, Kurunegala,

141 Brigade troops serving under the 14 Division took steps to provide cooked meals and drinking water to affected people in Peliyagoda, Bakinigahaela, Kirindiwela and Pugoda areas after reaching their temporary shelters.

Overflowing of the Deduru Oya and Thabbowa Wewa, has affected more than 200 civilians who remained stranded in Eluvankulama, Puttalam, Neelabemma, Thabbowa and those near Puttalam - Anuradhapura main road areas. Troops of 26 Gajaba Regiment (GR) with the assistance of the Air Force and Navy troops rescued them and accommodated in different places until the water level recedes.

Meanwhile, one officer and 40 Army personnel, attached to 1 Sri Lanka National Guard responded to the need and mended the damaged lake bund at Ellegedra tank in Wariyapola on Tuesday (17). Troops managed to prevent a major disaster by placing those sand bags around vulnerable points in the Ellegedara tank bund. On the same day, 143 Brigade troops had to take away a fallen tree from Puttlam-Anuradhapura road since it has disrupted vehicle movement.

Meanwhile, 16 (Volunteer) Gemunu Watch troops of the 58 Division hand in hand with Disaster Management Centre workforce and Coast Conservation Department staff stacked hundreds of sand bags along the coastal areas in Akurala, Ambalangoda to prevent rough sea waves flowing onto the Galle - Colombo main road because of coastal erosion. The project continued during Monday (16) and Tuesday (17). 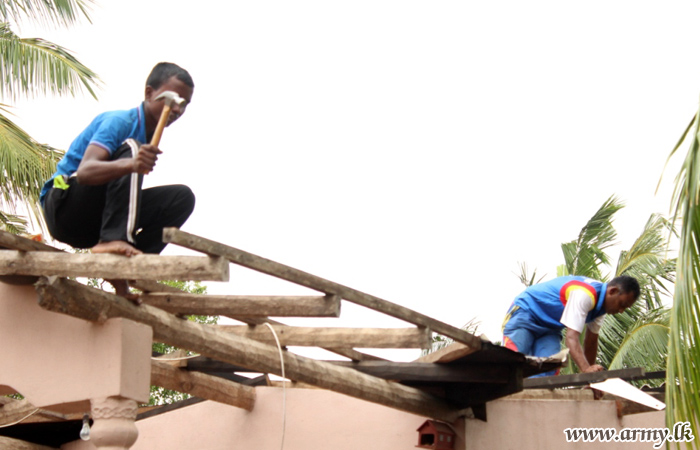