The second lot of the first batch, assigned for UN peacemaking missions in Haiti including 17 Officers and 292 Other Ranks of the Army, left for Haiti early on Thursday (28) morning amidst greetings and best wishes. The first UN batch left for Haiti in September with 14 Officers and 114 Other Ranks, a historical phenomenon as far as the Sri Lanka Army is concerned.

Hours before their departure, emotion-stricken next of kin of those Haiti-bound Army personnel led by their Commanding Officer Colonel Amal Karunasena shared their warm thoughts with their beloved ones who were present at the airport to bid au revoir. True to their hearts, some parents were seen feeding their UN bound sons in the Army with slices of milk rice, an auspicious token of the Sinhala tradition. Moment after moment appeared dramatic as this was going to be a novel experience to the Sri Lankan soldier who has toiled so much for the defence of his motherland. Some of their spouses in tears greeted their bread winners with hugs and warm wishes as the flight departure drew nearer.

Fellow Army soldiers who showed up as well-wishers on the occasion afterwards lined up at the apron and greeted their colleagues proceeding towards the aircraft waving UN and Sri Lanka flags. As two UN and Sri Lankan flag-bearing soldiers who lead the march wended their way to the aircraft, hundreds of their next of kin from a distance were seen extending their greetings by way of clapping and waving as the first light of the day was breaking.

Minutes after greetings, amidst rhythmic tunes of two bagpipers at the staircase to the aircraft, those UN peacekeepers from Sri Lanka boarded the aircraft after Chief of Staff Major General A. M.C. W. B Seneviratne, Deputy Chief of Staff Major General G. S. C Fonseka, Military Secretary Major General K. B. Egodawele and several senior officers shook hands with each and everyone of them and said goodbye to them, extending their best wishes on behalf of the Commander of the Army and the Army. 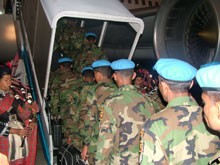 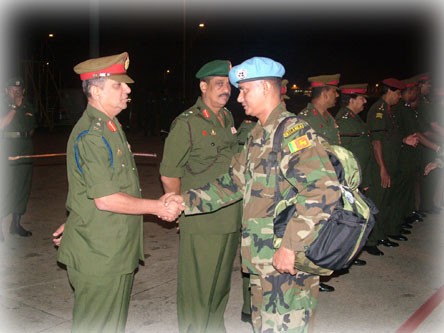