The battlefield-experienced Sri Lanka Army with its life span of 55 years made history again on Saturday (25th September 2004) when its Commander Lieutenant General S. H. S Kottegoda extended his best wishes and bade au revoir to his military men bound for Haiti on UN Peacekeeping missions en masse for the first time in Army's history.

The historic occasion at the Bandaranaike International Airport (BIA), Katunayake, filled with spirits of dignity, pride, excitement, delight and hope manifested the enormous interest that has been created not only among troops but also among many sections of the common people whose sons and daughters form the nucleus of this country's security.

The Army's first batch of 128 (14 Officers and 114 Other Ranks) of a designate 750 strong UN contingent left for Haiti at about 1.00 p.m. this afternoon on a UN chartered aircraft after they were accorded a grand military farewell at the tarmac at BIA amidst religious observances, delivery of National Flag, UN flag, Army flag and the Regimental Flag (Sri Lanka Light Infantry), Parade Command, cultural troupe performances, salute from children of UN troopers, etc.

After UN contingent arrived at the BIA, those troops received religious blessings from dignitaries belonging to all major denominations before they attended to travel formalities and took leave of their next of kin. The major ceremony at one side of the tarmac began after arrival of the Commander who was received by the Chief of Staff and the Colonel of the Regiment, Sri Lanka Light Infantry.

Symbolic of the importance of the event, the National flag was then handed over by the Army Commander to the Parade Commander of the UN troops Lt. Colonel T. N Jayasuriya who in turn presented it to one of his troopers.

Former Chief of Defence Staff and Commander of the Army General L. P Balagalle (Retd.), during whose tenure of office this UN initiative was mooted and successfully initiated, presented the UN flag to the Parade Commander of the UN troops.

The Regimental flag of the Sri Lanka Light Infantry was finally delivered to the Parade Commander by Colonel of the Regiment, (SLLI) Major General N. Mallawarachchi who in turn returned it to one of the troopers.

The ceremony reached its highlight with rousing finale when the conch-shell blowers coupled with drummers, flag bearers and the brass band players conducted the departing troops towards the aircraft while children of those troopers lined up and cheered waving Sri Lankan and UN flags.

It was a moment of emotional happiness, sadness and excitement, particularly for troopers who in many instances leave overseas for the first time in their career after leaving behind their beloved ones. Many kith and kin of the UN troopers were seen dropping tears but their faces appeared replete with hope and prosperity as bag pipers tuned with a slow but touching beat of music.

A large gathering of Senior Army Officers was present on the occasion at the airport to see the Army's first contingent off to Haiti. 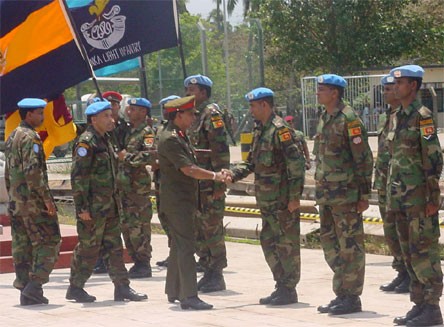 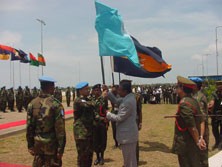 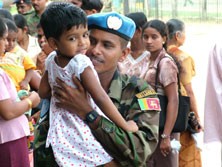 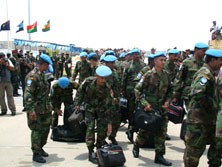