The formal inauguration of the series of religious ceremonies on account of the forthcoming 72nd anniversary of the Sri Lanka Army (October 10), the most admired, dedicated and fondly recognized as the ‘Protectors of the Nation’ began on Monday (27) evening at the sacred city of Kandy with offer of Buddha Pooja, Flag-blessing and offer of ‘Gilanpasa’ to the Buddha and Buddhist monks in the Sri Dalada Maligawa (Temple of Tooth) compound where the most sacred relics, ‘Shareerika’, ‘Paribhogika’ and ‘Uddeshika’ as living monuments of the Buddha and his disciples, remain enshrined for veneration.

The guiding leadership of the organization, General Shavendra Silva, Chief of Defence Staff and the 23rd incumbent Commander of the Army as the main protagonist for the day's inauguration of low-profile anniversary ceremonies was received on arrival by Major General Priyantha Perera, Chief of Staff, Major General Sampath Kotuwegoda, Deputy Chief of Staff, together with Major General Vikum Liyanage, Commander, Security Forces-Central, Major General Kithsiri Liyanage, General Officer Commanding, 11 Division and other Senior Officers. The religious programme was also meant to invoke blessings on the country and seek spiritual powers to eradicate the COVID-19 epidemic from the country.

As has been the practice, colourful Army flags, including the Sri Lanka Army Volunteer Force, all Security Force Headquarters, Forward Maintenance Areas, Divisions, Brigades, Regiments, Training Centres and formations across the country that add symbolic value to the living memory, dignity of the organization and all members serving each of those wings, took the centre-stage of attraction this evening (27) as those flags were taken respectfully in procession to the upper chamber and the ‘Paththirippuwa’ (octagon) of the Dalada Maligawa by representative Officers of each unit, led by the Chief Guest, General Shavendra Silva.

As the Head of the organization, the Commander of the Army carried the Sri Lanka Army Flag at the front of the procession for symbolic invocation of blessings. Flags were subsequently delivered to the monks in charge of the ‘Thevava’ at the upper chamber where chanting of ‘Seth Pirith’ and conduct of religious observances invoked blessings on the Army’s long journey for defence of the country.

Malwathu Chapter General Secretary Ven. Dr. Pahamune Sumangala Nayaka thero, Shyamopali Chapter in Maha Vihara, performed religious observances with members of the Maha Sangha at the upper chamber and invoked blessings on the organization and spoke high of the achievements that have been hitherto made by the Army for the greater benefit of all Sri Lankans and betterment of the country as the organization that salvaged the country from a three-decade of blood-shed and recent violence. The whole of the arrangement was meticulously organized by the 11 Division Headquarters in Pallekele, Kandy under the close supervision of its General Officer Commanding.

Mr Pradeep Nilanga Dela, Diyawadana Nilame (DN), the lay chieftain extending greetings on the anniversary welcomed General Shavendra Silva at his office after he paid respect to the inner chamber, along with ‘Gilanpasa’ Puja offerings, amid beating of traditional drums. Soon after those traditional rites and ‘Thevava’ rituals of the day were over, the Commander on behalf of all in the Army, made a symbolic monetary donation to the Sri Dalada Maligawa at the Diyawadana Nilame’s office, a customary feature in anniversary arrangements.

This year's arrangement, restricted only to a minimum gathering of All Ranks adhering to best health practices first formed up near the main gate to the Sri Dalada Maligawa with all Army flags, held in their hands as the day's itinerary were to start off with the arrival of the Army Chief.

The country's prime watchdog for defence of the motherland with an unmatched record of gallantry and selfless sacrifices, now engaged in a variety of multi-faceted national security and nation-building tasks of formidable nature was founded on 10 October 1949 as the Ceylon Army forming its first regular force under the command of Brigadier Roderick Sinclair, the Earl of Caithness through the Army Act No. 17 of 1949. Blossomed into a full-fledged Army during its life-span in the past 72 years, the Sri Lanka Army to-date had been effectively commanded by 23 Commanders, elevating the organization to impressive heights. Its expansion with 25 Regiments with combat arms, support arms and support service arms has won the hearts and minds of all ethnicities across the country as the most people-friendly security provider to all at the expense of their own lives. 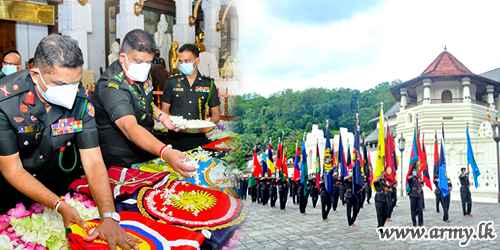 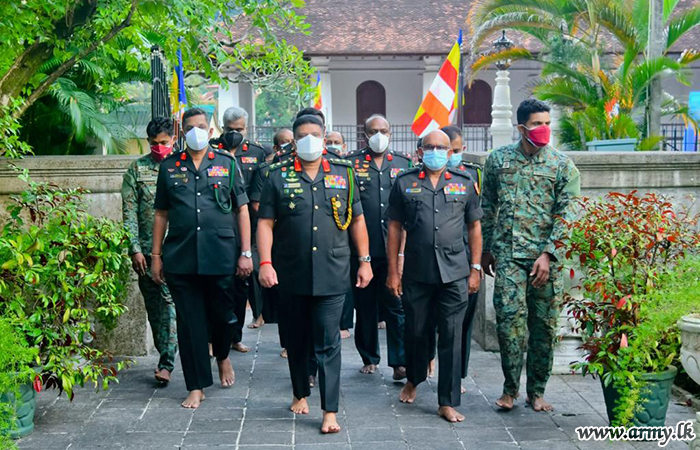 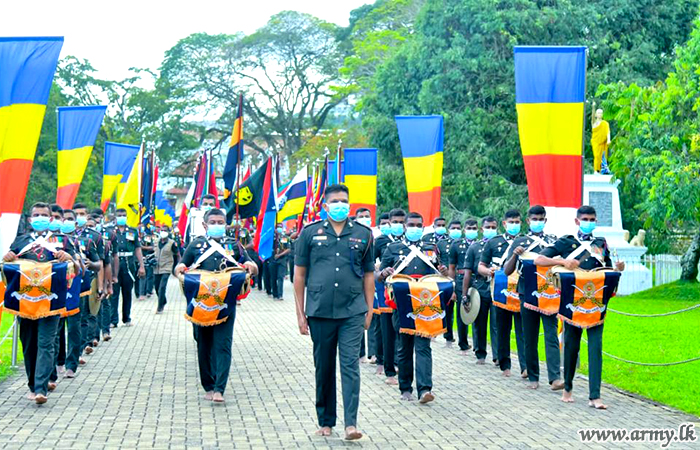 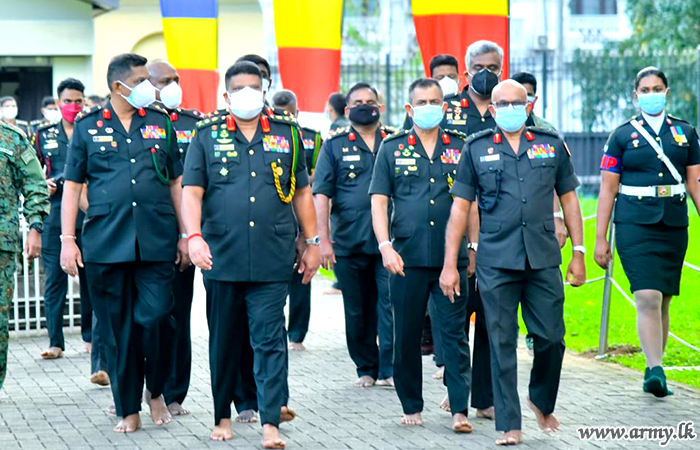 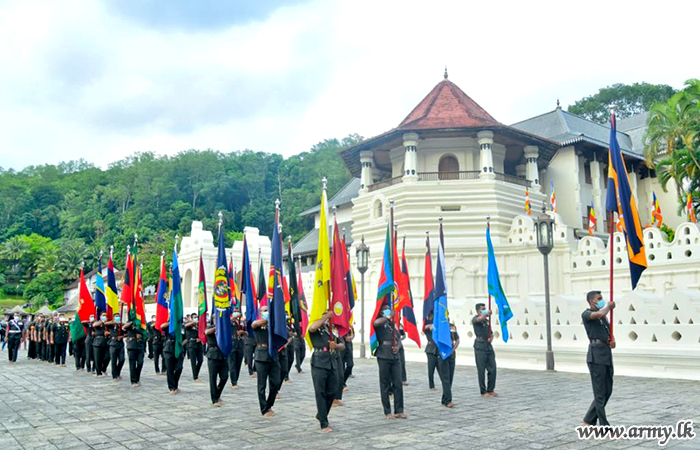 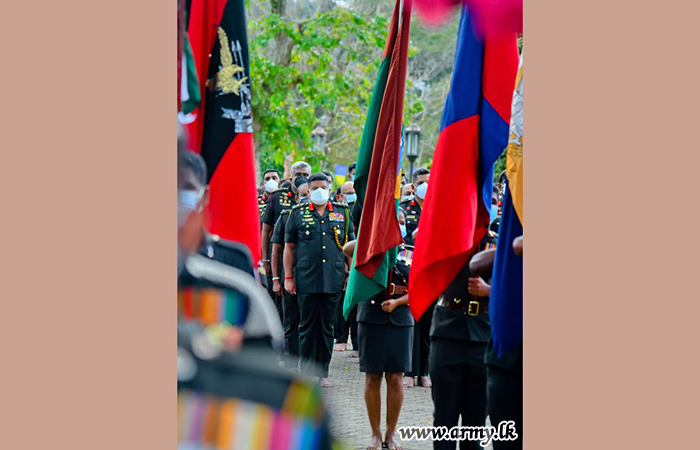 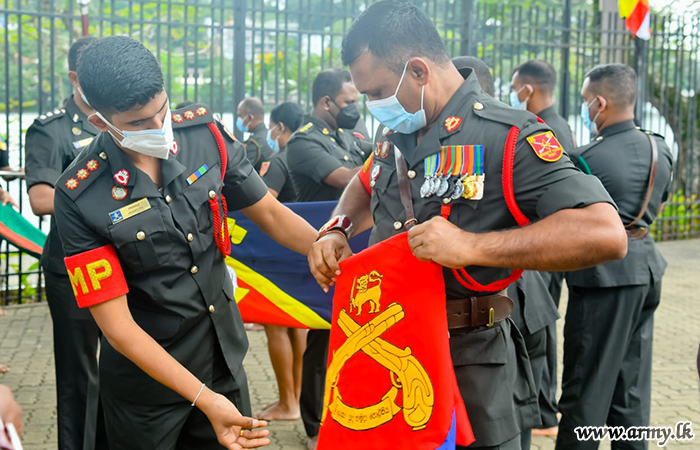 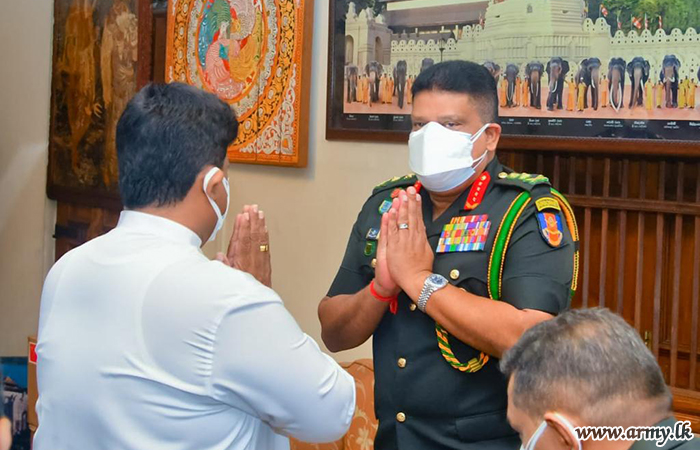 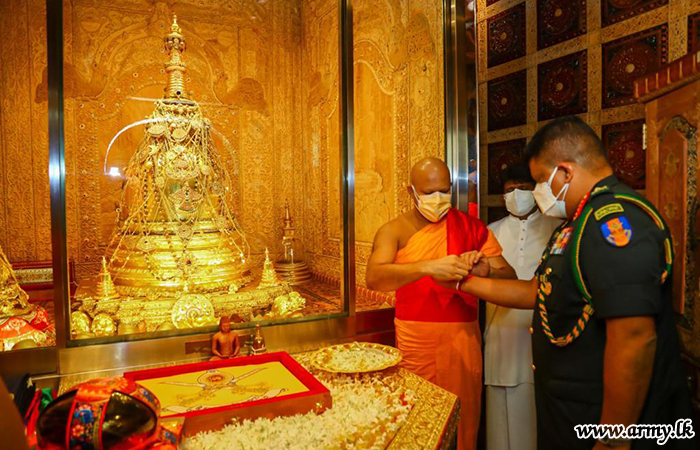 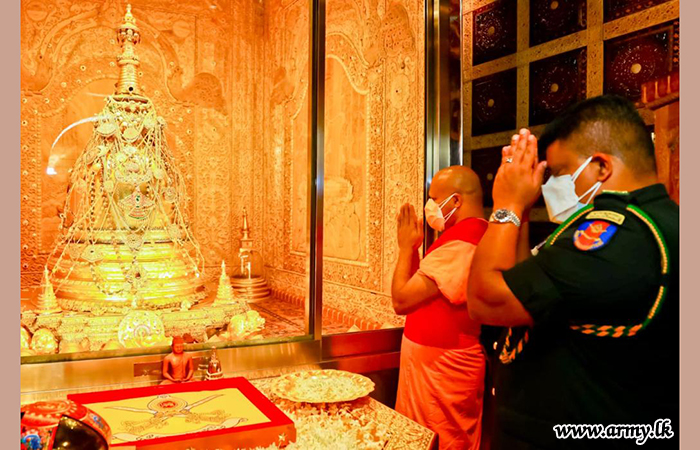 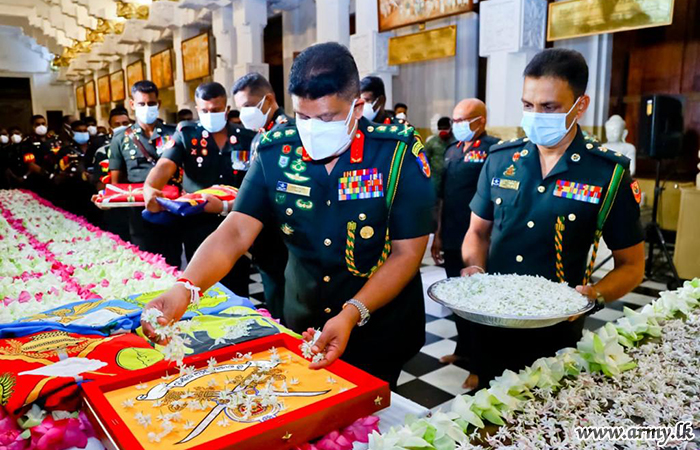