Except for a few hiccups, Army maintained a superb record beating fancied teams which included many national players. The soldiers have become a prominent force in the sporting arena after the dawn of peace in the country. Cricket being the most popular sport in Sri Lanka, the Army’s invasion into it would have drawn shockwaves on club cricket and national level cricket. With Army winning recognition as a strong emerging force in Sri Lankan sports, the Daily News spoke to the Army Cricket Committee secretary Col. Shiran Abeysekera and the Army cricket coach Pasan Wanasinghe.

How do you describe the Army’s road to the Premier T20 crown?

SA: It is the highest ever achievement by Army in top class cricket and it was achieved by great team effort. Army has multi talented players whose dedication towards this victory is remarkable. We have been performing well over the last four years by beating top clubs. Talent and team spirit entwined with discipline made the winning combination. I think the national selectors should look at the talent to harness Sri Lanka cricket in future. I should praise the Commander of the Army for his numerous support together with chairman Major General Ajith Wickremasinghe, former Chairmen Maj. Gen B.R. Silva, Maj. Gen. Ubaya Medawela and all members of the Army cricket committee including the supporting staff for their unstinted support.

What are the other sports Army have already excelled in?

SA: We are into over 35 sports. Athletics, Volleyball, Boxing, Karate, Motor Racing and Wheelchair Tennis are prominent among them. Even the Olympic silver medalist Susanthika Jayasinghe represented the Army. We are very proud to have few top ranking wheelchair tennis players in the Army who are among the world’s best 100 players.

Has the Army pumped big money into sports in recent times?

SA: The soldiers had courageously won the war and now they are concentrating more on sports to bring glory to the country with their hidden talent. We have the best facilities compared to other sports clubs. Recently we have invested in the latest cricket equipments like bowling machines and video analysis equipments. We have provided all necessities to the players and looking after them very well. We hope to contribute more to the national and international level of sports.

Around how many national level sports personnel have been given employment in the Army and what is the Army’s policy?

What are the Army’s future plans to emerge prominent in the sports field?

SA: We have maintained a superb sporting record over the years and hope to be the best premier institution bringing glory and honour to the country at international level. In doing so the Army will not only invest in cricket but also on other sports in a big way.

Is this victory a miracle or something you expected from the beginning?

PW: It was not a miracle. Army played in division I in 2014 and was relegated to division II in 2015. With their champion performance in division II, we were once again promoted to division I this year and we proved our potential. Even though we only had two national players who are quite famous, there are plenty of talented lesser known players in the Army who can change the fate of a match.

We entered the tournament with confidence and won the first two matches against Badureliya and CCC. We were unlucky at one stage and lost to Colts and Chilaw Marians. We regained our confidence after the victory over Ports Authority and when we scored a crucial victory against Tamil Union in the group stage, we strongly felt our true potential. The superb captaincy of Seekkuge Prasanna who had an excellent bowling spell and Asela Gunaratne’s classy knock of 65 not out in the final made the task easy for us.

What is your assessment on the other two formats of cricket in the Army?

PW: I started coaching the Army about seven months ago. This year’s T20, one-day and three-day tournaments were worked off in between in a short space of time. What I see is players should be given more time to get adjusted to different formats otherwise you can’t have a fair assessment of them. We could not perform prominently in the one-day tournament merely because of rain. We had to be satisfied with six points and had three wash-outs that prevented us from reaching the semis.

In three-day cricket, we had a bit of a batting failure and paid the price with two early defeats against NCC and Galle CC. I believe the team needs more time to focus on the three-day format.

It is not the talent, but a matter of time for these soldiers. They will excel in all three formats of cricket soon.

With only two national players in the side how did the Army overcome top sides like SSC, Tamil Union and NCC?

PW: I must tell you these Army players are very brave and not shaken by the big names of rivals. They also play with their spirits high. Though we had setbacks at some stages the soldiers teamed up gallantly to achieve their target whenever needed. I am sure there will be more Army players in the national squad very soon. They only need time to mould up with experience.

What was the toughest match of the tournament?

PW: The group match against Tamil Union at NCC. Even though Ajantha Mendis helped restrict the opponents to 165/7, Tamil Union bowled well to defend their total. At one stage we were 102/7 and seemed like getting control of the game but we played into their hands. It was Janith Silva’s excellent knock that turned the tide for the Army. Shalika Karunanayake also batted well with a half ton. How do you enjoy coaching the Army and how confident are you with the team?

PW: My short experience with them is very interesting. Winning a national title within a short period gives you great courage. They are well disciplined and co-operative. It is easy to work with them and you feel their true spirit in and out the field. Their commitment to a given task is remarkable. I am really proud of them and I hope to give by best to Army cricket. I am sure the Army will be a force to reckon with in Sri Lankan cricket. 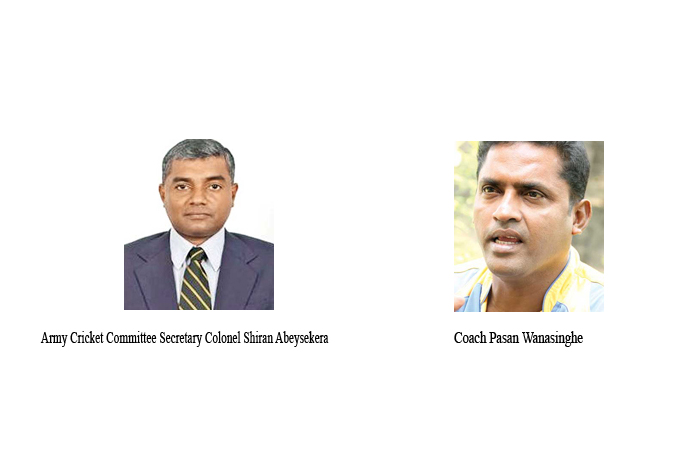