Smiling families in Maravanpulam meet architect of their village

Ninety-eight families in restored Maravanpulam Peace Village in Thanankilappu, Jaffna are to receive more and more arable land for cultivation after ongoing Army de-mining work in the earmarked area is over in a short span of time.

The restored Maravanpulam Peace Village became a reality after the Army took initiatives in 2004 under the then Commander of Security Forces Headquarters, Jaffna Major General M. D. S Chandrapala, Deputy Chief of Staff who under the auspices of the Army Commander Lt General Shantha Kottegoda put the project into effect with the support of donors.

The area earlier infested with mines and other unexploded devices had to be cleared at first with the support of the Army Engineers, who by then have commenced their de-mining work in the north with the support they received from the US Government and RONCO Consulting agency.

Army Engineers after their initial stages of mine clearing were over, displaced villagers were allowed into their old dwellings, re-named as restored Peace Village for resettlement of those families.

Troops well conscious of the needs of the re-settlers opened a kiosk with daily needs at the entrance to the Peace Village, built and repaired all roads that lead into the village, got a bus service operated and opened up a medical unit plus a midwife centre in addition to clearing of a play ground for children.

Likewise, with the funds received from the World Bank, troops constructed a Community Hall and helped the farmers by way of providing manure and other essentials through Army vehicles. They also relaxed fishing restrictions hitherto imposed on fishermen in the village.

Major General Chandrapala recently paid a surprise visit to the village and saw for himself what else was left to be done for the greater benefit of the community there.

Giving a patient hearing to what those villagers got to say, Major General Chandrapala instructed his senior officers managing the affairs of the village to provide solutions to their difficulties as soon as possible. More and more land is also to be released for cultivation once those areas are cleared of land mines.

He also assured the villagers, who flocked there to greet him of all future assistance in areas such as release of more and more mine-free cultivable lands, etc. 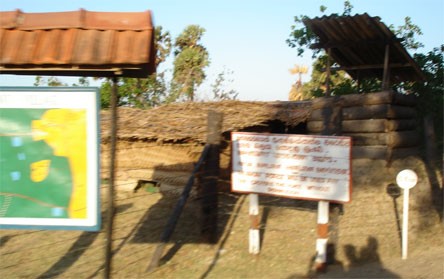 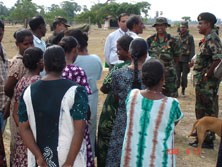 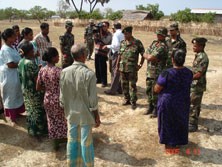 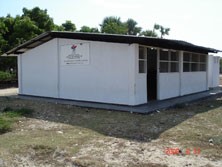