The formal inauguration of the series of religious ceremonies on account of the forthcoming 67th anniversary of the Sri Lanka Army (October 10), the most admired, dedicated and well recognized as the ‘Defenders of the Nation’, began on Wednesday (28) at the sacred city of Kandy with offer of Buddha Pooja and alms to 67 Buddhist monks in the Dalada Maligawa (Temple of Tooth) where the most sacred relics, Shareerika, Paribhogika and Uddeshika as living monuments of the Buddha and his disciples, remain enshrined for veneration.

A tray of jasmine flowers, coupled with the traditional offer of ‘Muruthen’ and ‘Gilanpasa’ Buddha Poojas was then offered to the inner chamber of the Sri Dalada Maligawa by the Commander before religious observances were performed, amid beating of traditional drums (Shabdha Pooja). Soon after those traditional rites and rituals of the daily Thewawa were over, the Commander on behalf of all in the Army, donated a symbolic monetary donation to the Sri Dalada Maligawa at the Diyawadana Nilame’s office. Mr Pradeep Nilanga Dela Bandara, Diyawadana Nilame (DN) extending greetings on the anniversary accepted the gesture. Governor for Central Province was also present in the DN’s office at the same time.

Lieutenant General Crishanthe De Silva together with other senior officers offered alms to the monks and listened afterwards to the Anusasanas (orations) of the monks who invoked blessings on the organization and spoke high of Army achievements for the betterment of the country. The Penwedeema ritual towards the end of the alms-giving transferred merits on all fallen War Heroes and others who had served the organization since its inception. 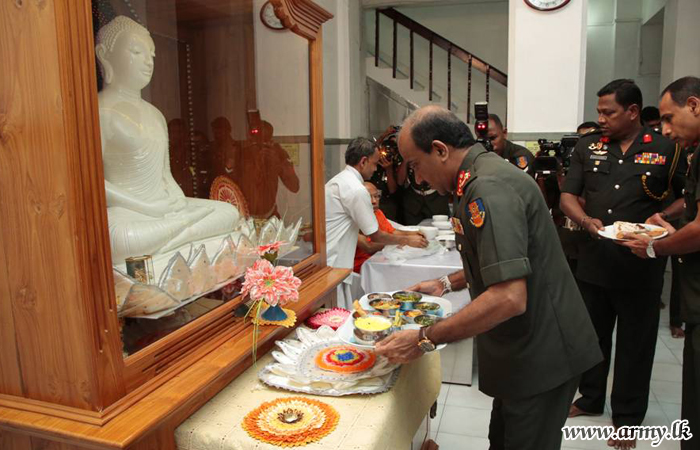