President Maithripala Sirisena during his convincing and elaborate address to the launching ceremony of the ‘Virusara’ Privilege Card at Temple Trees this evening (25) emphatically told the gathering that he and his government were working towards rejuvenation of our deprived national and international relations with the aim of creating a society that all ethnicities could live in harmony without any fear.

“To achieve that status, having fought well over 26 years, we have a difficult journey ahead. Civil organizations as well as international organizations expect justice be done to some alleged atrocities, said to have been committed. Those have led to public agitation. We need to clear those hurdles and convince both here and abroad that we are genuinely committed to clear the name of our forces. How do we do this ? Are we trying to get back to tribal times of the stone age or are we to march ahead as a civilized society to match with fast changing global trends in this digitalized era ? By holding proper investigations and applying the arm of law only we could think of getting our country’s tarnished image removed. It does not mean that we are jeopardizing the security of our State Intelligence agencies, nor does it try to betray their services to the country. To bring about reconciliation, we need to hold impartial inquiries into a few cases which sent shock waves among the locals as well as the agencies like the UN. People in this country voted for us in 2015 to see that justice was applied. When justice does not work, civil organizations agitate and criticize us. If that credibility could not be restored, our troops will continue to be marginalized, discredited and condemned as an unprofessional group and will definitely have to face dire consequences. To avoid this risk and the danger, we got to find out the truth, we have to continue with credible processes, and that would be the only way out for our forces,” the President underlined.

When we are setting the correct mechanism to investigate and extract the truth, we are accused of betraying our brave servicemen, sabotaging our intelligence networks, arresting those involved, dividing the country and reforming our Security Forces to the whims and fancies of foreign powers, etc purely based on their narrow-minded political agendas. I wish to categorically deny having any such ulterior motives. All our attempts are geared to create a conducive environment where resurgence of another round of war does not find space in this country, President Sirisena added.

“Should we return to the tribal times and be communal-minded to live in a medieval society, fighting on the lines of ethnicity, religion, language, caste, tribe, etc, etc ? Is that what we want in this country ? Some talk of ‘blood’ (le) these days and try fanning communal passions. All the countries that fought bitter wars afterwards realize the gravity of blood-letting and put their heads together to treat the root cause for emergence of wars or terrorism. Sri Lanka does not need any more wars, nor can her people afford another round of violence. I myself escaped death in LTTE violence five times. Due to some karmic forces, those savages could not hurt at least a hair of mine. This country had enough bloodbaths and the pride and glory left behind by our ancestors were lost in the face of brutal violence. Any sensible man would not like to see repetition of such brutality. Those are the challenges that we have to overcome for the best interests of the country,” the President remarked.

“Myself or my government would never allow anyone to degrade our armed forces, nor we would let them down at international level either. For us to be in parallel with international forces, we have to however get our tarnished name cleared, first. These ongoing investigations are not in anyway targeted towards any segment of our servicemen or a particular group, nor are they meant to demoralize our forces or weaken their services. These investigations serve us well to clear our name and restore our decency as a civilized country. We need to enter the world of professionalism and technology to be on par with recognized armies in the world. During my overseas visits, I appealed to statesmen including the UN to support enhancement of the professional knowledge of our armed forces by way of providing technologically advanced know-how. Those foreign leaders positively responded to my request and are now in the process of pledging that support to us by opening new avenues for our armed personnel in UN assignments,” he pointed out.

The world is universally closely connected with one another and one cannot live in isolation on the basis of tribe, religion or on any other concern. Sri Lanka has to go hand in hand with global developments and trends as we are now living in a world of digitalization. So are our armed forces. Therefore, we all have to work and think afresh and do our part for the sake of peace and reconciliation of this country, for the betterment of our future generation, not for gaining petty political advantages. I recall with respect and gratitude that our troops succeeded in eliminating terrorism physically to unify this country at the expense of their lives and physical organs, for which we are indebted to them forever. However, it is high time for us to now remedy the root causes, attributable to the emergence of the bloody war, a brutal war that lasted in this country for more than 26 years, claiming thousands of our precious lives. It also backtracked our shining prospects for another generation or so, thus depriving us of an advanced country, the President quipped. 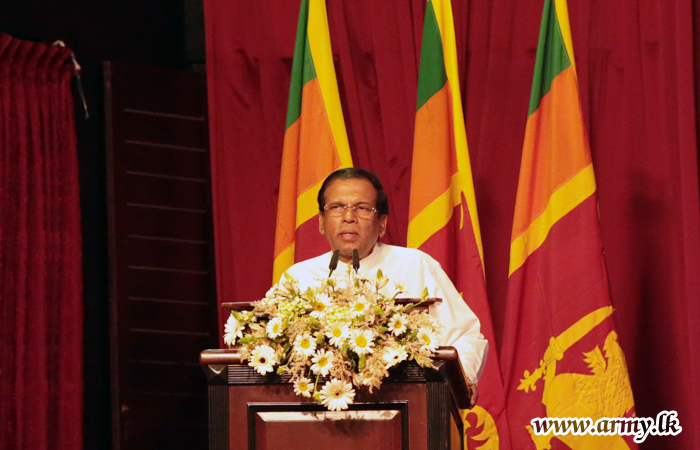 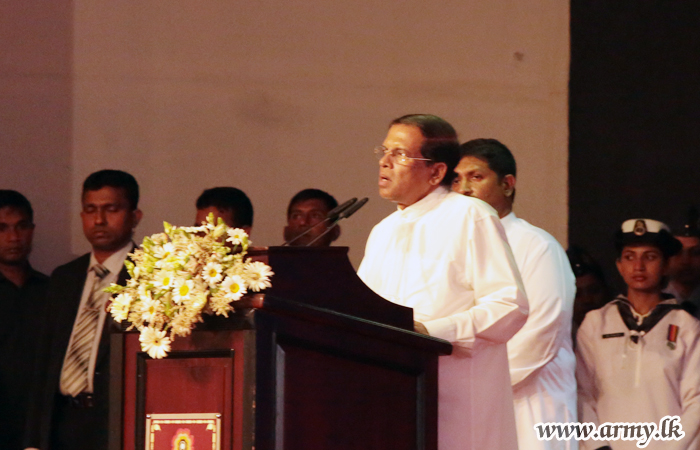 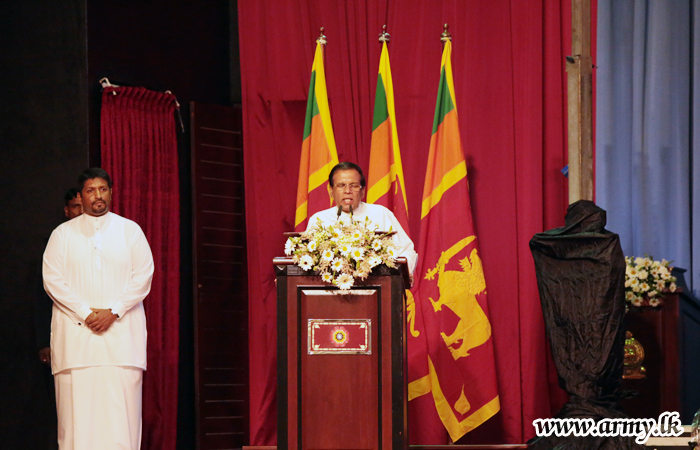 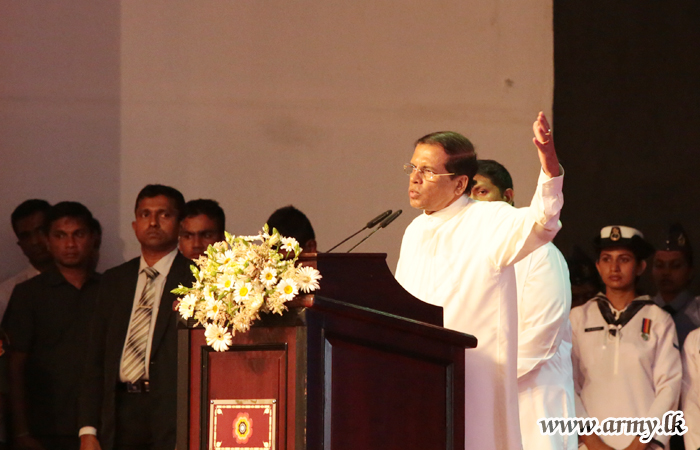