The growing public interest and confidence in the Army's multifaceted nation-building prowess as well as its people-friendly commitment for uplift of community welfare, became clearly evident this morning (17) in Jaffna when Dr Sidambaran Mohan, President, Farmers' Asociation of Vadukkodai Southwest and 'Friends of Jaffna', the non-governmental organization, publicly heaped high praise on the Army and its head, Lieutenant General Shavendra Silva, Chief of Defence Staff and Commander of the Army for his invaluable dedication during the ceremonial inauguration of one more Army-renovated and reclaimed agricultural tank in Vaddukkodai, named ‘Uppu Vayalkulam’.

In what could be considered as another milestone in civil-military solidarity and bonds of sound reconciliation that has now taken root in the Jaffna peninsula, troops under the SFHQ-Jaffna, belonging to 10 Field Regiment of Sri Lanka Engineers and 11 Sri Lanka Light Infantry troops under the supervision of Brigadier Mohamed Fariz, 513 Brigade Commander and Major General Sumith Premalal, General Officer Commanding 51 Division fully accomplished the Uppu Vayalkulam’ tank re-excavation and renovation project on the directions of Major General Senerath Bandara, Commander Security Forces - Jaffna.

Adhering to the best practices of social distancing, farmers, headed by Dr Sidambaran Mohan, together with the day's Chief Guest, Lieutenant General Shavendra Silva sanctified the re-dug tank by pouring holy water into the tank that has been brought from the Indian river Ganges by the architect of the project, Dr Sidambaran Mohan after the Commander of the Army opened the name board and a plaque as tokens of memory.

Years back, the tank provided adequate water resource for farming lands in surrounding villages, and later it remained unattended and ended up with dry bottom due to reduction of retention capacity, shortfall of rain and other reasons. Mr Vamadewa Tyagendran, the Head of ‘Thiyahie Charitable Trust’ funded the mega renovation project undertaken by the Army on request which brought new hopes for the deserving farmers in Vaddukkodai area. The renovated tank would provide water resource sufficient to cultivate 4000 acres of farming lands and for more than 600 families.

In his brief speech to the occasion, Dr Sidambaran Mohan publicly praised the Army for its people-friendly cooperative, construction, development, housing and other welfare roles with a special word of praise and appreciation to the Commander of the Army. "Let me appreciate wholeheartedly of the services of the Army, particularly the role of the incumbent Commander of the Army and his untiring commitment towards the nation-building tasks, rescue and evacuation of innocent people during disasters, support for their livelihoods, award of houses, and all forms of welfare of northerners whenever they are in distress, Wanni humanitarian operations, arrest of COVID-19 virus, etc. We highly appreciate and admire you and wish to invoke blessings of all deities on all your endeavours", he added. Dr Mohan also sought the support of the Army Chief to eradicate the drug menace from the country as youths are falling prey to it in the North too.

A member of the farmer community in Vadukkodai meanwhile spoke out his mind in an emotional manner on the same occasion and quipped: " Sir, you have saved our children, you have promoted sports among our youth, now you have bestowed us with plenty of water for agricultural work. Your brave and exemplary leadership qualities no doubt have elevated you to be one of the distinguished national leaders of our Nation and you have given your service as a brother of the same family and done so much for us. Even nature itself has blessed our projects after downpours that lasted before today. May all blessings be with you and give you the strength necessary to get our Jaffna youth rid of addiction to drugs and Ganja (cannabis). You will be loved forever, " he added. (See video below)

SFHQ-Jaffna troops under the guidance of Major General Senarath Bandara, Commander, Security Forces - Jaffna, in response to the request of Dr Sidambaran Mohan, and in close coordination with Mr E Nishanth, Assistant Commissioner of Agriculture Development Board, Mrs Premani Ponnambalam, Divisional Secretary of Walikamam West and Mr K Maheshan, District Secretary for Jaffna, carried out reclamation and renovation of this tank within a few weeks using Army machinery.

Troops on request used their heavy machinery and manpower to complete the project in consultation with all respective state agencies, including the Agrarian Development Department since it remained totally dried up and stagnant, filled with earth and was unable to retain the full capacity of rainy water, much-needed for farming and cultivating projects in adjoining areas throughout the year.

During this morning’s brief ceremony near the tank, Lieutenant General Shavendra Silva unveiled a plaque and symbolically delivered documents, pertaining to the renovation to state officials of the Agrarian Development Department who provided necessary technical guidance for the entire renovation project.

Giving a few Media comments on the banks of the tank, Lieutenant General Shavendra Silva said the waters in the tank would benefit 600 families in the Chankanai Divisional Secretariat and 4000 more acres of paddy fields could use its water. "Sri Lanka Army will always support the well-being of Tamil people and for any of their requirements or any other matter of concern to them. In recent floods and the cyclone 'Burevi', Army troops did everything possible to look after them in closer coordination with government authorities and particularly with greater warmth, compassion and reconciliation. It is also noteworthy to mention here that the Jaffna troops with state or non-governmental sector or individual sponsorship have so far built 740 new houses for deserving families in the peninsula. More projects will commence to erect more houses considering it as a prime responsibility and a part of nation-building. As requested by some parents here, we will also assist prevent Jaffna youth from falling prey to drug addiction in future," he elaborated. He also explained the status quo as regards the arrest of COVID-19 epidemic in the country. 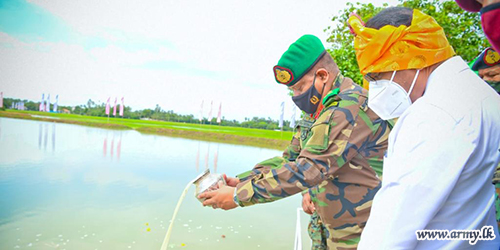 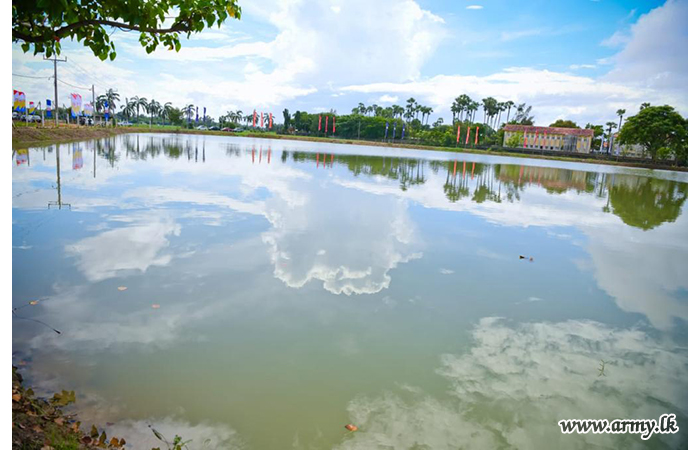 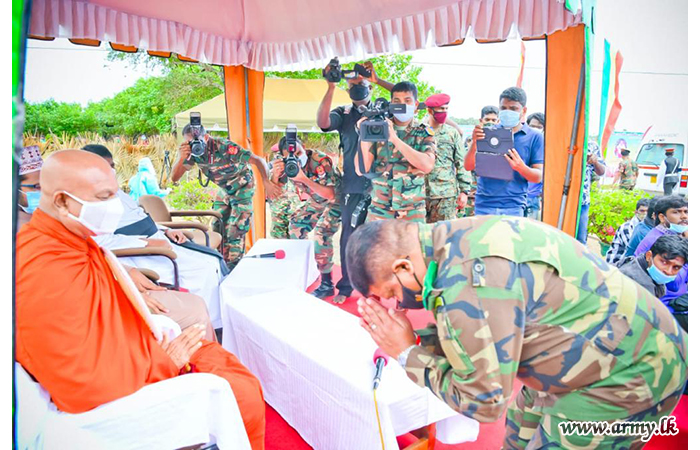 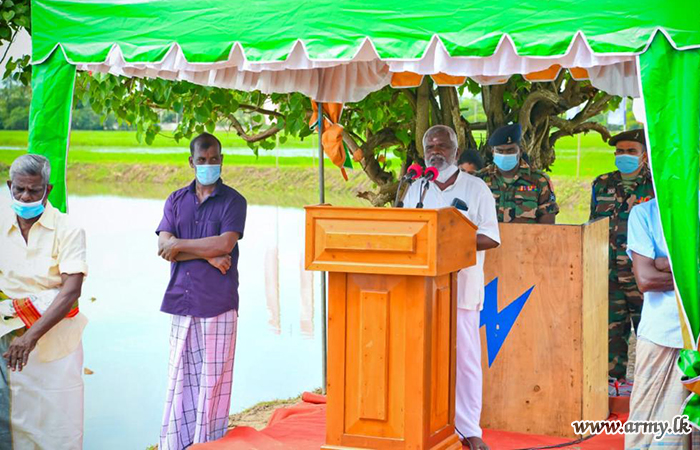 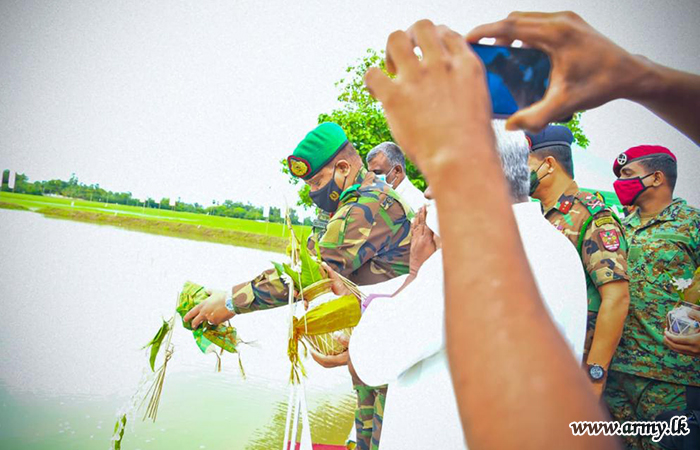 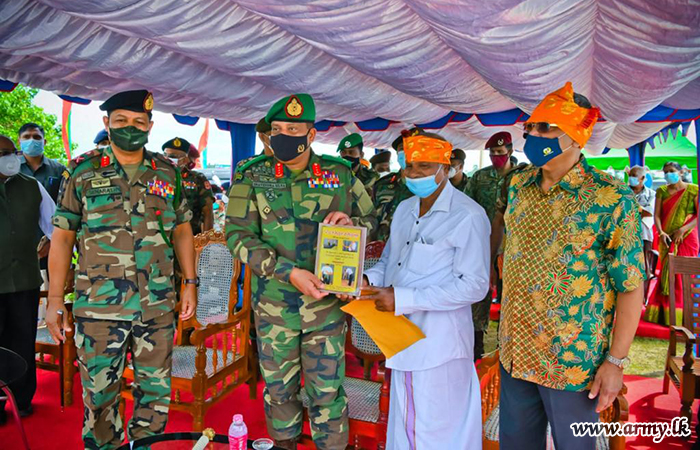 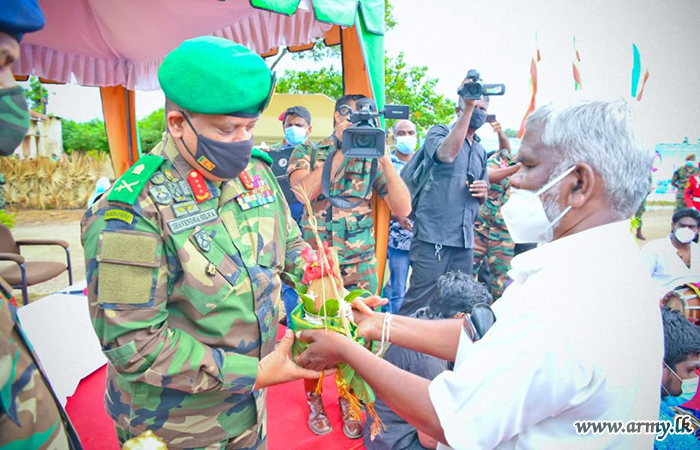 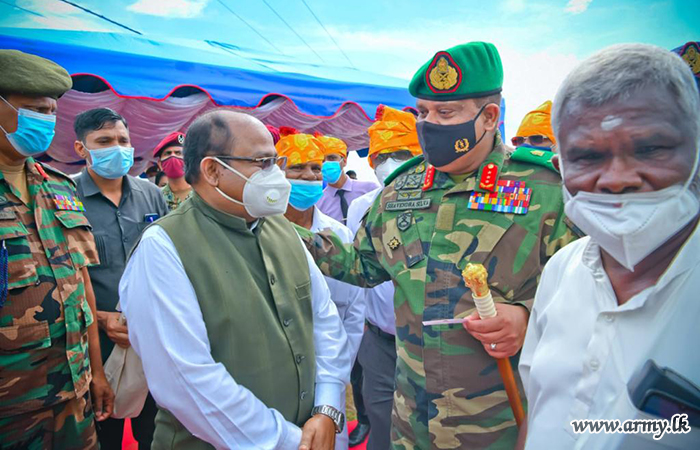