The Security Force HQ-Kilinochchi (SFHQ-KLN), giving an exceptional prominence to the house construction project for needy civilians as instructed by the Chief of Defence Staff and Commander of the Army General Shavendra Silva, in another impressive gesture built three more houses and vested them in deserving beneficiaries with the objective of promoting reconciliation and improving their living standards.

With energetic guidance and leadership given by Major General Harendra Ranasinghe, Commander, Security Forces - Kilinochchi, a collective effort of troops of the 5 (V) Mechanized Infantry Regiment (MIR) and the Security Force HQ-Kilinochchi (SFHQ-KLN) built a new house for the family of Mr Sinnavi Nawarathnam in Kasikuda, Pooneryn and Major General Harendra Ranasinghe, Commander, Security Forces - Kilinochchi symbolically delivered the keys to the beneficiaries on Friday (16) participating in the event as the Chief Guest. Funds for raw materials were made available to the project by Mr Prabhath Weeragama of Piliyandala who volunteered to offer the major share of the cost as the main sponsor, together with few others through the coordination of the Commanding Officer 5 (V) MIR, Lieutenant Colonel E.R.A Silva and a few other donors .

5 (V) MIR troops contributed their manpower and technical skills for the erection of the new house. Amid Hindu religious rites and rituals, the new home was inaugurated after the Chief Guest cut a ribbon and unveiled a plaque. The General Officer Commanding of the 66 Division Major General Ajith Dissanayake and the Commander 663 Brigade Brigadier Subashan Liyanagama, Commanding Officer 5(V) MIR Lieutenant Colonel E.R.A Silva were associated with the project by giving guidelines.

In addition, 5 (V) MIR troops on their own gifted a stock of household furniture, appliances, dry ration packs, fresh vegetables and several stationery packs for children of the beneficiary at the same inaugural ceremony.

In the meantime, 24 Vijayabahu Infantry Regiment (VIR) troops of the SFHQ-Kilinochchi on the instructions of the Commander Security Forces- Kilinochchi, Major General Harendra Ranasinghe erected one more new house for a needy family in Maduwilnadu, Kilinochchi, sponsored by Mr Lolitha Lasantha of Colombo and vested it in the beneficiaries on Friday (16) during a simple ceremony.

The community project, aimed at promoting gestures of reconciliation, goodwill and harmony was completed by 24 VIR troops under the supervision of the Commanding Officer Major S.H. S Kumarasinghe.

In addition to their construction expertise, the same battalion troops were generous enough to donate a stock of essential provisions and household items for the family of Mr. Ramanadan Maniwaththan Maduwilnadu, Kilinochchi area, the beneficiaries whose family was without a house for so many years. In keeping with Hindu traditions, Major General Harendra Ranasinghe, Commander, Security Forces Kilinochchi as the Chief Guest, together with the Divisional Secretary for Pooneryn, General Officer Commanding of the 66 Division Major General Ajith Dissanayaka, Commander 663 Brigade, Brigadier Subashan Liyanagama, OIC Police Station Pooneryn and Other Ranks who accomplished the project unveiled a plaque and symbolically cut a ribbon with beneficiaries before the new house was warmed. Simple religious rites and rituals of Hindu tradition blessed the new home.

Similarly, Major General Harendra Ranasinghe, Commander, Security Forces Kilinochchi as the Chief Guest offered one more new house to the family of Mr. Arumugam Naguleshwaran, Mailwanapuram, Pilimanthanaru, sponsored by Mr Gokulan and built by 14 Sri Lanka National Guard (SLNG) troops. The warming ceremony took place on Tuesday (13 July), adhering to health regulations. The project, conceptualized by the Army Chief with the objective of promoting goodwill and reconciliation and uplifting of living standards of of poor people in the north, has by now completed the construction of nine houses as of today (22) out of 11 proposed houses, 2 of which are still in progress.

Moreover, Battalion troops managed to provide required household appliances, dry ration packs, fresh vegetables and stationery packs for children in the family as incentives. The project was completed under the supervision of the Commanding Officer, 14 SLNG, Major Chaminda Wanniarachchi.

After inauguration of all these three new houses, gifts from the troops with the support of philanthropists, Major General Harendra Ranasinghe commended the Kilinochchi troops for taking an enormous interest in house-construction projects for needy civilians, in many instances even pocketing out their own money for the best interest of those homeless civilians. Many of those families were living in shanties or in tin sheet-thatched huts without proper safety or security for their daughters, children and women when the SFHQ-KLN undertook the project which is now in full swing. 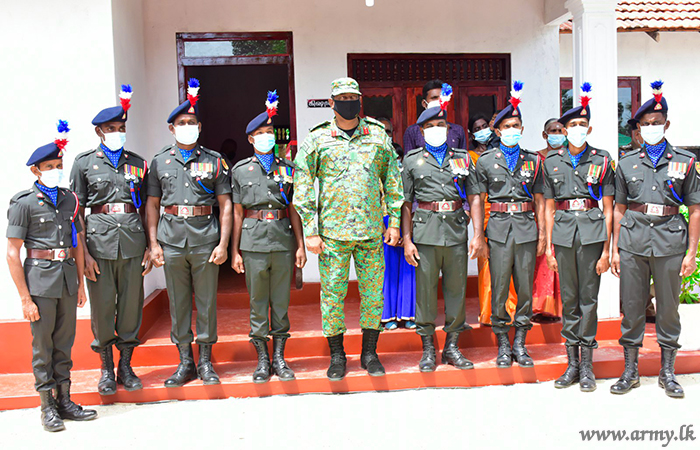