Nation Pays Tribute to War Heroes of Our Times

The National War Heroes’ Day (Ranaviru Day) ceremony that offered deep reverence to the cherished memories of valour and gallantry of tri-service War Heroes who enabled all of us to live in peace, took place this evening (18) at Battaramulla War Heroes’ Monument.

The official 7th Ranaviru Commemorative ceremony, headed by HE the President Maithripala Sirisena, Commander-in-Chief of the Armed Forces as the Chief Guest graced the ceremony, showing his deep gratitude to the memory of fallen War Heroes who salvaged the country from LTTE terrorism that spanned over 30 years.

Organized by the Ranaviru Seva Authority in close liaison with the Ministry of Defence was dignified by the presence of the Prime Minister, The Speaker of the Parliament, Field Marshal Sarath Fonseka, Secretary to the President, Secretary of Defence, State Secretary of Defence, Chief of Defence Staff, Army, Navy and Air Force Commanders, Inspector General of Police and several senior officers were at Battaramulla Parliament ground to participate in the solemn ceremony.

Wednesday’s (18) tribute at the War Heroes’ monument comprised 400 soldiers, representing tri-services, Police and Civil Security Department, collected a gathering of more than 3500 children, spouses, next of kin of 2900 fallen War Heroes out of 29932 who paid their respect by name to their beloved ones.

Since tri-service, Police and Civil Security Department defenders of the nation marked the culmination of the three-decade long brutal terrorism that plagued the country on 18 May 2009, the Government has been annually commemorating the event after declaring May as the commemorative month of the War Heroes.

President Sirisena on arrival at the venue was warmly received by Mrs Anoma Fonseka, Chairperson, Rana Viru Seva Authority (RVSA) before he was ushered to the special dais to receive the salute of the troops. A two-minute silence to honour the memory of all War Heroes who made the supreme sacrifice in defence of the motherland, was then observed. Religious observances of all denominations afterwards invoked merits on the departed ones and blessings on disabled ones.

Rhythmic beats of traditional Rana Bera, including Hevisi, Purappattu, Magul Bera, Geta Bera, etc, presented by Tri-service and Police bands then began to reverberate, symbolizing the bravery and courage, shown by departed War Heroes of the Tri services as the ceremony, reached its peak.

Mrs Anoma Fonseka, inaugurating the formal commemorative ceremony as the Chairperson, RVSA, welcomed the Chief Guest and all the invitees in a brief speech after the troops were brought to attention as the National Anthem began rending the air.

President Sirisena in his address to the Nation on the occasion recalled invaluable services of all War Heroes and underlined the importance of taking care of them as a social responsibility of all Sri Lankans.

Seconds after that, President Sirisena, Prime Minister, Speaker of the Parliament, Governor for Western Province, Field Marshal, State Minister of Defence, Secretary to the President, Secretary of Defence, Chief of Defence Staff and Service Chiefs, RSA Chairperson in succession, walked up to the cenotaph and laid floral wreaths in remembrance of all War Heroes of our times.

Next, lined up were a representative gathering of the next of kin of fallen War Heroes of the tri-services to offer their floral tributes to their beloved ones. It was a moment filled with grief, pain and loss, but the magnificent monument lit up brilliantly, appeared to have immortalized their memory for the living to see and receive veneration. They spoke in flowers and paid their respect to the memory of their beloved ones as they knelt down at the foot of the memorial

Next, sounded the Last Post honouring their memory in military formality. Trumpeters of Tri-services and the Police joined together to play the melody of fall-out. As dusk was falling, the Reveille sounded, marking the culmination of the formal ceremony which was attended by a distinguished gathering and a representative gathering of family members of War Heroes. 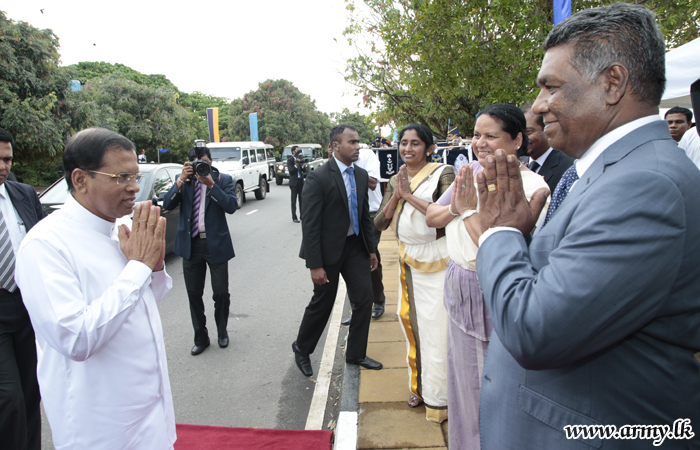 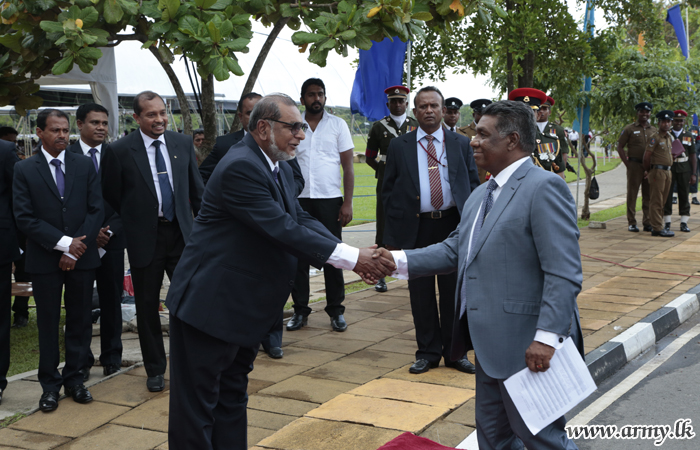 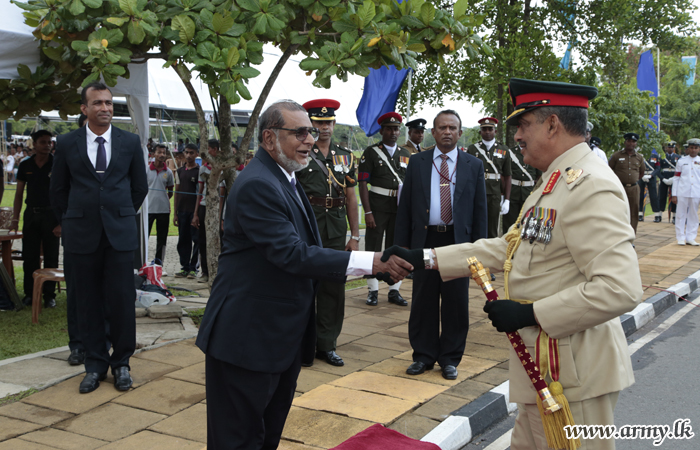 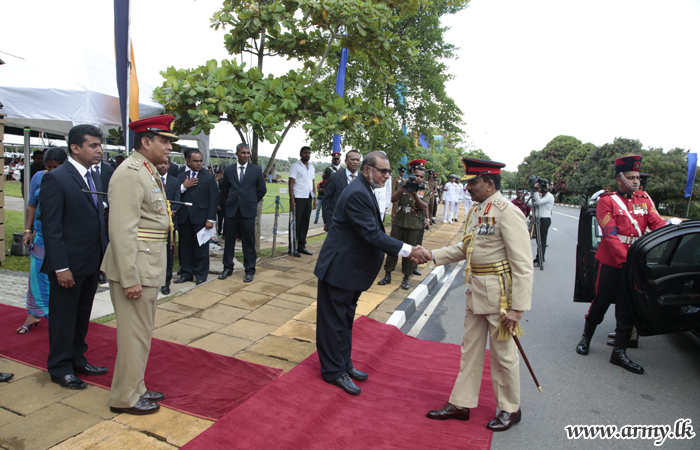 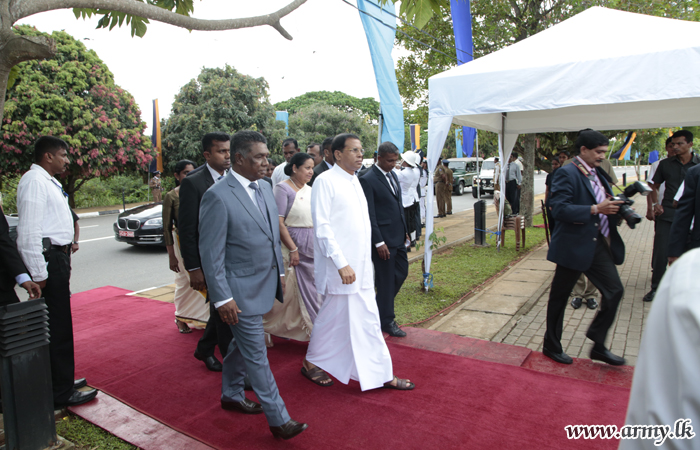 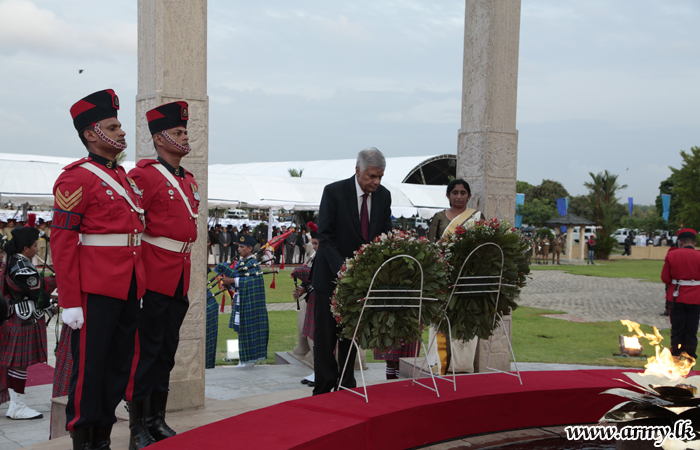 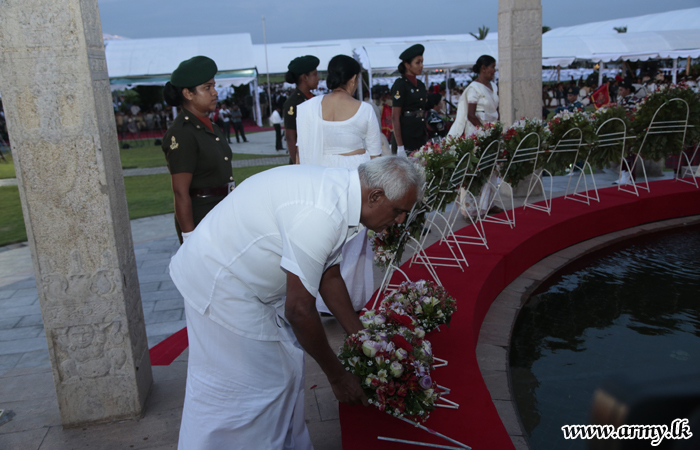 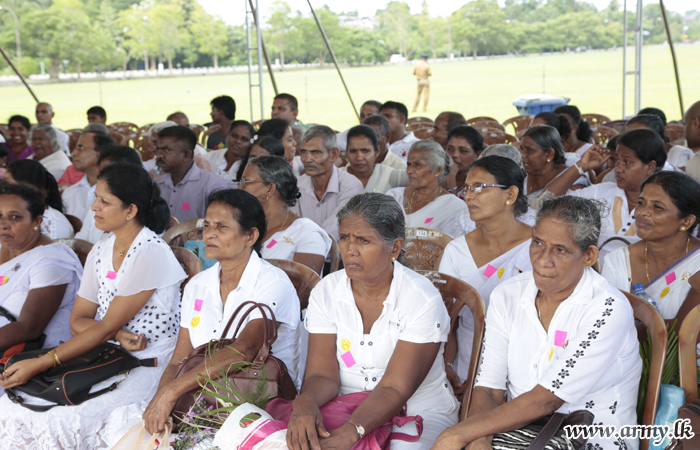 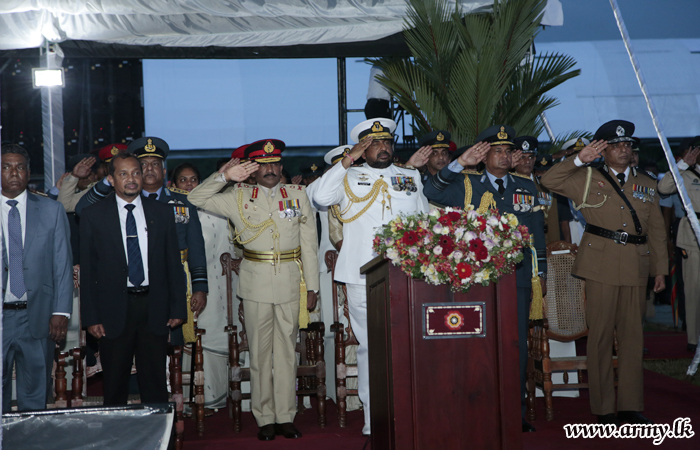 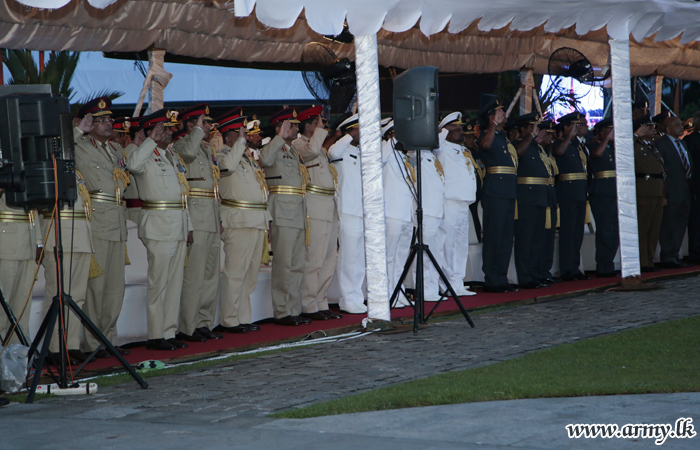