Religious ceremonies of Buddhist faith that were precursors of a series of commemorative events to occur in connection with the forthcoming Army Day (10th October) and its 56th Anniversary were inaugurated at break of Saturday (01) at Anuradhapura Jaya Sri Maha Bodhi sacred premises where 260 flags of the Sri Lanka Army were blessed.

This annual but rare spectacle that turned the upper and lower layers of the Bodhi Maluwa to a mass of colour and fragrance with the spread of thousands of multi-coloured flowers around the sacred tree was attended by members of Maha Sangha (Buddhist monks), Army Commander, Senior Army Officers as well as huge crowds of devotees and well-wishers to the occasion.

Representative gatherings of Army personnel carrying their respective flags belonging to Volunteer Forces/ Security Forces Headquarters/ Divisions/Logistic Command Headquarters/Brigades/ Area Headquarters/Army Training institutes/Regiments and Units, dressed in ceremonial uniform circled the Sri Maha Bodhi's lowest layer (welimaluwa) thrice before those flags were delivered to their Senior Officers who in turn respectfully presented them to the Commander of the Army, Lt Gen S. H. S Kottegoda. The Army flag, the National flag and the Buddhist flag were also among those flags that were taken for blessings.

Lt Gen Kottegoda in receipt of those flags from his Senior Officers placed them symbolically at the upper layer (udamaluwa) on a bed of white lotus flowers that remained scattered at the foot of the most sacred Jaya Sri Maha Bodhi tree, one of the holiest places of Buddhist worship in Sri Lanka. The stage was set for blessings.

The mellifluous religious rhythms of the Army band began to rend the air as simultaneous beating of traditional drums heralded the onset of religious observances, conducted by members of the Maha Sangha, led by Head of Atamasthanaya, Most Ven. Pallegama Srinivasabhidhana Nayake Thera, Ven. Ralepanawe Dhammajothi Thera, Incumbent, Lankaramaya and Ven. Ethawetunuweve Gnanatillake Thera, Incumbent, Mirisavetiya Chaitya. Saffronâ€“clad bhikkus present there to invoke blessings added additional colour to this annual event, much respected and cherished by all those Guardians of the Nation.

â€œSeth Pirithâ€ chanting by Maha Sangha, meant to invoke blessings on the Army followed afterwards as everybody stood in attention with clasped hands when the Commander and his entourage, including Senior Officers made floral and other offerings to this sacred tree.

Subsequent to a special oration (Anusasana) made by the Atamasthanadhipathi highlighting the importance of the occasion, merits were bestowed on fallen heroes of the Sri Lanka Army who paid the supreme sacrifice for the sake of their motherland and blessings were invoked on all Army personnel, including those differently-able soldiers.

Three other religious ceremonies of Catholic, Hindu and Islamic denominations are also expected to get under way shortly before the Army Day is marked on 10th October. 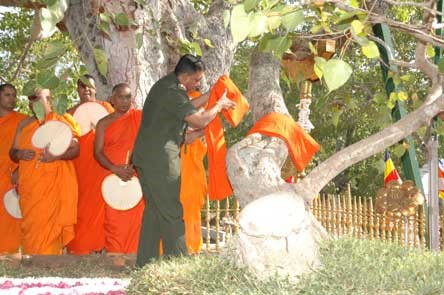