Chief of Defence Staff Vice Admiral Daya Sandagiri and Commander of the Army Lieutenant General Shantha Kottegoda were in Jaffna during the weekend in order to take stock of gravity of the tsunami disaster in the peninsula and ensure speedy remedial measures.

The visiting military chiefs were briefed on the extent of havoc in the peninsula by Commander, Security Forces Headquarters Jaffna, Major General S.D. Tennakoon after they were received at Palaly Airport and conducted to the Jaffna Commander's office.

Lieutenant General Shantha Kottegoda, who within hours after the disaster struck put his troops on full alert, visited a large chunk of affected areas in Nagarkovil under 551 Brigade and spoke to a cross section of the Army personnel serving in the area. He shared his concerns on the tragedy with his men and assured them of full support at this hour of grief. Keeping a fatherly eye on his soldiers, Lt. Gen Kottegoda personally went closer to their duty points, chatted with them and inquired into their needs, if any. Later he also went on distributing relief packets, organized by the Army Seva Vanitha Unit to the affected civilians in those areas, now looked after by troops, providing all their basic needs.

The next leg of the tour covered Manalkadu and Velvettiturai areas where Army and Naval troops are stationed to provide relief to those displaced. At the same time, the entourage took time off to meet a cross section of the displaced housed at Manalkadu Welfare Centre and freely mingled with them with a view to learning more about their grievances and needs at grass-root level. Another stock of relief parcels, provided by the Army Seva Vanitha Unit were also given away by Lt. Gen Kottegoda at this location before he spoke to troops deployed in those areas at the turn of the New Year.

Both military chiefs after witnessing damages, caused to the jetty at Kankesanthurai naval base then went on to visit the affected Army warehouse for dry-rations in the area and discussed matters related to its restoration before the entourage flew back to Colombo. 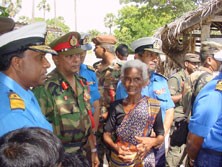 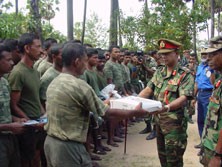 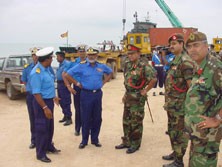 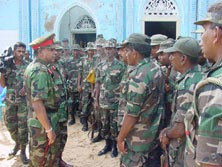 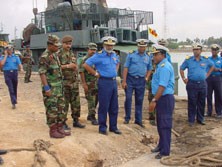 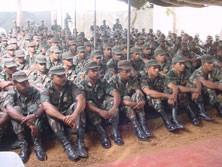 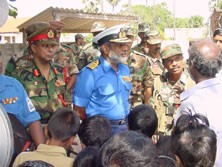 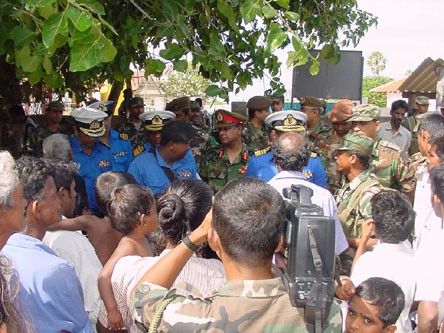