The undying memories of unfailing valour and gallantry of Army, Navy, Air Force, Police and Civil Security Department War Heroes who laid their precious lives in defence of the Motherland were recalled and venerated this afternoon on National War Heroes’ Day (19) at National War Heroes’ Monument in Battaramulla, Sri Jayawardenepura, amidst fluttering National Flags and Military Ceremonials.

The formal 11th National War Heroes’ Day Ranaviru Commemoration ceremony, headed by HE the President Gotabaya Rajapaksa, Commander-in-Chief of the Armed Forces as the Chief Guest, together with a galaxy of dignitaries, inclusive of Hon Prime Minister, Former President Maithripala Sirisena, Governor for Western Province, Admiral of the Fleet, President’s Secretary, Secretary Defence, Chief of Defence Staff and Commander of the Army, Navy & Air Force Commanders, Inspector General of Police, Chairman, Ranaviru Seva Authority and a host of close relatives of fallen ones, extended deep gratitude to the memory of 28,619 fallen War Heroes who salvaged the country from LTTE terrorism that plagued over 30 years, exactly some 11 years ago in 2009.

Organized by the Rana Viru Seva Authority (RVSA) in close liaison with the Ministry of Defence, Tuesday’s (19) state tribute was made up of tri service soldiers, Policemen and Civil Security Department personnel and collected a gathering of children, spouses, next of kin of fallen War Heroes, representative of families of all fallen War Heroes. After declaring May as the commemorative month for War Heroes, Ministry of Defence has been annually commemorating the event island-wide, although prevailing health restrictions this year restricted its full commemoration.

As the clock struck 4.30 pm, HE the President Gotabaya Rajapaksa on arrival at the venue was warmly received by Major General (retd) Nandana Senadheera, Chairman, (RVSA) before he was ushered to the special dais to receive the salute of the troops. A two-minute silence to honour the memory of all War Heroes who made the supreme sacrifice in defence of the motherland, was then observed by all joining the event. Religious observances of all major denominations, performed by monks, priests and clergy that followed afterwards as another formality invoked merits on the memory of all departed War Heroes and blessings on all disabled and serving ones.

Taking down memory lane in regal splendour of ancient times, hundreds of drummers with rhythmic beats of traditional Rana Bera, including Hevisi, Purappattu, Magul Bera, Geta Bera, etc, presented by Tri-service and Police bands then began to reverberate, symbolizing the gallantry and courage, inherited in departed War Heroes of the Tri services as the ceremony was reaching its peak.

Major General (retd) Nandana Senadheera inaugurating the formal commemorative ceremony as the Chairman, RVSA, welcomed the Chief Guest, Hon Prime Minister and all the invitees in a brief speech, having brought the troops to attention. The National Anthem at the beginning of the day’s itinerary rending the air reminded the sentiments of patriotism, next. Religious Observances of Buddhist, Catholic, Hindu and Islamic faiths followed with brief orations (Anushasana). Most Ven Divulkumbure Wimaladhamma Anu Nayake Thero was also among religious dignitaries present at the location.

The dignified ceremony then opened the floor for much-awaited HE the President’s oration to the occasion. (See his Address in Highlights).

President Gotabaya Rajapaksa, himself a well-respected military soldier, who was one of the main driving forces behind the successful restoration of peace upon culmination of brutal LTTE terrorism while he was serving as Secretary Defence before May 2009 in his address to the Nation on the occasion recalled invaluable and dedicated services of all War Heroes and underlined the importance of taking care of them as a social responsibility of all Sri Lankans.

Seconds after that, President, Prime Minister, Governor for Western Province, Admiral of the Fleet, President’s Secretary, Secretary Defence, Chief of Defence Staff and Commander of the Army, Navy & Air Force Commanders, Inspector General of Police and Chairman, Ranaviru Seva Authority in succession, inched their way to the monument to lay floral wreaths.

Next, lined up was a representative gathering of the next of kin of fallen War Heroes of the tri-services to offer their floral tributes to the memory of their beloved ones, including Mrs Laly Kobbekaduwa. It was a moment filled with grief, pain and loss, but the magnificent monument lit up brilliantly, appeared to have immortalized their memory for the living to see and receive veneration. They spoke in flowers and paid their respect to the memory of their beloved ones as they knelt down weeping at the foot of the memorial. Aerial drop of flowers by Air Force on the Monument around the same time added further significance and colour to the occasion.

Next, sounded the Last Post honouring their memory in military formality. Trumpeters of Tri-services and the Police joined to play the melody of fall-out. As dusk was falling, the Reveille sounded, marking the culmination of the formal ceremony, which was attended by a distinguished gathering giving due recognition to the mammoth national event.

Annually, War Heroes’ month is commemorated with elaborate milestone projects, such as issue of Ranaviru (War Hero) Flag, issue of commemorative stamp, provincial commemorative events and mega religious ceremonies, offer of incentives, scholarships to children of War Heroes, provision of housing facilities, etc on the instructions of the incumbent Commander of the Army.

Here follows the message of HE the President: 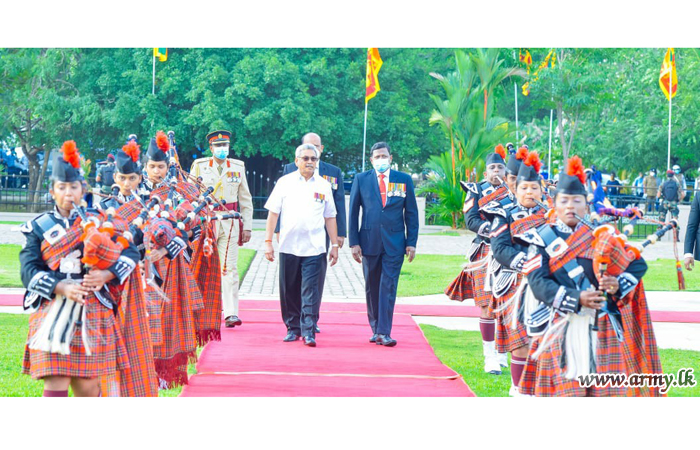 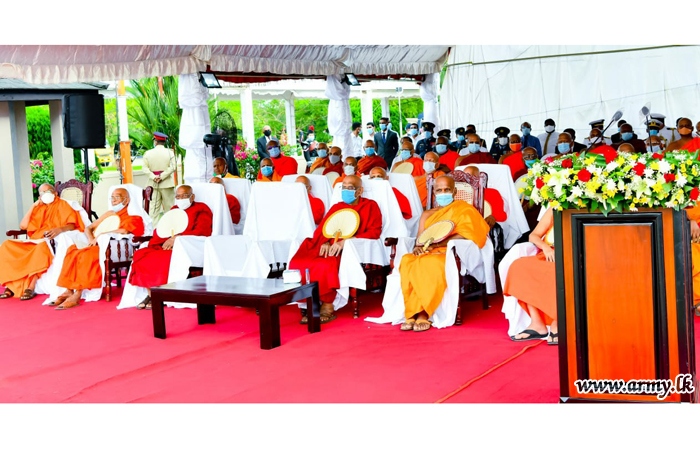 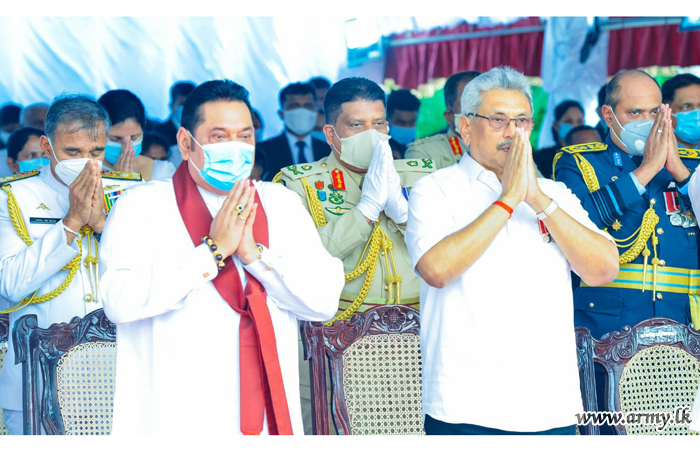 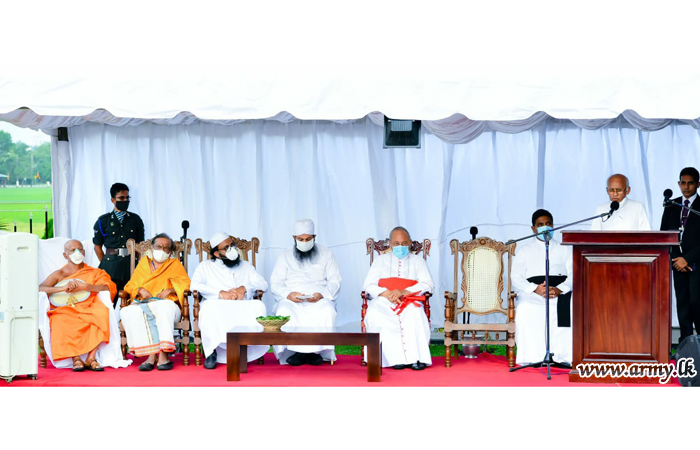 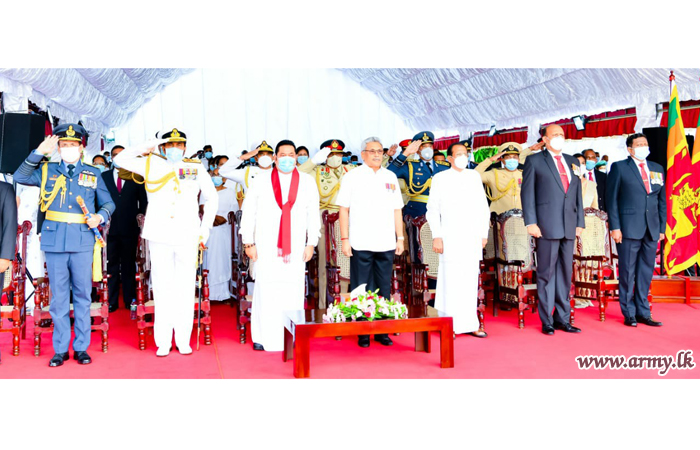 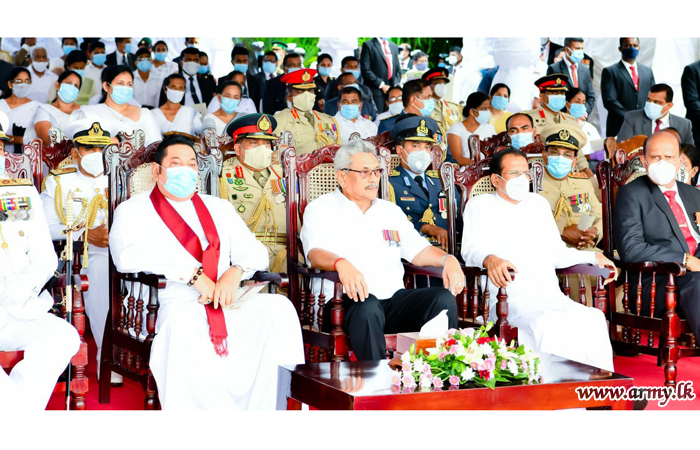 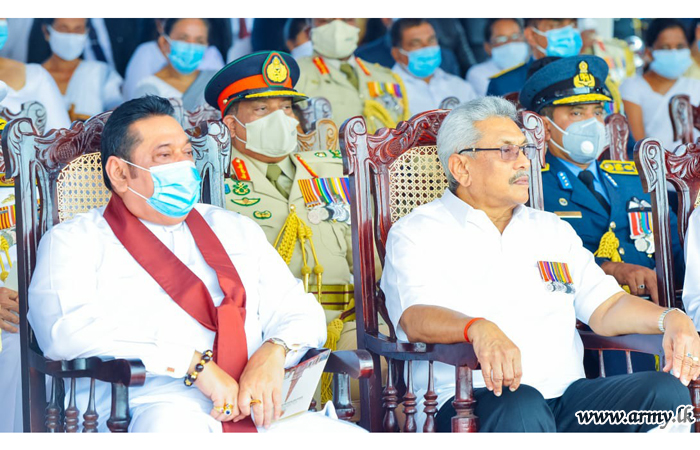 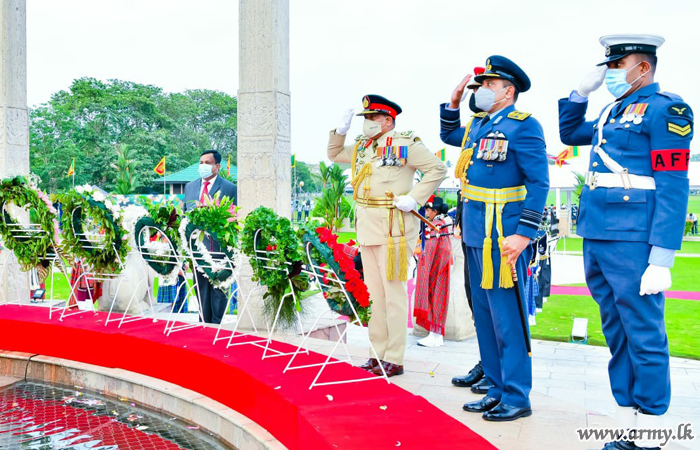