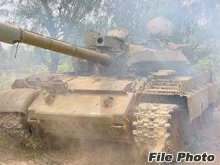 MULLAITTIVU: AN armoured tank used by Tigers during their last phase of the gun battle against the troops was completely destroyed Sunday (29) morning by brave soldiers, now entering the last patch of Tiger stronghold in PUTHUKKUDIYIRUPPU.

It is believed several Tigers on the tank also perished during the fire directed by the troops crawling on to the area. Charred dead terrorists were also found trapped inside the armoured tank, ground troops said.