The spectacular and enchanting display of Drills and Band Playing by brave men and women of the Sri Lanka Army, for the first time of its history on Wednesday (18) at Army Headquarters ground, was undoubtedly an unprecedented success of esprit de corps, demonstrated through their unfailing dedication and commitment. More importantly, this novel experience by brave soldiers of the Sri Lanka Army had not only inculcated new dimensions to their bravery in peacetime, but also opened up new vistas of drills and sports for them.

The prevailing peaceful atmosphere in the country has enormously enabled the successful conduct of this Inter-Regiment Drill & Band Competition 2002 because participating soldiers, most of who were from operational areas, had to undergo intensive training in Drills well over six months, in preparation for Wednesday's big event.

At dusk on Wednesday, three hundred and twenty five Army soldiers in full regalia, belonging to five Regiments of the Sri Lanka Army, assembled at Army Headquarters ground and proudly showed their prowess in Drills and Band Playing to a packed audience of former Commanders of the Army, foreign Defence Attaches, Senior Army, Navy, Air Force Officers and a host of other distinguished guests.

Commander of the Army Lt. Gen. L. P Balagalle RWP RSP VSV USP ndc IG as Chief Guest graced the occasion. A bevy of media men and photographers were seen scrambling for the best sight for their lenses as drums began to strike. Elegant and elated women soldiers attached to the Sri Lanka Women's Corps added colour to the spectacle and made their exciting contribution adorning the occasion. Their display without words of command certainly impressed upon the enthusiastic gathering who witnessed the two-hour long programme.

The two winning squads, at display's opening presented a symbolic Change Over of Guards similar to that of at Buckingham Palace and went ahead with a number of drill performances. Neatly clad men from National Guards and Sri Lanka Engineers certainly grabbed the attention of all those present, particularly when they were marching while patriotic melodies rent the air amidst fluttering regimental flags.

The precursor to Wednesday's Drill Competition was held earlier in August this year at Diyatalawa and Panagoda with the participation of an estimated 1071 soldiers including 17 Officers, drawn from seventeen Regiments of the Sri Lanka Army.

Commander of the Army Lt. Gen. Balagalle after awarding trophies and certificates to the winners, in a brief address to the participants spoke high of his men's talents and dedication and stressed the need to further improve standards and quality by attracting more and more soldiers for displays of this nature. Soldiers, he said, would have more time for displays and other activities in view of the peaceful atmosphere that prevails in the country.

The pennant that symbolized the overall championship in Drill and Band display was symbolically handed over to Deputy Chief of Staff Major Gen. A.E.D Wijendra RSP USP ndc psc who is also the Colonel of the Regiment, Sri Lanka Army Engineers.

Brigadier K. S Fernando RWP RSP USP Ldmc, Director Personnel Administration raised the vote of thanks before the drill display was brought to culmination upon the sounding of the Last Post, playing of the Army song and the national anthem. 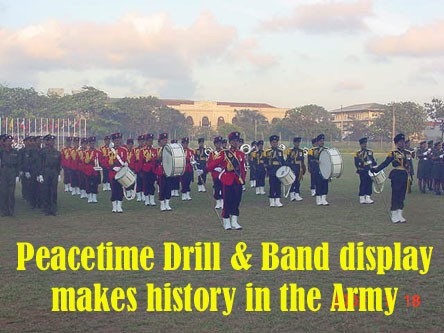 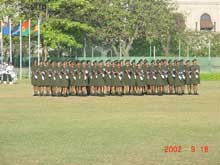 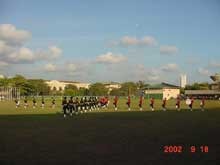 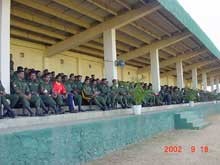 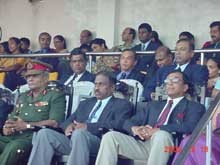 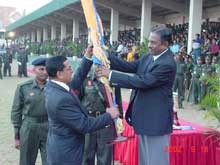 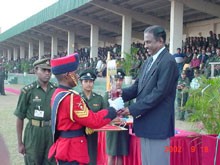 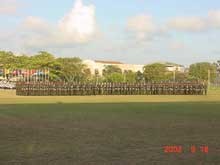