General Manoj Mukund Naravane, PVSM, AVSM, SM, VSM, ADC, Chief of the Army Staff of the Indian Army, together with his host, General Shavendra Silva, Chief of Defence Staff and Commander of the Army just minutes after the formal meeting at the Commander’s office ended, had a brief interaction with media personnel who had shown up at the Army Headquarters to cover the event this morning (13).

“I am grateful to the government of Sri Lanka and the people of Sri Lanka and General Shavendra Silva for hosting a grand reception and hospitality accorded to me and my delegation. This is my first visit to Sri Lanka in my present capacity and I have witnessed strengthening relationships between the two militaries since my days as a junior leader as part of the IPKF.

My visit also coincides with the ongoing India - Sri Lanka joint bilateral military Exercise ‘Mithra Shakti’ which has been the largest Exercise being undertaken between us. I shall be witnessing the culmination phase of the Exercise with General Shavendra Silva. This Exercise forms a major part of growing relations between both countries.

As matured democracies, the quality and interaction of elected leaders of both countries is mirrored by similar interactions between our two militaries. We have had a number of Sri Lankan senior military delegations, engaged in ‘Army to Army’ staff talks on a number of occasions.

It is a pleasure and a proud privilege to host a number of Sri Lankan Officers, Senior NCOs and Cadets for training opportunities in our military establishments. General Shavendra Silva himself is a proud alumni of the NDC in New Delhi. I am sure he carries fond memories during his stay. Even during COVID-19 outbreak, we were in touch with each other. We acknowledge the great and commendable work and the role played by General Shavendra Silva as Head of the Covid-19 control center for management for the outbreak.

In the next few days I am looking forward to interactions with senior military officers as well as civil leaders including the Honourable President and the Prime Minister. 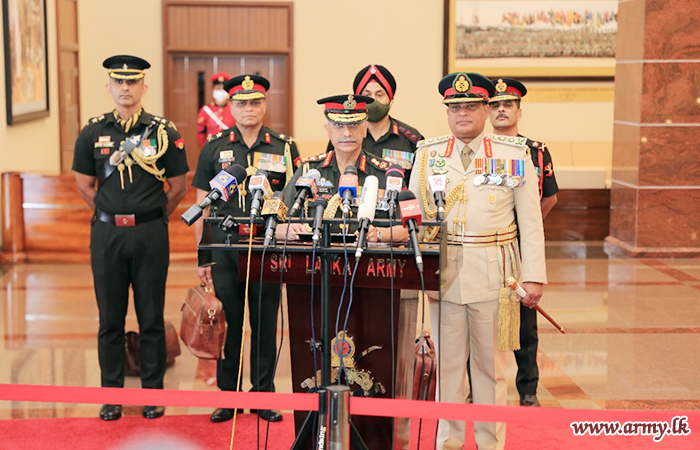