A project to repair and reclaim the road stretch that leads to Sri Pada from Keerthi Sri Rajasinghe Viharaya at Pallebeddara was inaugurated on Friday (24) under the auspices of Defence Minister Thilak Marapana and Commander of the Army Lt. Gen. L. P Balagalle RWP RSP VSV USP ndc IG amidst a vast gathering of buddhist monks, soldiers and members of the general public.

The proposed reclamation to the eight-km stretch of road from Palabaddara Central College to Sri Pada, is to be carried out with necessary repairs by Gemunu Watch soldiers of the Army within a span of eight months with the help of Army Engineers. The road facilitates pilgrims who trek to Sri Pada via Ratnapura and draws thousands of pilgrims during the holy season each year.

Sri Pada, one of the holiest Buddhist shrines in Sri Lanka received this identity after Lord Buddha left his footprint atop this mountain, situated among the serene central hills of Sri Lanka.

The inaugural ceremony commenced after laying a foundation stone by Minister Thilak Marapana at the auspicious hour amidst chanting of members of the Maha Sangha. A number of invitees including senior Army officers, local politicians, state officials and the general public graced the brief but solemn ceremony. A plaque to mark the occasion was also unveiled by Defence Minister Thilak Marapana.

In his brief address to the gathering, Army Commander Lt. Gen. Balagalle, who participated in the ceremony as Chief Guest, highlighted the importance of the participation of Army personnel in a development project such as this at a time when peace prevails in the country. The contribution that the Army make towards achieving this goal, he said, is enormous and commendable.

\'The Army\'s bounden duty is to implement and carry out all measures needed for national security while simultaneously contributing its might towards achieving the development goal of the motherland at a time when peace component in the country is gaining momentum. In its efforts towards this goal, it is needless to say that our soldiers would set an example by working in an exemplary manner,\' the Commander said.

Defence Minister Thilak Marapana and several others addressed the gathering. Major General K. B. Egodawele RWP RSP USP, Colonel of the Regiment, Gemunu Watch was also associated with the occasion.

\'We are wholeheartedly dedicated to restoration of peace and it is encouraging to note that the peace process, commenced an year ago is still holding in a satisfactory manner. Our wish is also to see that this process brings desired results at the end. Likewise, in case of any collapse of this process, we should also not be hesitant to defeat terrorism at military level,\' Lt. Gen. Balagalle noted.

Army Commander paying a tribute to the Army for its continued cooperation to sustain the Memorandum of Understanding between the government and LTTE, further added that, though there exists a shortage of funds in the Army to carry out projects of this nature, the half-day proceeds from the salary of each soldier in the Army, accommodated this worthy project too in addition to Army's contribution made towards the Sri Dalada Maligawa and Jaya Sri Maha Bodhi. 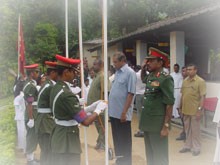 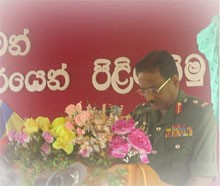 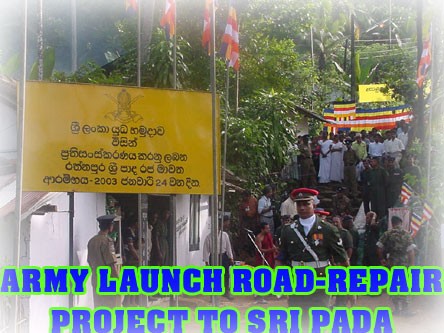