14th October of every year brings a strong sense of fond belongingness to the family of ‘Keterians’, serving in every corner of the island since it is the red letter day of the Gajaba Regiment aka the memorable Regimental Day. Indeed, the Regimental Day in all 25 Regiments of the Army brings refreshing memories and connectivity with one another as one family serving the mammoth military establishment, dedicated to the defence of the country.

For Gajaba Regiment troops who saw their birth exactly 38 years ago on a day like today (14), it is an anniversary milestone that takes them down the memory lane purely because of their unparalleled sacrifices, victories and gains which are now widely recognized by everyone both here and abroad. After amalgamation of the 1 Rajarata Rifles Battalion and the 1 Vijayabahu Infantry Regiment together, late Major General Vijaya Wimalaratne with a visionary approach founded the Gajaba Regiment on 14th October 1983 when the Sri Lanka Army was in desperate need of a new wing, driven by ferocious infantrymen who could take on the enemy fearlessly as separatist elements were intensifying their violent and savage attacks on civil and military targets. The first Commanding Officer, Lieutenant Colonel Vijaya Wimalaratne giving leadership consolidated the founding of the Regiment with the motto, ‘Unity is Strength’ and the name Gajaba itself was chosen as a tribute to the king ‘Gajaba’ since the king was famed for his physical strength, identical to that of a tusker and his unique warfare skills. However, selection of a spacious location for its HQ establishment remained a long-felt need.

As 1 GR troops were taking firm roots, it was the young officer, Major Gotabaya Rajapaksa in his capacity as the 2nd In Command of the 1 GR who took the initiative and selected the Saliyapura location to establish its HQ. By then, 1 GR troops were serving Jaffna and Kilinochchi areas but it was the 1 GR as a sole Battalion who stayed back in the peninsula.

The Gajaba Regiment joins history not only because of its unmatched warfare skills but also it was the only Regiment that gifted a President to the motherland, two Defence Secretaries and a Chief of Defence Staff cum a Commander of the Army. HE the President Gotabaya Rajapaksa’s distinguished presence on the Army Day (October 10) at Saliyapura, together with General Kamal Gunaratne (Rtd), Secretary Defence and General Shavendra Silva, Chief of Defence Staff and Commander of the Army, all three veterans in the GR amply demonstrated the high degree of importance HE the President, attached to its former fort which transformed him to be a disciplined and visionary gentleman.

Gajaba Regiment which has actively contributed to many a military operation since its birth until the culmination of the humanitarian operations in May 2009 has selflessly sacrificed for the defence of the country. 175 heroic Officers and 4075 brave Other Ranks of the GR in order to make a better tomorrow for us have made the supreme sacrifice while 180 Officers and 4030 Other Ranks sustained permanent injuries.

Military operations against terrorists at Kokilai (1985), Trincomalee, Kilinochchi, Vavuniya, Omanthai, Puliyankulam, Kanagarayankulam, Mankulam and several other northern areas remain outstanding and the public have a high regard for the Gajaba Regiment.

Of them, the Vadamarachchi (1987) operation remains an unforgettable milestone in the annals of GR history since both 1 GR and 3 GR Battalions took the lead under the command of Colonel Vijaya Wimalaratne who was the Commanding Officer of the 1 GR at that time while the incumbent President Gotabaya Rajapaksa was the 2nd In Command of the same 1 GR Battalion.

Launching the offensive operation, ‘Thrivida Balaya’ in June 1990 with the determination of rescuing 6 Sri Lanka Sinha Regiment troops under siege inside the Jaffna Fort, combined troops of the 1 GR, 4 GR and 6 GR in a striking and surprise attack destroyed terrorists and rescued the troops. For that operation too, Lieutenant Colonel Gotabaya Rajapaksa as the Commanding Officer of the 1 GR effectively contributed. Similarly, the ‘Jayasikuru’ and ‘Riviresa’ operations that cleared terrorists from Jaffna town and from its suburbs in March 1997 enabled GR troops to increase the morale of the GR troops and others in the Army It is also noteworthy the contribution of GR troops in ‘Akunu Pahara’, ‘Sath Jaya’, ‘Riviresa’ military operations that caused humiliating defeats to the enemy before May 2009.

With the untimely loss of the Founding Father of the GR, Brigadier Vijaya Wimalaratne who was by then the General Officer Commanding of the 21 Division in Jaffna, along with the military veteran Lieutenant General Denzil Kobbekaduwa in a terrorist landmine at Araly Point with several more Senior Officers, the Gajaba Regiment troops as time advanced were awarded Presidential and Regimental Colours by then President Mahinda Rajapaksa in Jan 2007.

In August 2019 Lieutenant General Shavendra Silva took the mantle of the Army Command and joined history as the first Commander of the Army, produced by the GR as well as the only Senior GR Officer who was coloured with the most number of gallantry medals, including Weera Wickrama Vibhushanaya, Rana Wickrama Padakkama, Rana Sura Padakkama and many more. The GR again takes pride in giving birth to the first-ever Executive President Gotabaya Rajapaksa who was a retired Colonel of the Gajaba Regiment.

Equally noteworthy is the appointment of General Kamal Gunaratne (Rtd), a war veteran who selflessly fought against terrorists as a senior Keterian in the Gajaba Family who is the incumbent Secretary Defence who also contributes to the growth of the Regiment throughout. The GR again joins history having produced two Secretaries Defence in the country in this way.

General Shavendra Silva as the incumbent Colonel of the Regiment, GR has endeavoured immensely to improve the infrastructure facilities at the Fort Gajaba at Saliyapura where its Headquarters remains, similar to a garrison of the best quality. Distinguished presence of HE the President on the Army Day as well as General Manoj Mukund Naravane, PVSM, AVSM, SM, VSM, ADC, Chief of the Army Staff of the Indian Army as the Chief Guest on the GR Regimental Day (14 October) will no doubt serve an undying tribute to the bravery and heroism of thousands and thousands of Keterians who elevated the Regiment to these heights as of today while mustering the admiration and appreciation of all Sri Lankans. May GR continue to foster and forge ahead as true sons of Sri Lanka! 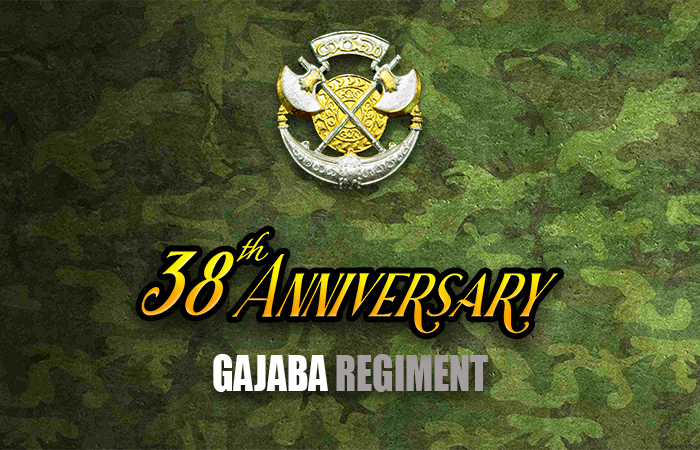