Lieutenant General Shavendra Silva, 23rd Commander of the Army during the 70th Army Day (10 October), commemorated at Galle Face Green this morning (10) coloured with a mammoth parade announced that a total of 210 Officers and 7000 Other Ranks for the first time of the Army history were granted promotions and confirmation of their ranks to coincide with the landmark event.

Here follows the full text of his speech;

On this dignified occasion, let me mention briefly the proud history of the Sri Lanka Army. It is with great respect, I remember here the Senior Officer, Brigadier Roderick Sinclair who was the first Commander of the Army after Sri Lanka gained independence from the British rule. The Army, in which I myself have been a proud product during its eventful life-span of 70 years, commanded by 22 respective Commanders, continues its dedicated and unswerving mission braving all challenges and take pride in addressing you as the 23rd Commander of the Army.

Giving pride of place for multi religious observances, we ceremonially commemorated this 70th anniversary, for which I owe a special word of thanks and appreciation at this occasion to all those who toiled for its success.

In the same way, HE Maithripala Sirisena, President and Commander-in-Chief of the Armed Forces who through his visionary leadership provides guidance for the forward-march of the Army, Hon Ruwan Wijewardena, State Minister of Defence and Secretary Defence, General (Retd) Shantha Kottegoda are remembered with respect at this milestone 70th Army Day commemoration.

I feel it a special privilege for me to be able to take part in this colourful parade for the first time as the 23rd Commander of the Army on the commemoration of the 70th anniversary of the Sri Lanka Army. I also pay my sincere thankfulness to all those who presented today’s colourful parade with high physical standards including the Parade Commander and also to both Adjutant General and the Director Personnel Administration of the Army and their staff for the meticulous arrangements in place.

Sri Lanka Army in the past 70 years as the Defender of the Nation in the face of numerous challenges and threats, posed against the country, her people, her sovereignty and territorial integrity fulfilled an arduous role and is still performing an immense task for protection of human lives.

Accordingly, I have also proposed seven concepts that could contribute to realization and empowerment of those objectives. Namely, National Security, Contribution to Nation-Building and Reconciliation, Enhancement of skills and educative programmes of Army personnel, Promotion of professional conduct of all ranks, Provision of vocational training for potential retirees during pre-retirement period, Enhancement of Welfare facilities for Officers and Other Ranks, and Modernization of the Army to meet with current challenges are among those concepts. I believe the guidance, leadership and incentives, being given based on those concepts would contribute to work as a team to produce effective results.

Moreover, my special attention has been focused on the promotion of the Army’s forward-march by taking necessary policy decisions with a view to raising the qualitative aspect of the Army. On the other hand, improvement of welfare facilities as well as provision of all needs for effective performance of duties would help everyone to perform their roles with contentment, as I believe.

We must unfailingly be dedicated to safeguard the security of the country since it is the prioritized role of any army. Through that, space could be created for dawn of a social surrounding, devoid of suspicion or fear. By making the soldier a full-fledged one through training and improvement of skills and knowledge, any unexpected threat as a country could be effectively countered. For that all of us must be well-prepared.

The pioneering service rendered by Army personnel at the expense of their lives without any hesitation has contributed largely to the prevailing sustainable peace and reconciliation in the country. In the same manner, it is worth noting that the Army has immensely assisted to restore normalcy in the event of national disasters, emergencies and natural catastrophes, etc. Similarly, the Army at present is spearheading a pioneering role in the sphere of national development in our developing nation.

Continued training, advanced preparedness, model exercises, etc would always provide necessary guidelines to meet with any emergency without resorting to panic. For that as proud members of the Army, you must always be alert and continue to improve your conduct while working as a team of exemplary, hard-working and disciplined Army.

I take this historic opportunity to pay my tribute to serving members for their commitment, dedication and enthusiasm which always go beyond the call of duty since the founding of the Army seven decades ago. Past Commanders who provided leadership to the Sri Lanka Army in the past 70 years, Senior Officers, Regimental Sergeant Majors, senior and junior Non-commissioned Officers and members of the civil staff who contributed largely to the proud Army history of 70 years are gratefully remembered along with members of their families.

Not only that, the responsibility of protecting and taking the spirits of freedom we won ten years ago to the future generation lies with us as members of the Army. Being always prepared to perform any challenging task for defence of the country and her people in future too, the Army has re-endorsed that it is their most prioritized responsibility.

It is a well-known fact that as at present all Sri Lankans are living in a very peaceful atmosphere with bonds of brotherhood and reconciliation. The responsibility for protection of future security and the country’s territorial integrity lies with Army personnel who are now serving as the one combined largest composition of all ethnic groups, dedicated to defence of the country. It is a responsibility that befalls us today and tomorrow.

As at present, the Army unlike before is very much interacting with members of the civil society in a big way. Through the ‘Vapi Sangramaya’, the Army has undertaken to renovate and restore abandoned or dilapidated tanks for recultivation programmes while equally contributing to the question of global warmth via the ‘Thuruliya Wenuwen Api’, ‘Thuru Sirasa’ reforestation and sapling planting projects for the benefit of the next generation. These are only a couple of examples.

Therefore, it is opportune for the Army to carry forward this civil bonds of goodwill in order to further promote those relations and the confidence the civilians have placed in us.

As the Commander of the Army, it is my duty to dedicate to uplift welfare of all disabled War Heroes and family members of fallen War Heroes by further improving their life standards. I must state here that I will do my best in that direction by organizing everything possible. At this moment, I recall the memories of all those who sacrificed their lives for the sake of the motherland’s sustainable peace and reconciliation, including Officers, Other Ranks and members of the civil staff. I wish them attain bliss of ‘Nirvana’ at this moment of importance.

I will also ensure all requirements needed to guarantee your profession in the future and its sustenance are provided to you as members of a dignified and proud organization. That would enable all those Army personnel to sustain a sound mental disposition while further raising their capacity for performance of duties, according to my belief.

Similarly, I take this opportunity to wish all those Army members still under recuperation having sustained injuries during the operations speedy recovery. I also wish all serving members of the Army as well as the civil staff who are doing an invaluable service to the organization through different fields and also their family members be well and happy.

At this proud juncture of 70 years of victorious commemoration, all Officers and All Ranks should resolve to sustain the dignified essence of the Army in future too as the ‘Defender of the Country and Her Citizens’. I wish all of you be blessed with all strength, courage and fortune for that mission in future too. I wish all of you a healthy future, filled with joy and peace ! 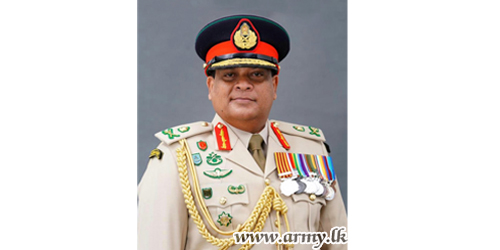