The Air Mobile Brigade under the 53 Division as a Commander’s Reserve contributed immensely to wipe out LTTE terrorism during the humanitarian operations as a special strike force, and this Brigade with two more recently reinforced Brigades on my initiative is currently deployed for special security operations and emergency disaster management duties in the North and East of the country while simultaneously enhancing its striking capacity and strength, so said General Shavendra Silva, Chief of Defence Staff and Commander of the Army.

During an address to the newly-qualified 4 Officers and 196 Other Ranks who completed the Air Mobile Course No. 23 at the Air Mobile Training School (AMTS) this morning (28) at Nikawewa, General Shavendra Silva as the Chief Guest for the Passing Out ceremony commented that he was able to command the Air Mobile Brigade when it was deployed in Muhamalai, Eluthumadduwal areas at a time the operations against LTTE terrorists were at their peak. “In August in the year 2006 when LTTE terrorists overran the Entry/Exit point at Muhamalai on the A9 road, I was privileged to serve as the Brigade Commander of this special Brigade amid fierce fighting, which I recall as a milestone in my military career. Well over one year, the bravery and determined and committed sacrifices, made by those Air Mobile soldiers inflicting heavy losses to the enemy after infiltrating terrorists’ forward defence lines fearlessly, remain monumentally significant and serve a tribute to their gallantry,” he said.

Tracing its roots, General Shavendra Silva said the Air Mobile Brigade was first raised in 1994 with four Brigades under the 53 Division in order to further strengthen striking capabilities of the Army in view of operational requirements that prevailed in Thoppigala, Trincomalee, Valachchenai, Mannar areas at that time. Having made it to be a full-fledged Air Mobile Brigade that could be rapidly mobilized afterwards, those troops actively contributed to the ‘Riviresa’ and ‘Jayasikuru’ operations, securing sound gains over the enemy.

“Your all-time readiness to face any security challenge or disaster as pioneering defenders of the nation’s security should be based on continuous training which should be your No 1 priority as a reserve force. Although our priorities had to be changed in an unprecedented manner due to COVID-19 virus in the country, I am pleased to see that you all uninterruptedly continued your training sessions amid challenges and performed your responsibilities to the best of your ability which is truly commendable,” the day’s Chief Guest remarked.

Appealing those soldiers to be prepared to face any challenge, either in the Army or at the personal front with self-confidence, the Commander of the Army added that Air Mobile Brigade troops, identical to the exceptional skills of Special Forces and Commandos, possess exceptional skills and are expected to master in all strategic training modules you underwent, such as anti-terrorist tactics, urban warfare, defensive martial arts, operations with aircraft, rappelling techniques, warfare strategies, special infantry operations, etc.

Inauguration of the construction of the 200 m long new firing range, new Fighting in Built-up Areas (FIBUA) model, the new administrative wing of the Air Mobile Training School (AMTS) as well as the 80ft high tower for rappelling practices which is nearing completion, would further inspire Air Mobile Brigade troops as a reserve force with special skills, the Chief Guest in his address to the gathering said extending his best wishes to those graduates in the AMTS Course No 23. 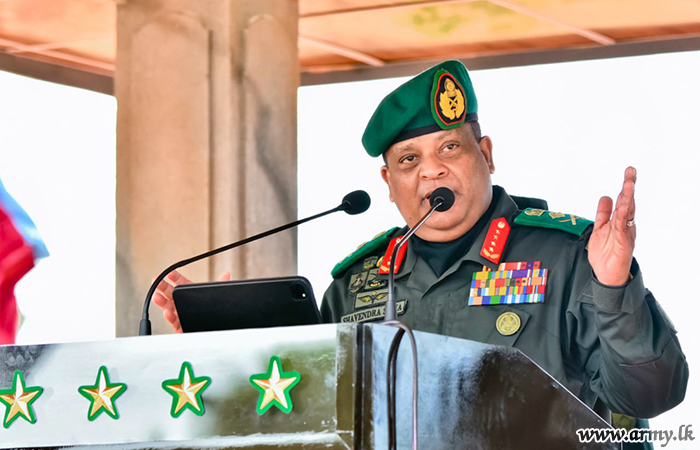