Commander of the Navy Vice Admiral Daya Sandagiri, VSV, USP rcds, MSc (DS), psc, FCMI, who takes on the mantle of the office of the Chief of Defence Staff (CDS) today (15th September 2004), is the first Naval Chief to be elevated to this key appointment in the history of the Sri Lankan Armed Forces.

Vice Admiral Daya Sandagiri as Naval Chief steered the Sri Lanka Navy admirably for almost four years and made a determined effort to transform his troops to a formidable force that could weather the challenges faced by Sri Lanka as an island- nation in the south Asian region.

To mark the day of his assumption of office, the newly-appointed CDS on arrival at the Joint Operational Headquarters (JOH) premises at Army Headquarters where the Office of the CDS is situated was accorded a ceremonial Tri-service Guard of Honour by troops of the Army, Navy and the Air Force.

The new CDS on entering his Office lit the traditional oil lamp in accordance with age-old religious rites and rituals while members of the Maha Sangha invoked blessings on the new appointment and chanted Seth Pirith after floral tributes were made to the Buddha statue in his new Office. Members of the clergy afterwards tied blessed threads around Vice Admiral Sandagiri's wrist and wished him good luck in his new appointment.

To signify acceptance of the office of the CDS, the new CDS symbolically placed his signature on a formal document amidst best wishes of his Senior Officers and members of the staff.

A tea party rich with traditional sweetmeats afterwards entertained all guests on the occasion before the new CDS met media men present for a briefing. He also met with journalists and responded to their queries before he left the premises.

Vice Admiral Daya Wickrama Kumara Sandagiri assumed duties as the Commander of the Navy on 1st January 2001. He is one of the most experienced salts ever to assume this high Command in the 53-year-old history of the Sri Lanka Navy.

He is also the first Naval Officer to attend the Post Graduate Studies at the world\'s prestigious Royal College of Defence Studies in the United Kingdom. He has many other firsts during his distinguished, decorative and unblemished Naval career spanning over 37 years.

His ambition to seek a career as a seafarer prompted young Sandagiri to enlist the then Royal Ceylon Navy on 14th November 1966 and was in the first batch of Naval cadets to join the renowned Naval & Maritime Academy in Trincomalee on 1st July 1969.

On 01st July 1973, he was commissioned as a Sub Lieutenant in the Executive Branch. On successful completion of his professional training in Sri Lanka, he was sent to INS Valsura in India for the Sub Lieutenant Technical Course and to INS Venduruthy in India for specialization in Gunnery in 1975.

Later, he graduated from the Defence Services Staff College in Wellington in India in 1984. Vice Admiral Sandagiri has served in almost all shore establishments of the Navy during his career. He had the honour of functioning as the Commandant of the Naval & Maritime Academy, which nurtured his Naval career to a large extent.

Also he had the distinction of serving as the Area Commander of the Northern, Eastern, Western and Southern Naval Commands.

His first assignment afloat was on board RcyNS Gajabahu, the Flagship of the Navy in 1971. As a seagoing officer he has held numerous billets aboard Naval Ships till 1989 and his sea career culminated with the appointment on board SLNS Wickrama as the Commanding Officer and Surveillance Command Squadron Commander.

Promoted to the rank of Commander on 1st January 1985, he held key staff appointments such as Regulating & Security Officer, Staff Welfare Officer, Staff Communication Officer, Staff Intelligence Officer and Deputy Director Naval Operations at Navy Headquarters. Later, he was elevated to the ranks of Captain and Commodore on 1st April 1989 and 1st March 1994 respectively.

Vice Admiral Sandagiri holds a Masters Degree in Defence Studies. He is also a fellow of the Chartered Institute of Management, United Kingdom.

As an ardent Buddhist, Admiral Sandagiri was instrumental in inculcating the religious harmony within the Navy and his contribution towards the renovation and upliftment of places of religious worship in the country is significant.

Born and bred in Veyangoda, Vice Admiral Sandagiri had his education at St. Mary's Maha Vidyalaya, Veyangoda and Kegalle Maha Vidyalaya, Kegalle where he distinguished himself in studies as well as in sports.

Vice Admiral Sandagiri married Pearl in 1974 and has a small closely-knit family of two sons.

She has been an active member of the Navy Seva Vanitha Unit and has rendered yeoman services towards the growth of the unit and well-being of its members since taking over the reins as the President.

Their sons, Yasiru is an Executive in the Banking sector and Chathura has just completed his Bachelor's Degree at the Engineering Faculty of the Moratuwa University.

Here follows the message issued by the new Chief of Defence Staff and Commander of the Navy, Vice Admiral Daya Sandagiri;

I consider it a privilege to issue a message on this historical occasion of assuming duties as the Chief of Defence Staff of the Joint Operations Headquarters on 15th September 2004.

The three Armed Forces, Sri Lanka Police and Special Task Force have won the admiration of all Sri Lankans for the yeoman services extended for two decades by bravely facing the acts of violence that cropped up in the country. Along this path we faced many challenges. On this occasion, I would like to pay my gratitude to the members of the three Armed Forces, Sri Lanka Police and the Special Task Forces for execution of their duty by the country with courage, patience and dedication and salute those who have made the Supreme Sacrifice.

Today, our prime obligation is to extend the maximum support for the continued success of the peace process, which has put the country on the path to peace. Further, it is also our responsibility to further strengthen the operational capability and preparedness required for the National Security. I firmly believe that you will extend your whole-hearted support to me towards achieving these goals.

Let's determine and unite to discharge the duties expected of the three Armed Forces, Sri Lanka Police and Special Task Force with dedication, devotion and commitment. May the blessings of the Noble Triple Gem and the protection of the Gods be with you all ! 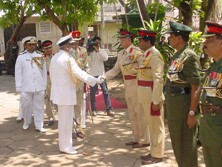 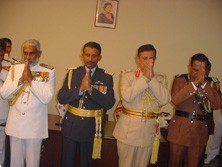 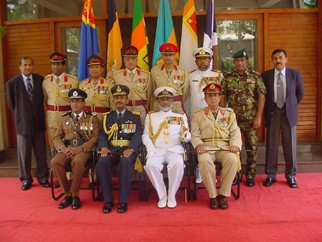 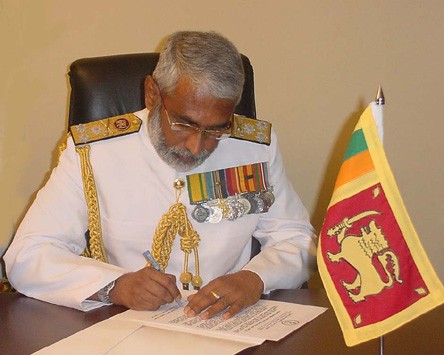 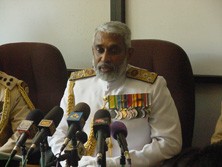