The apex of the joint three-week long Exercise 'Cormorant Strike X - 2019’ (FTX) of the Army, comprised largely of Special Forces (SF) and Commando Regiment (CR), troops and backed effectively by sailors, airmen, mechanized infantrymen and foreign troops got off the ground at Kuchchaveli, Trincomalee this afternoon (23) before the Commander of the Army, Lieutenant General Shavendra Silva and a mammoth gathering of state officials, commanders, tri-servicemen, invitees, media personnel, onlookers and local civilians.

The final phase of this annual FTX, technically defined as the ‘Critical Engagement’ vividly displayed how a simulated multi-pronged joint amphibious attack on enemy hideouts could be performed with precision and at short notice in a setting, considered hostile, most challenging and exciting. To the credit of the Sri Lanka Army, the FTX has attracted a total of 80 plus Foreign Service personnel, representing 10 countries, either as participants or observers in the Operation proper.

Along with 2400 troops, infantrymen and mechanized infantrymen, inclusive of 400 Sailors and 200 Airmen, the FTX was made up largely of Army Commandos and Special Forces. The FTX, one of the landmark exercises of the Army got to a start on 3 September and mock operations covered Trincomalee, Kandy,Victoria Dam Pulmoddai, Neejapanithankulam, Nilaveli, Ibbankatuwa Tank, Colombo, Sigiriya, Gomarankadawala, Wadumunei, BMICH Colombo 07, Mannar, Balapitiya, Madurankenikulam, Kayankerm, Iluppaikadawai, Narakamulla, Nuwaraeliya and finally the Kuchchaveli beach front.

Today’s highlight, the mock attack on the enemy was watched by Chief of Defence Staff Admiral Ravindra C Wijegunaratne, Vice Admiral Piyal De Silva, Commander of the Sri Lanka Navy, Air Marshal Sumangala Dias, Commander of the Sri Lanka Air Force at the invitation of Lieutenant General Shavendra Silva, Commander of the Army who closely watched the proceedings throughout the preparatory and operational stages. Today’s simulated amphibious lightening attack of ferocious magnitude, headed by Commandos and Special Forces, where they were concurrently joined by MI 24 and MIG fighter jets and Naval fighter craft at sea struck enemy positions in a convincing manner, identical to that of a real battlefield scenario.

The FTX is aimed at enhancing the military cohesion, combat preparedness, operational readiness and efficiency of Special Operational Forces and is on par with similar Exercises at international levels.

Sharing of military competency, exercising the elites in joint nature ‘inter-operability’, experiencing of complex environments and exercise of chain of commands under simulated scenarios, development of common understanding, efficient integration among different arms, military theoretical understanding and acting as an eye-opening platform for special operations, exercising fundamentals of warfare in special Operations and the integration into advanced technology to a certain extent, etc are among major objectives behind the realization of this annual event.

Major General Laksiri Waduge, Exercise Director in his introductory remarks before the launch of the final Exercise told the gathering that it was designed to empower the experience pre-arranged to Special Operations Forces (SOF) soldier to be prepared for any security threats.

A few minutes after the FTX, a message of greetings, issued by HE the President and Commander-in-Chief of the Armed Forces Maithripala Sirisena, was read out by Lieutenant Colonel Lakmal Perera, Exercise Colonel General Staff. The message appreciated the commitment of the tri-services and their dedication for defence of the motherland.

This year’s Exercise 'Cormorant Strike X’ was made more comprehensive to suit the most modern techniques adding new features in specific operation segments. Based on a hypothetical scenario, the Exercise incorporated Web GIS software for operations, Improvised Digital Bird Tables and Smart Boards, separate joint Naval operations, joint night operations, Operations conducted by both Special Forces and Commandos in the same area and the conduct of a parachute jump with full combat gear, to highlight a few.

A panel of Exercise Directors, commanded by Major General Laksiri Waduge, Director, Exercise with the coordination of the Army Directorate of Training, headed by Major General Suraj Bangsajah, Director General Army Training, meticulously planned and executed the whole of the Exercise 'Cormorant Strike X - 2019’ in a very professional manner until the final phase.

Brigadier Sujeewa Senerath Yapa, Deputy Exercise Director, Brigadier K.A Samarasiri, Commando Brigade Commander and Colonel J.P.C Peiris, Commander, Special Force Brigade, have been serving in the Exercise since the Day 1 of the FTX and contributed immensely to the success of it.

The first phase of the Exercise 'Cormorant Strike IX - 2019’, started off from Minneriya on 3 September after a brief inaugural ceremony.

The Exercise at its final stages joined directly with Army troops for onslaughts against enemy strongholds and raised the momentum. This Army-initiated mock Field Training Exercise (FTX), organized and implemented in close cooperation with the Sri Lanka Navy and Air Force has been designed for deployment of their troops in a war milieu of Special Operations at any given moment. Troops jointly planned to engage in combined operations as one team, using manoeuverist approach, encompassing core function of Find, Fix, Destroy while planning, execution and mission command which can be made operational at any given scenario.

The near three-week long Exercise, covered Eastern, Central, Western and North Central Provinces and provided a catalyst to build the capacity of Special Operations Forces (SOF) of the Army, comprised of parallel seaborne and airborne operations, special combat readiness operations and direct onslaughts against the mock enemy strongholds, conduct of joint operations, execution and planning of special operations, tactics, techniques and procedures, etc within given time frameworks during the specified period.

A few foreign members of the Diplomatic Corps also watched the mock Exercise where the combined troops of the Special Forces showed their skills and carried out a ferocious attack on another enemy camp in close proximity.

Lieutenant General Shavendra Silva during a brief interaction with visiting foreign invitees and a huge gathering of media personnel explained the distinct objective and importance behind such training of Special Forces and Commandos which are a part of any country’s pride and dignity. Witnessing the roles of Army troops and supporting troops closely, he expressed his happiness over their skills which have been organized in a mock war milieu environment. 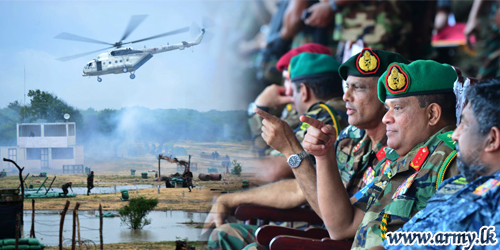 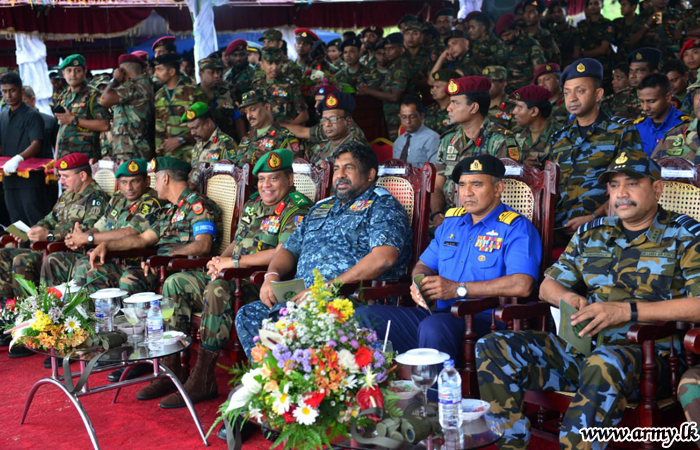 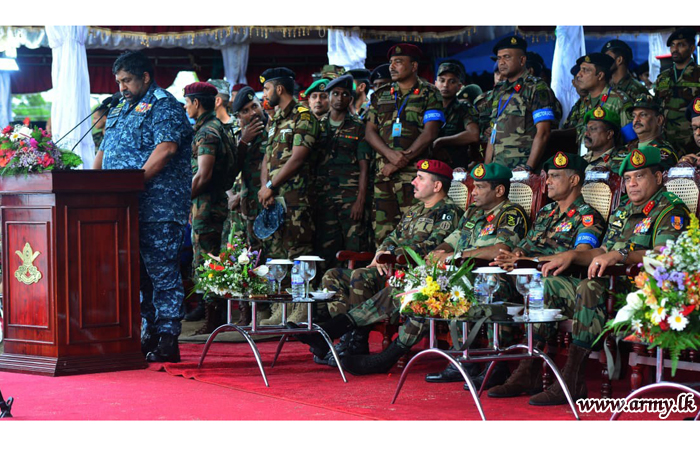 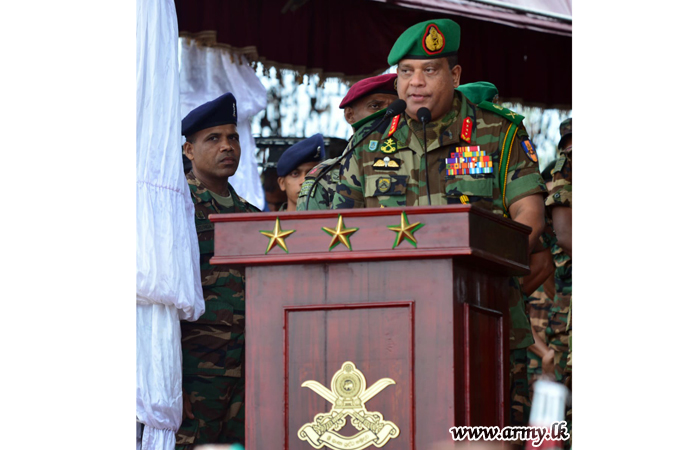 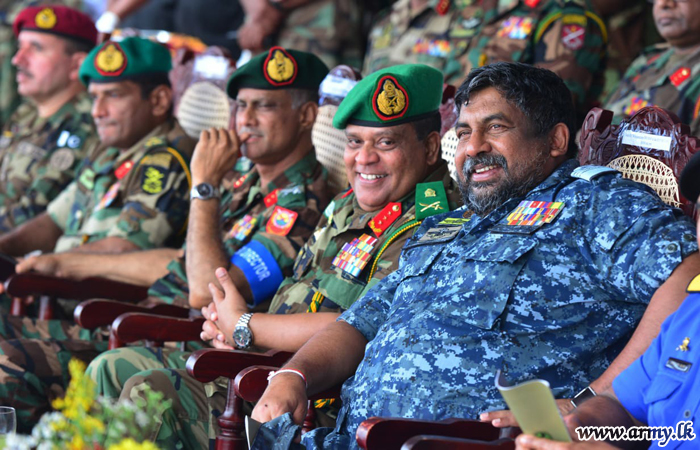 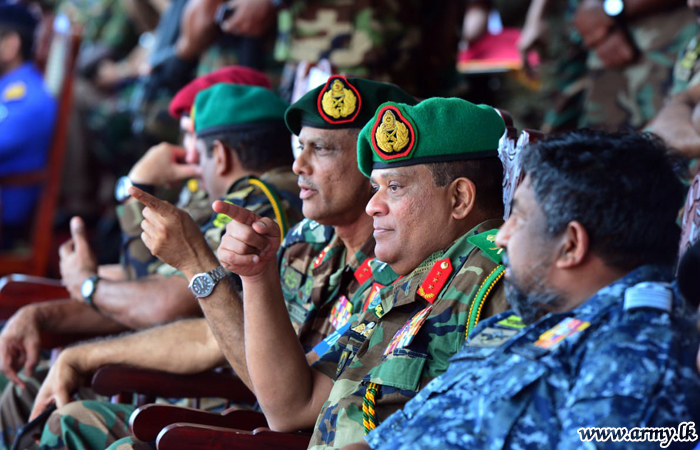 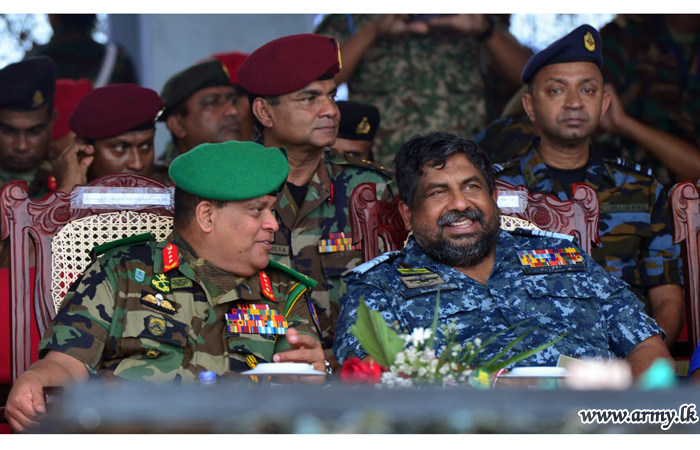 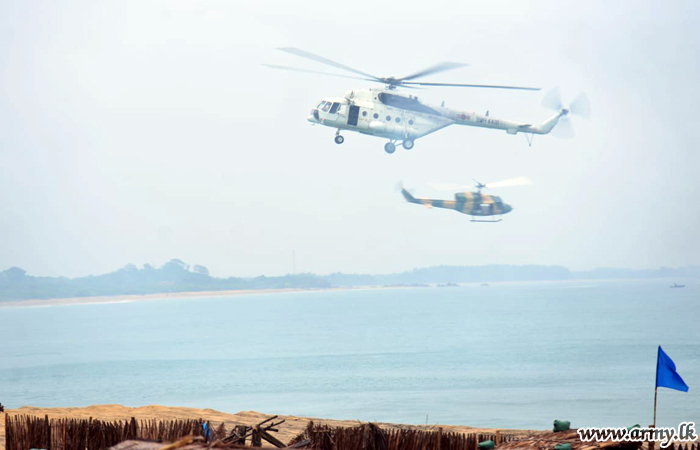 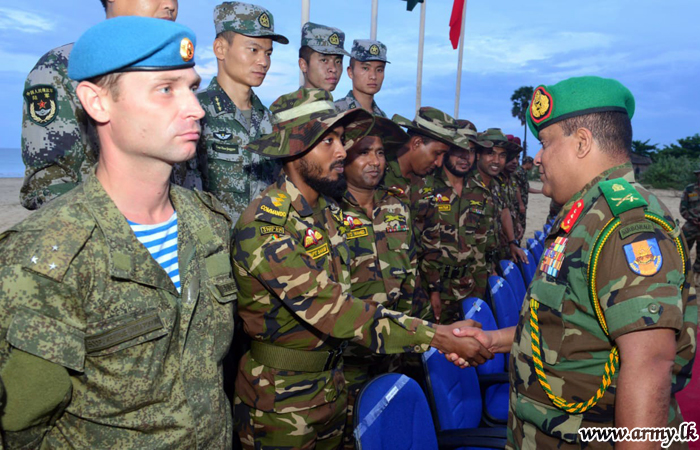