Enormous contributions made by troops hailed

Lt Gen S. H. S. Kottegoda, Commander of the Army on Thursday (14) flew to the Security Forces Headquarters, Wanni in order to see for himself how well his men get on with their duties in respective areas and what could further be done to promote their welfare interests.

His arrival at Vavuniya, which was his military domain for a bit over a year as Commander, Security Forces Headquarters, Wanni, was greeted with a Guard Turnout plus a Guard of Honour hosted by Sri Lanka Light Infantry troops at Vavuniya under the command of Major General Parami Kulathunge, the present Commander, Security Forces Headquarters, Wanni.

During his first address to troops, based in Vavuniya under Security Forces Headquarters, Wanni, the Commander underlined the importance of continued rounds of training being given for troops in all wings, attached to the Wanni Headquarters. He also maintained that the LTTE was made to come for talks due to sustained efforts and enormous contributions hitherto made by the Armed Forces and the Police.

\"Peacetime is the best time for more and more training while extending our support for peace moves. The component of discipline should be maintained at all levels and I would not hesitate to punish anybody who would not adhere to the required standards or found guilty of any offences, regardless of their rank or file,\" he asserted. Touching on his intended plans for welfare, he added that free issues belonging to Army personnel would continue after tender procedures are fulfilled. \"Moves are afoot to find houses not only for next of kin of those dead and gone War Heroes but also for those now serving. Plans are under way to get them too housing before their retirement,\" he further noted.

Major Gen Parami Kulathunge after Commander's address to the troops presented a symbolic memento to the Army Commander to signify his visit to Wanni. After meeting troops at 56 Division deployed in Kokkeliya area, he shared his views with them and went on to thank everybody for their excellent contributions, meant to sustain peaceful atmosphere in the area while a ceasefire is in effect. Troops stationed there too welcomed their military chief with a Guard Turn-out.

His visit to the entry/exit point at Omanthai, a central hub of movement of traffic bound for northwards and westwards was of major importance and the Commander freely moved about in the area talking to a section of the public. The Commander did not forget to visit the cross-loading point at Omanthai where shared views with those civilians returning towards Vavuniya. The commander made inquiries regarding transport facilities that have been made available for civilians by Security Forces who shuttle across the no man's land and instructed the authorities accordingly.

Lt. Gen Kottegoda in the company of his Senior Officers then visited the 214 Brigade at Puttukkulam where he was received by Major General Gamini Hettiaarachchi, Commander, 21 Division. The visiting Commander addressed the troops at the venue and motivated them. Air Force personnel serving the area were also there to listen to the Army Commander on the occasion. Later on, he went to see several bunkers at the wayside FDL on the Vavuniya-Mannar Road and inspected how they have been made and what needed to be done as renovations. During each visit, the Commander as a veteran infantry man instructed troops at the same time and explained how they could improve construction standards of those bunkers and other constructions needed for security work.

Madhu junction cross-loading point on the Mannar-Vavuniya road was his next stop. He visited the venue and shared views with all those men on duty at the loading point before he proceeded to the Area Headquarters, Mannar.

Upon his arrival, Area Commander for Mannar, Brigadier K S. Fernando along with his Senior Officers welcomed the Commander at the Area Headquarters premises where he addressed troops underlining the importance of their contributions to the defence of the motherland. A little while later, the Commander paid his obeisance to Thirukeeshwaran kovil (temple), the most hallowed sacred and religious place in the Mannar island along with his entourage. He made offerings to the holy temple and received blessings from priests (Kurukkal) who welcomed the Commander.

After his overnight stay at Mannar, the Commander on Friday (15) morning paid visits to troops, deployed at Manthai and Vanakalai where he addressed his men and shared his views with them by way of formal addresses. The Commander inspected a line of bunkers at Manthai and instructed his Senior Officers to do the needful to renovate them. His two-day visit to Mannar ended after paying a visit to the Mantottam camp on his return to Vavuniya where he partook his lunch before his return to Colombo. 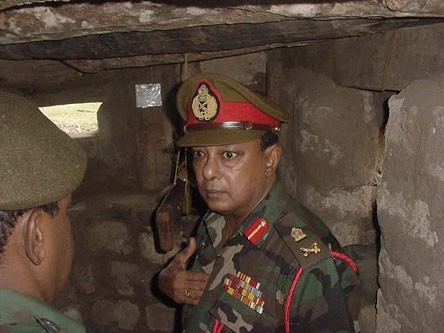 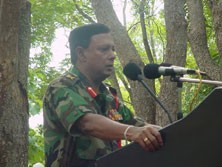 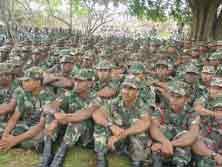 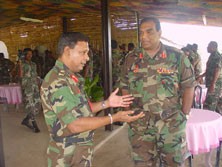 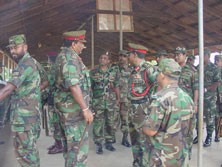 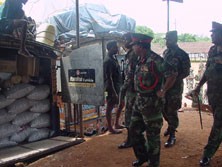 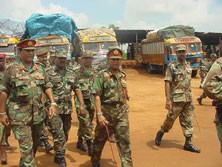 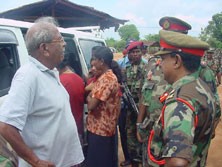 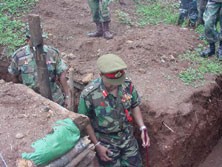 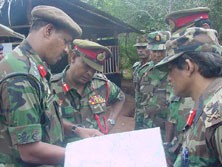 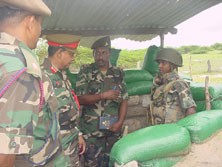 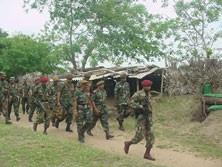 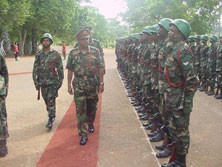 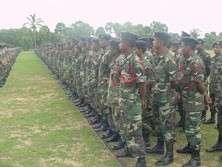