BONA FIDES of Non-Governmental Organizations (NGOs) working in the north and east are called into question once again by authorities as naval troops continue to arrest more and more stocks of arms and ammunition from Tamil Tiger (LTTE) boats that have been originally donated as tsunami aids by those NGOs to affected fishermen.

The NGO, â€œHUMEDICAâ€ of German origin, reportedly engaged in humanitarian and medical assistance work in the north for some time, is learnt to have distributed some boats among tsunami victims several months ago after many fishermen were badly affected in the tragedy.

However, the recent spate of naval arrests of HUMEDICA boats, given to tsunami-affected fishermen with large stocks of Tamil Tiger (LTTE) arms and ammunition in Kankesanthurai and Point Pedro seas along with Tamil Tiger cadres aboard calls for concrete and prompt actions by all those donor agencies.

Naval troops patrolling the seas north of Kankesanthurai as late as 13th September 2005 around 12.22 p.m. detected a suspicious boat movement in close proximity to the lighthouse at Kankesanthurai port. Troops pursued it but the boat in question began to speed away despite warnings given by naval troops to stop for checking. (See Photos in the story)

Later, troops apprehended the boat with the 19-year old Tamil Tiger cadre identified as Velayudam Ravichandran (LTTE No 1418) on board along with his haul of arms and ammunition that included one SMG gun (No. 3728231), one pistol (No. 0305589), 31 rounds of SMG ammunition, one SMG Magazine, one pistol Magazine and a few other warlike items.

Again on 15th September 2005 one more boat donated by HUMEDICA was observed in the seas off Point Pedro at about 10.35 in the night, prompting naval troops to intercept it on suspicion. The guess of the naval troops was proved correct. One more Tamil Tiger cadre, named Ganesh Kamalanadan of 22 years of age, who is with an artificial limb, was on that particular HUMEDICA boat, engaged in a suspicious secret or reconnaissance mission. The boat under reference got stuck among corals when the Navy pursued it. It was also suspected that the Tiger cadre might have dumped the load of arms and ammunition into the sea when troops were chasing his boat.

Strangely enough, the donor agency, HUMEDICA even after those detections by naval troops, appeared unconcerned about this continuing LTTE practice of using those boats for illegal clandestine operations in the seas. They repeat the practice mingling with innocent fishermen in the area. Detection of those boats by Security Forces has been duly intimated to the Head of the Sri Lanka Monitoring Mission (SLMM) in Jaffna. To-date, no ruling has been made in this regard by the SLMM, nor has there been any response to the concerns of the Security Forces in the north, as yet. 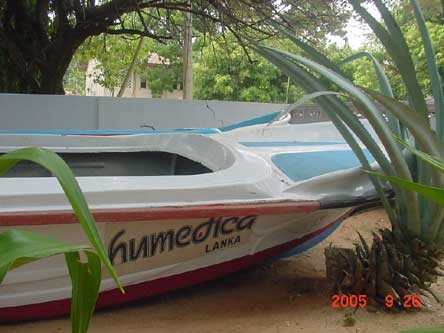