COMMANDER LISTENS TO HARDSHIPS OF AFFECTED FAMILIES OF ARMED FORCES

Commander of the Army, Lieutenant General Shantha Kottegoda, Mrs. Sonia Kottegoda, President Army Seva Vanitha Unit (ASVU) and a representative group of ASVU were in down south on Sunday (09) with the intention of exploring further possibilities of extending humanitarian assistance to affected families of the Armed Forces and displaced civilians.

The Commander and his entourage proceeded to Matara and met all tsunami-affected members of the Armed Forces and their families who had been brought down to the Matara Army camp inside the Matara Fort enabling them to meet the Commander and ASVU representatives who were instrumental in raising relief supplies since the day disaster struck.

The Commander whose native area is also from the south, during exchange of views with the victims, assured that the Army at its cost would embark on providing new houses to all affected families and address all their grievances on a priority basis after obtaining suitable state lands for construction.

Commander further reminded the gathering that the Army, taking cognizance of the gravity of the damage in full, has already undertaken the full responsibility to provide all furniture, electric appliances and other household items to members of 80 families of the Armed Forces as early as possible who have been worst affected once reconstruction of their dwellings is over.

Two ASVU organized lorry loads of dry rations, children clothes, toys, cooking utensils, clothes, bed sheets and other essentials taken to Matara with the entourage were also distributed among those displaced families of the Armed Forces and civilians by Lieutenant General Kottegoda and Mrs. Sonia Kottegoda during their visits to several affected areas after the entourage listened to their harrowing tales. The entourage mingled together freely with the victims and shared thoughts with them.

Katugahagewatte fisheries village where over 40 families were rendered homeless was the next stop for the Commander and his entourage. Those displaced victims came forward to air out their grievances to the Commander who gave a patient hearing. Later on the Commander took time off to visit the Pitadeniya monastery in the area where over 100 families are housed and began to give away dry ration parcels to affected families. Towards the second leg of this visit, they paid a visit to Siri Sumanaramaya temple and its school in Dickwella where over 50 families are housed.

Minutes after the entourage was at Kottegoda Sri Sudharshanabimbaramaya where he chatted with the monk and inquired into other urgent needs in the area. Monks, apparently encouraged by the Commander's initiative in this direction invoked blessings on him and his entourage before they left the area for Galle.

On their way back from Matara, the entourage visited a few devastated areas and spoke to a section of troops now heavily engaged in post-tsunami rehabilitation work. District Coordinator for Matara for relief work Major General D. V. S .Y. Kulatunge was also associated in the tour. 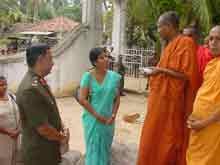 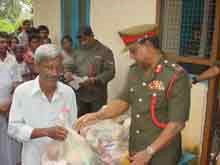 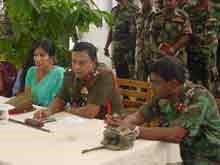 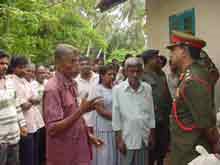 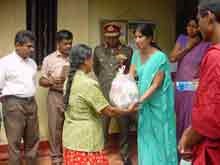 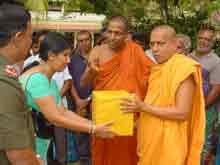 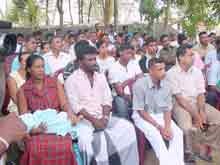 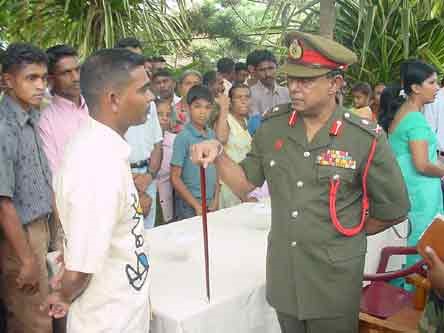