HE the President Gotabaya Rajapaksa, Commander-in-Chief of the Armed Forces has promoted the incumbent Chief of Defence Staff and Commander of the Army Lieutenant General LHSC Silva WWV RWP RSP VSV USP ndc psc, more popularly known as Lieutenant General Shavendra Silva to the rank of four-star General, effective from Monday (28 December 2020), which is considered a crystal clear endorsement and recognition of his selfless services to the Nation, although his next promotion was due having served as a three-star Lieutenant General.

General Shavendra Silva who is also the Colonel of the Regiment for the prestigious Gajaba Regiment (GR) and the elite Special Forces (SF) became a household name after he was appointed the Head of the National Operations Centre for Prevention of COVID-19 Outbreak (NOCPCO) by HE the President in recent times, well confident of General Silva's multi-skilled and energetic traits, unfailing leadership and proven abilities, a fact which has by now laid bare in the public eye in view of his untiring 24-hour commitment and dedication to the control of COVID-19 epidemic and all operational and detail-oriented quarantine mechanism which has also won plaudits.

As a 'standout' military commander, his battlefield prowess, impact on the conduct of war and significant contributions to the culmination of the ruthless warfare before May 2009, coupled with his consistent excellence in numerous encounters abundantly asserted that he is an extraordinary leader who right throughout was focused on his ground troops, their safety and sustained and uninterrupted maintenance of supply lines at the risk of his own life where General Silva's strengths served a barometer as the final phase of the war for peace was reaching its climax.

As well-accepted by many, General Shavendra Silva in essence exemplified General Norman Schwarzkopf of the US Army who had gone on record remarking that " it does not take a hero to order men into battle but it takes a hero to be one of those men who goes into battle." From the perspective of most recent history, he was one of the prominent War Heroes who stood exceptionally focused on the battlefield and his accomplishments through timely application of overwhelming superiority were well received and evident among his contemporaries. He was appointed as the 23rd Commander of the Sri Lanka Army on 18 August 2019, having elevated him to the rank of Lieutenant General while he was serving as the Chief of Staff of the Sri Lanka Army. In less than six months, Lieutenant General Shavendra Silva was appointed Chief of Defence Staff on 02 January 2020 by HE the President Gotabaya Rajapaksa, another high office for all three services that was bestowed upon him.

To his credit, his visionary prowess and committed guidance transformed the country's much-sought security and service provider, the Sri Lanka Army to be the most productive and exemplary manpower organization in the country, admitting 'nothing is impossible' for them in less than 18 months of his office as the Army Chief. Island-wide mega sapling planting drives, such as the 'Thuru Mithuru-Nawa Ratak' which also is dedicated to the beautification of urban areas, Promotion of more than five-digit number of Officers & Other Ranks whose next ranks remained long overdue, Production of remarkable prize-winning technological innovations and UN bound state-of-the art heavy vehicles of international quality, such as Unibuffels, Marked improvement in Cyber security needs, COVID-19 Roles, Commitment to national drive against drug menace, Impressive Infrastructure development of all Army establishments, Contribution to advancement of Army Sports, Own production of daily Army essentials, like dairy products, rice, vegetables and eggs, Digging of new tanks for agricultural purposes, Renovation of public utilities, such as school and public buildings and play grounds as Nation-building roles, Disaster mitigation, rescue and relief operations, Coordination with law enforcement wings to nab contraband and smuggling practices, Afforestation and reforestation efforts at all SFHQ levels, Expansion of all welfare measures and house constructions, Erection of homes for the Homeless with public support, Introduction of special caring projects for veterans and retired All Ranks, New Hospital constructions for Armed Forces, etc are among some of the most outstanding projects, General Shavendra Silva has hitherto bestowed to the organization. Of all, the just released ' Way Forward Strategy of the Army for 2020-2025' stands out as a monumentally documented strategic approach as a beacon of hope for upcoming Officers and troops as a soul searching searchlight of academic value which can be closely followed up in order to ensure national security as well as the organization's forward-march.

Prior to taking office as the Chief of Staff in the Army, he served as the Adjutant General at the Army Headquarters and several other distinguished offices. As a proud product of the Sri Lanka Military Academy, he was enlisted to the Regular Intake 19 of the Army on 5 March 1984 soon after his bright school days, during which he captained the first 11 cricket team in the St Thomas’ College and the College’s Cadet Platoon, Cadetting Band before he became the Head Prefect of the College.

General Shavendra Silva has the distinction of becoming the first Commander of the Army who has graduated in passed staff college (psc) at the Defence Services Command and Staff College (DSCSC) and in several overseas Defence Colleges. The DSCSC recently inaugurated the ‘Wall of Fame ‘by unveiling the Army Commander’s photograph as the DSCSC-produced first Commander of the Army in recognition of his academic achievements.

General Shavendra Silva is one of the highest decorated military officers with different varieties of medals and he was the first Second Lieutenant of the Sri Lanka Army to receive three different types of gallantry medals, namely the Weera Wickrama Vibushanaya (WWV), Rana Wickrama Padakkama (RWP), Rana Soora Padakkama (RSP) for the first time and Vishishta Seva Vibhushanaya (VSV) and Uththama Seva Padakkama (USP) for his distinguished service.

He has had an illustrious career from the rank of Second Lieutenant to General, covering all the salient appointments in his military career.

Thereafter, he commanded the victorious 58 Division along with the Commando Brigade which recorded the highest number of successful achievements during the “Wanni Humanitarian Operation” that liberated the country from terrorism. His Division made the longest journey during this operation and fought over 200 kilometers until its final victory and captured the single largest land mass ever captured by any formation, including the largest quantity of LTTE military hardware, weaponry and other equipment. His Division also conducted the largest ever hostage rescue mission at Puthumathalan by liberating over one hundred thousand civilians from the cruel clutches of the terrorists. In the aftermath of the war in 2009, he reached a landmark achievement in history and was fortunate to be the youngest ever to be promoted to the rank of Major General in the Sri Lanka Army. Subsequently, he commanded the 53 Division, also known as the country's Reserve Strike Force (RSF). 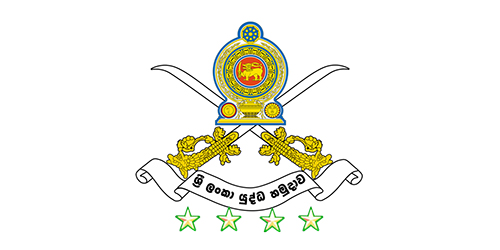