Canadian Foreign Minister Bill Graham, now in Sri Lanka was on a tour to Jaffna on Thursday (16), in a bid to receive an update on matters vis-a-vis resettlement, security and function of the ceasefire agreement in the northeast of the country.

The visiting delegate after he was received at Palaly airport, was conducted to the office of the Security Forces Commander, Jaffna Major General Sarath Fonseka where the Canadian Foreign Minister was briefed by the Commander Jaffna on ongoing resettlement programmes, the status quo of the ceasefire agreement and security matters in the peninsula.

The visiting Canadian envoy and his entourage, including Canadian High Commissioner in Sri Lanka made an inspection tour to a few public places in the peninsula, including Jaffna library and held several rounds of talks with authorities in local administration and state institutions. Minister Graham also met the Press in Jaffna before he flew back to Colombo. 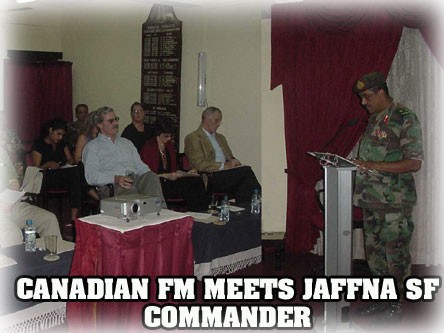