The ASVU is now geared to effect a series of welfare measures to renew awareness among members of the public of the noble tasks hitherto performed or being performed by Guardians of the Nation even at the expense of their lives or limbs.

Sri Lanka Army\'s Seva Vanitha Unit (ASVU), founded in 1984 with the express objective of promoting welfare measures of the soldiers as well as next of kin of the Fallen War Heroes, has to-date erected 161 houses and offered about 300 scholarships to sons and daughters of the Army's War Heroes. All those projects, initiated under the auspices of former ASVU Presidents and Office bearers are to continue and expand further under the chairmanship of Mrs Sonia Kottegoda, President ASVU.

Proceeds from the recently-held \"Rana Gee Miyaesiya\" at Elphinstone theatre attended by Chief of Defence Staff and Commander of the Navy Rear Admiral Daya Sandagiri are to be used for renovation work of the Ranavirusevana Rehabilitation Centre and welfare activities spearheaded by the ASVU. The occasion was also graced by Army Commander Lt. Gen S. H. S Kottegoda.

Those wishing to give their hand of friendliness are requested to send in their contributions to People's Bank, Account No. UHAMU 207-020001-1 or get in touch with Telephone No. 011-2343953 for more details about those ongoing projects. 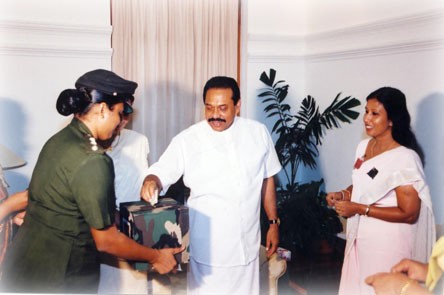