The routine Media interaction at the National Operation Centre for Prevention of COVID-19 Outbreak (NOCPCO) at Rajagiriya took place this afternoon (23), headed by Lieutenant General Shavendra Silva, Head of the (NOCPCO), Chief of Defence Staff and Commander of the Army and Attorney-at Law Ajith Rohana, Deputy Inspector General of Police.

"All 101 students brought down to Sri Lanka today (23) from India by Flight UL-1146 were taken to the Army-managed Punani Quarantine Centre (QC) for quarantine process. Likewise, more and more such groups of overseas personnel in future are expected to be brought down by the government, prioritizing those in SAARC countries. A total of 16 quarantined individuals from the Army-managed Punani Quarantine Centre (QC) after conduct of PCR tests left for their residences this morning (23) with Quarantine Certificates. As of now, 2744 persons are still in quarantine in 26 island-wide QCs, run by tri services. With this, a total of 4366 quarantined individuals have so far left those QCs, manned by tri services as of today (23),” so said Lieutenant General Shavendra Silva.

"During yesterday, a total of 20 COVID-19 positive victims were identified after PCR tests and 13 of them were from Beruwala and 5 more were from Keselwatte area. Similarly, one person from Suduwella taken to Oluvil QC was confirmed positive for COVID-19. Likewise, a sailor on leave from the Welisara Navy Camp was confirmed positive, prompting us to isolate 12 Grama Seva divisions in Polonnaruwa Lankapura Divisional Secretariat for quarantining where the victim has had contacts while on leave. Besides, the sailor's service station has been brought under quarantine and PCR tests were conducted on his fellow-sailors who worked with him. Meanwhile, a Quick Reaction Rider Team (QRRT) of 20 riders of the Army are now conducting random temperature checks on those arriving in Colombo for essential services. In the event any observation was made as regards their temperature, they are quickly referred to medical consultations for onward arrangements," Lieutenant General Shavendra Silva added.

DIG Ajith Rohana told the Media that 944 Police roadblocks and 262 District border roadblocks are in place. Director General Health Services has empowered the acting IGP to act against those violating health procedures, social distancing and guidelines during off curfew hours and prosecute them. 36,115 persons and 10,000 vehicles were arrested since the day curfew hours began, he added. 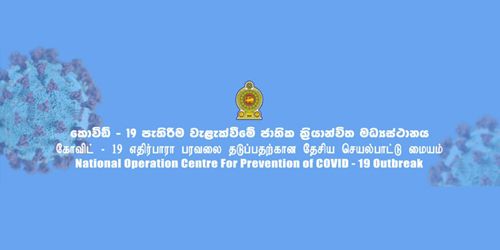