Lieutenant General Shavendra Silva told the Media that a total of 321 quarantined individuals, including 6 foreign nationals from Army-managed Periyakadu (104) and Punani (11) Quarantine Centres (QCs) and Air Force-managed Purawasakulum (206) left for their homes after medical check-ups and receipt of Quarantine Certificates. “As of today (31), a total of 2021 persons after 14-day long quarantine process have left for their houses. Out of 48 QCs, managed by tri services, a total of 16 QCs (13 improvised holiday bungalows in Diyatalawa and 3 buildings in Punani) have been already emptied and disinfection of those places is now underway. Accordingly, 1773 persons, including 9 foreigners are still in quarantine in 32 QCs. As scheduled, 100 more quarantined individuals are expected to proceed home by tomorrow (1),” Head of the NOCPCO added.

“A medical team of 11 persons, including doctors and nursing staff who treated the COVID-19 victim who died on Monday (30) at Negombo District Hospital is being kept in quarantine for 14 days by the Army and Health officials in a hotel at Waikkal at the moment. To facilitate the pensioners who are senior citizens of this country to draw their pensions, the Army has planned a transport service to take them to their banks from their homes during 1-2 April 2020 payment days,” Lieutenant General Silva announced.

He also told the Media that Navy troops during a high sea operation this morning (31) seized a vessel with a foreign flag carrying more than 500 kg of narcotic substance, ICE and 500 kg of Cocaine, valued about Rs 10 billion. 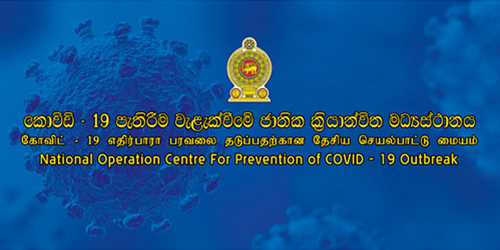