A blood donation campaign plus a Shramadana (community work) to mark the Army Day (10th October) got under way in the Jaffna peninsula on Saturday (9) under the aegis of Commander, Security Forces Headquarters Jaffna Major General Sunil Tennekoon with the support of the General Officer Commanding of the 51 Division, Major General Lawrence Fernando and the Lions Club, Wattala.

Blood donation launched at the Jaffna Sinhala Maha Vidyalaya premises attracted the presence of the Jaffna Bishop, Members of the clergy, a large gathering of military personnel and civilians resident in the area. Officials of the Lions Clubs from Wattala, Colombo and Jaffna actively supported the move that was organized by the Army.

Medical Officers of the Sri Lanka Army Medical Corps working in the peninsula assisted doctors and the medical staff at the Jaffna hospital who were associated with the occasion.

The Shramadana conducted at Telippalai Cancer Hospital the same day was attended by 515 Brigade Commander, Colonel M. K Jayawardene, where hundreds of soldiers who cleaned the premises teamed up with civil volunteers.

The Army came in for praise for those humanitarian projects by medical as well as civil authorities. 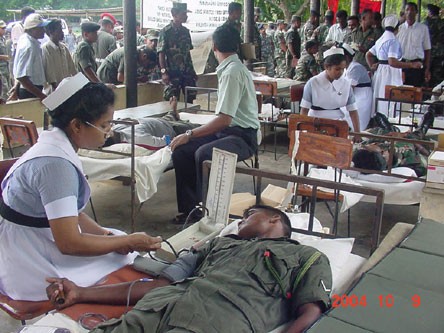