Elaborate arrangements have been now finalized to pay the Nation’s tribute to the memory of fallen patriotic War Heroes of the Army, Navy, Air Force, Police and Civil Security Department (CSD) on the 11th National War Heroes’ Day (19 May) at Battaramulla National War Heroes’ Monument (Jathika Ranaviru Smarakaya) during a dignified ceremony, headed by HE the President Gotabaya Rajapaksa, Commander-in-Chief of the Armed Forces, together with a galaxy of dignitaries, inclusive of Hon Prime Minister, Governor for Western Province, Admiral of the Fleet, President’s Secretary, Secretary Defence, Chief of Defence Staff and Commander of the Army, Navy & Air Force Commanders, Inspector General of Police, Chairman, Ranaviru Seva Authority and a host of close relatives of fallen ones.

This year’s 11th National War Heroes’ Day commemoration ceremony, organized by the Rana Viru Seva Authority (RVSA) adhering to health guidelines begins at 4.00 p.m. after the arrival of the Commander-in-Chief of the Armed Forces, HE the President Gotabaya Rajapaksa as the Chief Guest at the national event, preceded by Hon Prime Minister and other distinguished invitees in succession.

War Heroes of the Army (23,962), Navy (1160), Air Force (443), together with 2598 Policemen and 456 Civil Security Department personnel, a total of 28,619 who had made the supreme sacrifice in the fight against LTTE terrorism before May 2009 are respectfully remembered by all peace-loving ethnicity in Sri Lanka for their gallantry, invaluable and selfless dedication during this national ceremony, adorned with recital of the National anthem, Two-minute silence in honour of their memory, Reading of the citation for bravery, Religious observances, Playing of ‘Rana Bera’, Vigil mounting, President’s address, Aerial drop of flowers on the Monument, etc before HE the President, Hon Prime Minister, Governor, Secretaries, Tri Service Commanders, Inspector General of Police & others in succession, join the representative gathering of next of kin of all fallen ones to offer floral tributes to the Monument, seconds after aerial drop of flowers of the Air Force gets underway.

At dusk, the sounding of the Last Post and Reveille in conformity with military traditions would culminate the formal ceremony, a feature that takes prominence in all tri service-related commemorative ceremonies. (Ends) 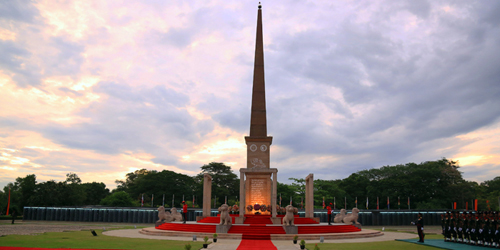