Ending the five-day long goodwill visit and reassuring continued cooperation to the Sri Lankan armed forces, General Dalbir Singh, Chief of the Army Staff of the Indian Army who was here at the invitation of his Sri Lankan counterpart, left for India Friday morning (4).

The Indian Army Chief prior to the continuation of his itinerary, paid tribute to the memory of fallen IPKF Jawans at the IPKF memorial at Battaramulla in a solemn ceremony.

Major General Jagath Dias, Chief of Staff of the Army on behalf of the Commander of the Army greeted him Friday (4) morning at the Colombo Bandaranaike International Airport soon after he arrived at the departure terminal before the delegation was ushered to the VIP lounge. Prior to his departure, the Indian Army Chief warmly thanked the Sri Lanka Army for all the arrangements and spoke high of his experiences, gained through cordial meetings and talks during his stay.

Major General Jagath Dias at the same time gifted the Indian Army Chief who felt Sri Lanka was quite close to his heart due to his IPKF service commitments in late 1980s with a photo album that depicts memorable interactions he has had during the visit and other interactions of interest in Sri Lanka.

Chief of the Army Staff of the Indian Army during his discussions with his Sri Lankan counterpart on Monday (30) shared views on current issues in the region and stressed the need to resolve them in an amicable manner with exchange of vital information, etc. General Dalbir Singh highlighted the importance of modernizing the Sri Lanka Army to suit international standards to meet with different types of emerging threats, including cyber attacks, etc.

During the cordial meeting Lieutenant General Crishanthe De Silva appreciated such assistance and requested the Indian Army to explore possibilities of new areas of training. 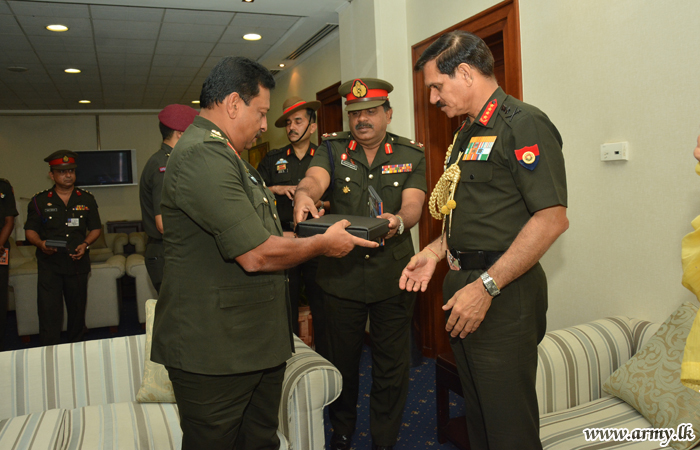