The routine pre-recorded Media briefing, held this afternoon (22) at the National Operational Center for Prevention of COVID -19, headed by Lieutenant General Shavendra Silva, Chief of Defence Staff other stakeholders was told that 3506 individuals are now being quarantined at 45 island-wide Quarantine Centers, including 31 foreigners from 14 countries.

It was also revealed that investigations, carried out jointly by the Health sector, Army, Police and Intelligence agencies confirmed a total of 15,000 Sri Lankans had arrived in Sri Lanka from foreign countries during 1 March to 15 March and needed to be in touch with their whereabouts, although many have opted to be under self-quarantine.

The total number of COVID-19 positive cases has risen to 82 as of Sunday (22) afternoon and Police curfew imposed in districts except for Colombo, Gampaha and Puttalam will be lifted at 0600 am on Monday (23) and re-imposed on the same day at 2.00 pm and would continue till 6.00 am on Tuesday (24).

Curfew in Colombo, Gampaha, Puttalam, Jaffna, Kilinochchi, Mullaittivu, Mannar and Vavuniya districts will be lifted on Tuesday (24) at 6.00 am and will be re-imposed at 2.00 pm on Tuesday (24) until for the notice.

Transport of essential goods, including food varieties and vegetables to economic centers during curfew hours is possible with permits, issued by the nearest Police station.

The public converging to purchase essential requirements after lifting of curfew should maintain the 1 m distance from each at those shops, centres, etc.

Since COVID -19 could largely infect adults, they should be confined to houses without exposing them to outside environment.

Presently, 74 positive cases in the IDH at Mulleriyawa and 7 are in Welikanda hospital.

Chloroquine & Hydroxychloroquine are not prescribed as therapeutic drugs and pharmacies are advised against the sale of these drugs without any prescription from a doctor.

Pilgrims who came from India in the past 24 hours (21-22 March) are housed at Quarantine centers. 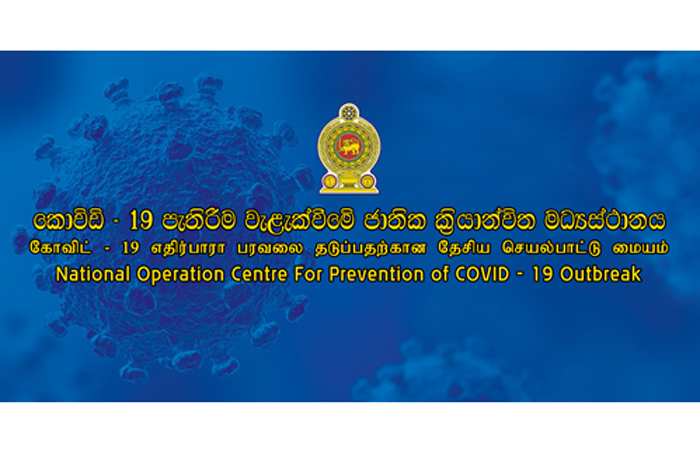