The Sri Lanka Army has once again proved that its soldiers are adept not only in warfare but also in mechanical and technical expertise that could be tapped for matters of phenomenally important religious and cultural matters. A case in point is the restoration of the vehicle used by Anagarika Dharmapala, the 19th century Buddhist revivalist to its pristine glory by soldiers of the Sri Lanka Electrical and Mechanical Engineer Regiment (SLEME), following a request made by Members of Maha Sangha and former Deputy Chief of Staff Major General H. Neil W Dias RWP RSP USP ndc IG to the Sri Lanka Army.

This vehicle of Anagarika Dharmapala, â€œSobana Maligawaâ€ which was used to travel throughout the country on his renowned mission to rekindle interest in Buddhism and its heritage was found in a dilapidated state, though the vehicle possessed facilities such as sleeping quarters, a writing table and a chamber from which he used to address the public.

Anagarika Dharmapala who rose against imperial attempts to undermine Buddhism and its values under colonial Ceylon spearheaded a campaign of Buddhist re-awakening across the country. Masses in their thousands followed his campaign of Buddhist revival resulting in the establishment of a few Buddhist schools for the first time in then Ceylon. His vehicle of historic value while remained idling in the possession of a businessman at Bandaragama was re-taken by Ven. Banagala Upatissa Thera, Chairman, Maha Bodhi Society and Ven.Thiniyawala Palitha Thera, Incumbent, Nalandaramaya, Nugegoda assuring restoration of the same, considering its national importance.

Soldiers at Katubedda-based SLEME under the patronage of Colonel Tissa Jayasuriya, Commanding Officer at this work site volunteered to work day and night and it took almost ten months for all parties to bring the vehicle to its former glory. A number of philanthropists and donors had shared the cost of the whole project. The restored vehicle, now at display at Ananda College, will be officially handed over to the Mahabodhi Society of Sri Lanka on Tuesday (17) to coincide with Anagarika Dharmapala's 138th Birth anniversary celebration. 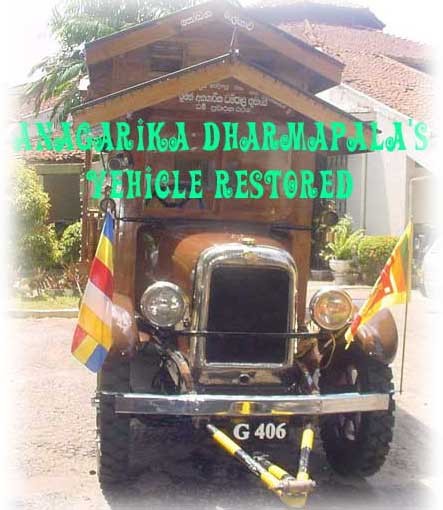 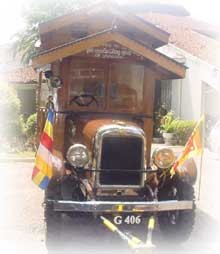 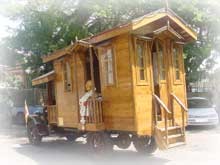