The recently-promoted biggest-ever group of Army Officers in recent history received a stimulating word of great wisdom from none other than the Head of the organization, Lieutenant General Shavendra Silva, acting Chief of Defence Staff and Commander of the Army when he addressed all those 244 Officers after inviting them to the Army Headquarters at Sri Jayawardenepura this evening (12).

In his half-hour long address to those promoted ones, the Army Chief extending his best wishes on their elevation to the next rank reminded them that HE the President Gotabaya Rajapaksa, Commander-in-Chief of the Armed Forces on his recommendations through the Ministry of Defence readily gave the green light for those overdue promotions, offering a fresh fillip to their careers.

“Having understood stagnation over the promotion of Officers at length, I personally met His Excellency the President and Secretary Defence to acquaint them on this stagnation of officers which evidently hinder their career progression. I am pleased to announce that with the guidance and directions of the Commander- in-Chief and His Excellency the President, I was able to create 207 additional Lieutenant Colonel and above vacancies in the first time of our Army’s history as a precursor to address existing stagnation of promoting officers to the next higher rank,” Lieutenant General Silva remarked.

“Today, we all are fortunate to have a Commander-in-Chief who has started his career as a Second Lieutenant, like all of us. Also, we have Secretary Defence who also started his career as a Second Lieutenant and he himself commanded most of you in the field during the height of the Humanitarian Operation. Your Commander-in-Chief and Secretary Defence always feel your pulse more than anybody. It did not take hours for me to convince HE the President, who was generous enough to get the Cabinet approval for the numerical cadre within a very short period of time.”

“Let me begin by congratulating all Senior Officers and Officers on their recent promotions to the respective ranks. Your promotion shows that, the Sri Lanka Army believes in your abilities to perform at the next higher grade. It is a reward for hard work, dedication, discipline and commitment. Your promotion is certainly an achievement, you know it very well that all officers in one Intake will not get the opportunity to be promoted at once. Specially, the recently promoted Lieutenant Colonels, Colonels, and Major Generals will bear the testimony for this fact.”

“Upon assuming my duties as the 23rd Commander of the Army, I clearly explained you that my command is shaped on four major concerns; protection of my country, protection of its people, development of the Army and well-being of All Ranks in the Army. Today, I am not going to talk in detail about first three concerns, but I will take the last point; well-being of all ranks in the Army.”

“Lack of vacancies for most of the senior ranks was a common issue for many years in the recent past. The word stagnation was a common speaking word in the Army for last many years. Not only for the officers, it was somewhat similar among the Other Ranks for a long period. I must also state that, I succeeded in promoting 7262 Other Ranks on the 70th Army Day marking a historical fiat in number of promotions and I am humbly proud over such an endeavor as the incumbent Commander of the Army.”

“On 4 February 2020, I was able to promote you all, numbering 244 Officers including 11 Lieutenants, 80 Captains, 42 Majors, 49 Lieutenant Colonels, 45 Colonels and 17 Major Generals due to my never-ending determination on ensuring career progression of my under commands. Importantly, the vacancies created through supernumerary scheme was effective for limited number of officers within you, and I am certain that, this supernumerary scheme would address the long-waited stagnation in the officer cadre, bringing justice to their meritorious service to the Nation.”

“With this recent elevation to the next level, you must be very clear that, your new rank not only brought an extra glamour to your uniform, but also an array of additional responsibilities for you to perform with fresh vigour and dedication. You must march towards to be professional military officers. There are many opportunities awaiting you to progress through your career, unlike in the past, where professional grooming was at stake due to escalation of war in the country. Hence, always be professional military Officers and serve Nation being dressed up with knowledge and positive attitudes. It is certain that you would humbly be proud of the significant achievements you have gained over the years as an Officer and a gentleman of the Sri Lanka Army. The promotion bestowed upon you reasserts your professional competence and bold leadership qualities. Thus, I wish to highlight some points that you should focus your attention.” the Acting Chief of Defence Staff and Commander of the Army told the gathering.

Giving a piece of advice to all promoted Officers, the Commander highlighted the importance of mission command, decentralization of responsibilities, ‘thinking out of the box’, good decision-making, economical use of resources, human resource management, military diplomacy in engaging with civil community while protecting the image of the Army.

“Look after your men. Be tough when you have to be. But, if you have taught what their job, the responsibilities Army supposed to do and what you have ask them to do. Those who do well should be commended. For us, as officers there is nothing impossible in life. Your attitude, the way you approach with the right mindset are choices. Anyway, I would say nothing impossible. Throughout my life I believe this. The Army has to perform in the highest standard possible to meet the best interests of the Nation. Our fullest contribution towards expediting socio-economic development of the country is greatly expected by the people. Thus, I encourage you to maintain higher degree of professionalism and devotion to the service.”

“I urge you to serve your country with highest level of honour, dignity and professional ethic to uphold the great reputation which the Sri Lankan Army has maintained since its inception. I advise you to bring your professionalism, and excel your leadership through 5Cs (Character, Courage, Conviction, Commitment and Care). Your future opportunities are not simply based on seniority, leaving opportunity for meritocracy is a fair play. Performance-based system truly rewards the most qualified officers who are seeking advancements. But, your seniority is also respected.”

“Ladies and Gentlemen, I would like to give you a valuable piece of advice, which would help you to shape up your future military career successfully. I believe this speaks to your future. “Deliver more than expected and express your character, then you never be afraid to fail as it is the only path to success” also I must remind you, not to get involved in unprofessional acts which has no value. In conclusion, I believe that, you all would rightly understand the fresh responsibilities lay on your shoulders with newly adorned promotion. Congratulations,” Lieutenant General Silva concluded. 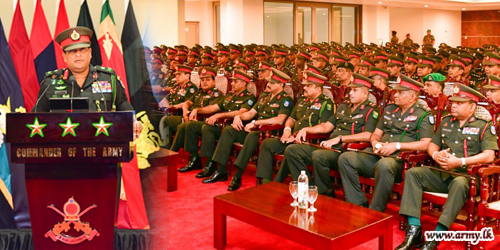 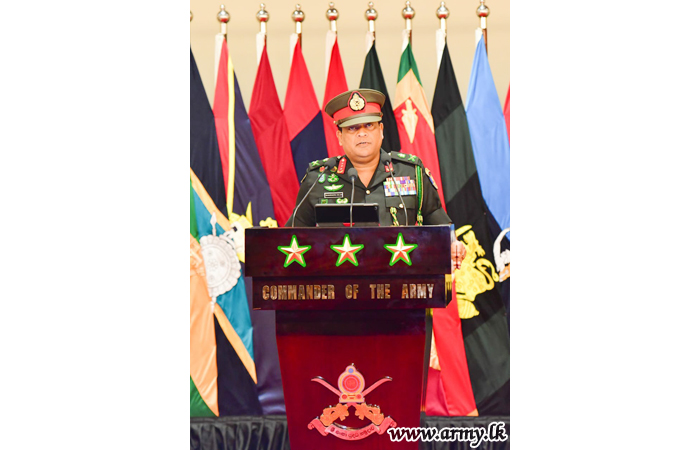 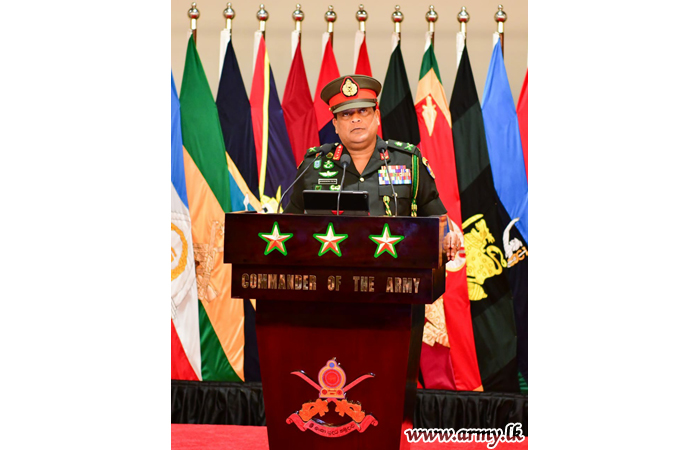 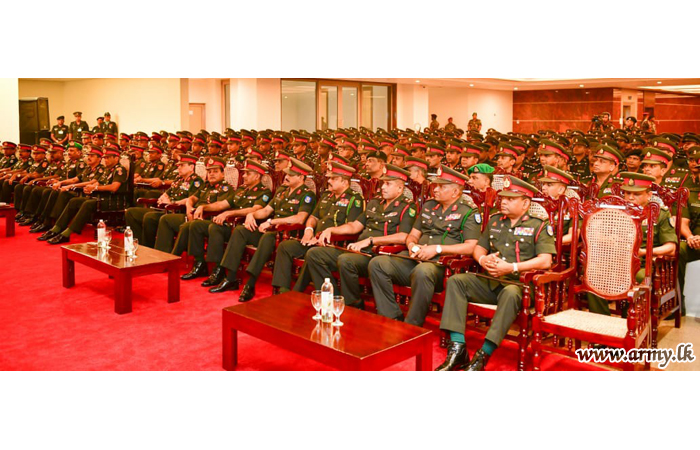 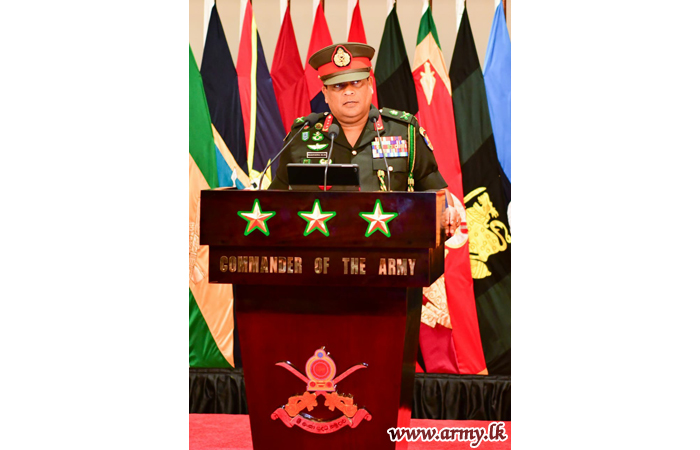 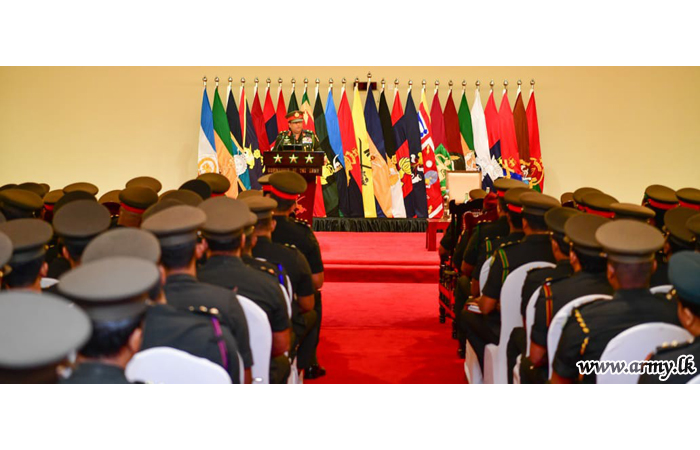 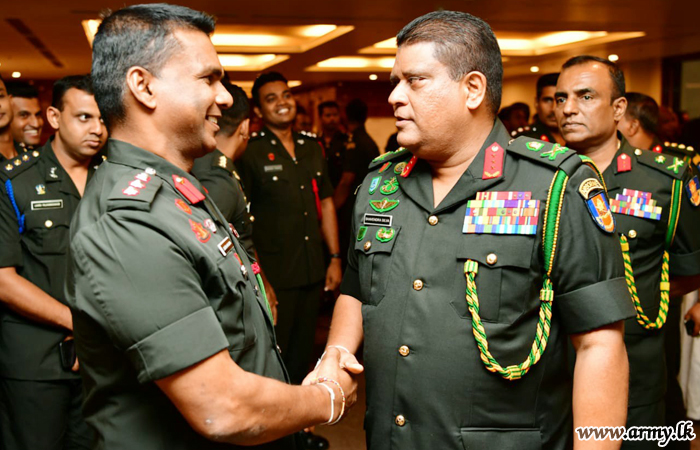 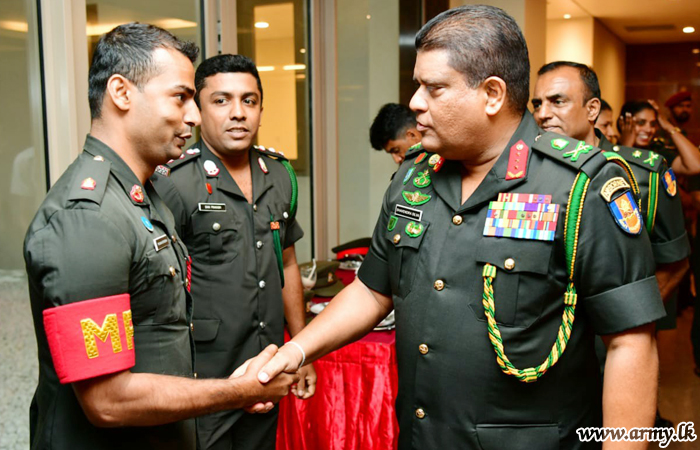