“Even powerful countries would not allow any action against their War Heroes and I will not allow anyone to exert undue pressures on War Heroes, harass them and target our War Heroes in a poor country like ours. If any international organization or anyone targeting our War Heroes on baseless allegations is trying to harass us, I emphatically state that I will not hesitate to withdraw our membership from such organizations,” so underlined HE the President Gotabaya Rajapaksa, Commander-in-Chief of the Armed Forces addressing the National War Heroes’ Day commemoration this evening (19) at Battaramulla War Heroes’ Monument.

“I would never leave any space for elements who are trying to discredit or deprive the recognition those War Heroes deserve, nor would I allow anyone to work against their legitimate rights since it is our national duty to protect them after they restored all our democratic rights and freedom of moving into any area of the country, having crushed the country’s brutal terrorism. I assure you that I would attach the highest and the prioritized regard for their sacrifices and rights as a national duty.”

“I had been in service for 20 years and nearly 10 years as Secretary Defence. Since the war is not a bed of roses, I very well know the sufferings in it. War veterans, like Generals Kobbekaduwa, Vijaya Wimalaratne, et al made supreme sacrifices for protection of this country and no one should try to deprive or degrade such commitments. Extremist forces always want to divide and split countries based on ethnicity, religion, etc and Sri Lanka was fortunate to have maintained such unitary status, enabling all of us to live in peace as members of one family.”

“Our War Heroes fought against one of the most ferocious terrorist outfits in the world and that brutal war fought by terrorists regardless of the country’s law and order, deprived us of valuable resources and many innocent lives on roads, in buses or trains. Terror reigned in our society and completely jeopardized our development for more than 30 years. As a country, well nurtured by Buddhist virtues, passions and values, we were able to restore a society, rich with democratic rights where law is supreme. Under the leadership of the former President HE Mahinda Rajapaksa, on a day like today, eleven years ago we were able to achieve that peace which we did not enjoy for more than 30 years,” the President pointed out. 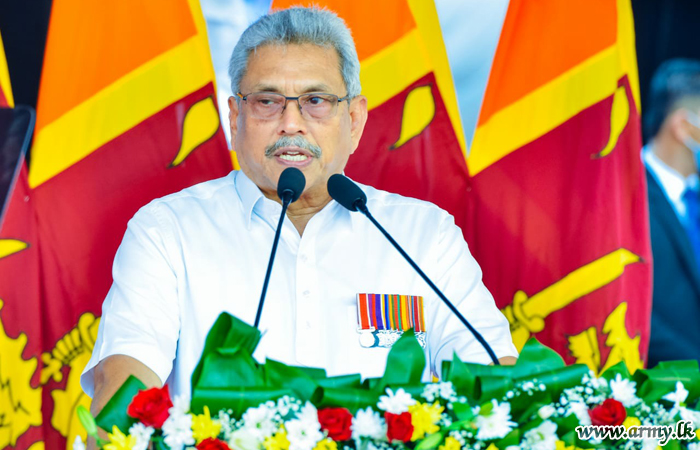