Members of the Army serving the 662 Brigade of the Security Force Headquarters - Kilinochchi (SFHQ-KLN) promptly responded to an SOS appeal of the public and facilitated the movement across a causeway along remote Karadipokku - Uruthirapuram road which is still under construction.

Due to onset of heavy rains, Uruthirapuram area became inundated with spilling and flowing water in the Sivan Solai canal bridge, and its tributes aggravated the flood situation in the area, compelling villagers to stop even foot movement across the said causeway since the bridge still under construction, remains in a higher elevation.

One Dr Karthi of the Regional Director of Health Services, Kilinochchi who saw for himself the risks involved to human lives brought the situation to the notice of the Kilinochchi District Secretary who in turn alerted the 66 Division troops and the 662 Brigade Commander who is in charge of the area, seeking immediate assistance and safety for those trapped victims.

Colonel G.D Suriyabandara, 662 Brigade Commander immediately instructed nearby 20 Sri Lanka Light Infantry (SLLI) soldiers to take necessary safety steps by manning the causeway at both ends under construction until civilian movements are over during Tuesday (29) until this afternoon (2) as water levels were still fast rising on both sides of the causeway.

Similarly, another emergency contingency plan had to be executed by 20 SLLI and 18 (V) Gajaba Regiment (GR) troops of the 66 Division on the directions of its General Officer Commanding, Brigadier Duminda Keppetiwalana in view of prevailing heavy rains in the general area of Uruthirapuram, Periyakulam and nearby areas in Kilinochchi on Wednesday (30).

The bund of a canal sprouted out from the main Uruthirapuram - Murippu tank to Shivakulam area was found about to burst due to spilling water levels as civilians started panicking. Troops of 20 SLLI and 18 (V) GR quickly jumped into action and prevented the bund from splitting by placing more than 500 sandbags and restoring weak areas of the bund as early as possible despite torrential rains. It took more than one and half day for the troops to complete the project and dispel disastrous circumstances.

Meanwhile, 6 Sri Lanka Sinha Regiment (SLSR) troops of the 572 Brigade in Periyakulam, Kandavalai rescued a 70-year old grandmother, named Ms M Rasamma and her 8-year old grand daughter, S Karthika, desperately trapped inside the debris of their own house which collapsed due to heavy rains and the fall of a coconut tree on to their roof. Troops grappled, rescued and moved them out safely to a temporarily erected shelter nearby forthwith and afterwards repaired the damaged house within hours, allowing them to reoccupy the same by Thursday (1) evening. 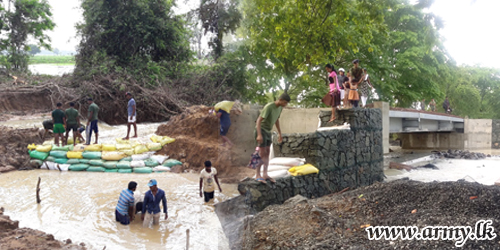 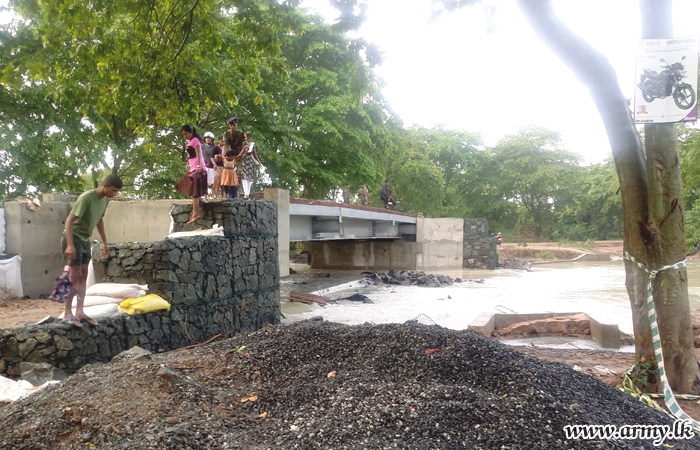 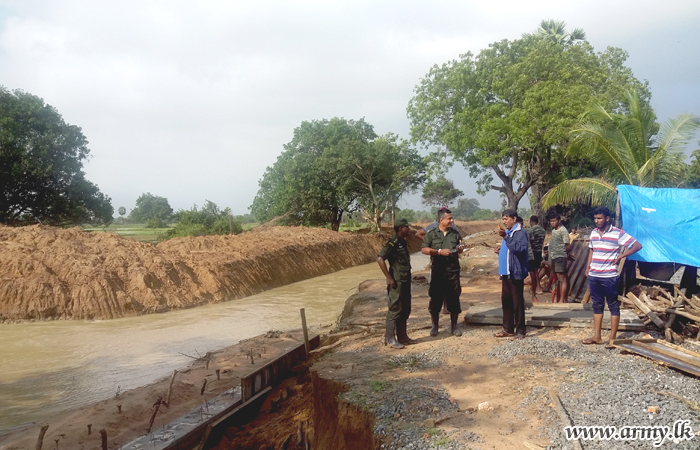 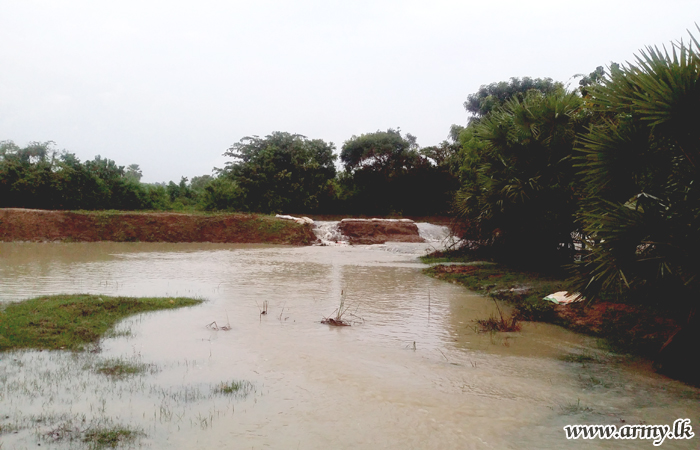 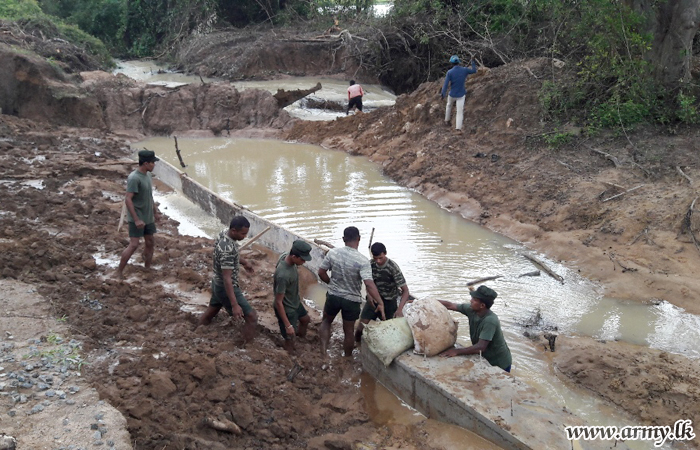 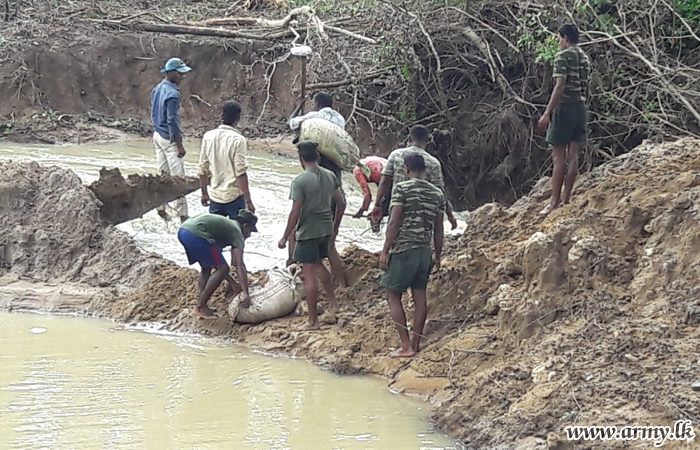 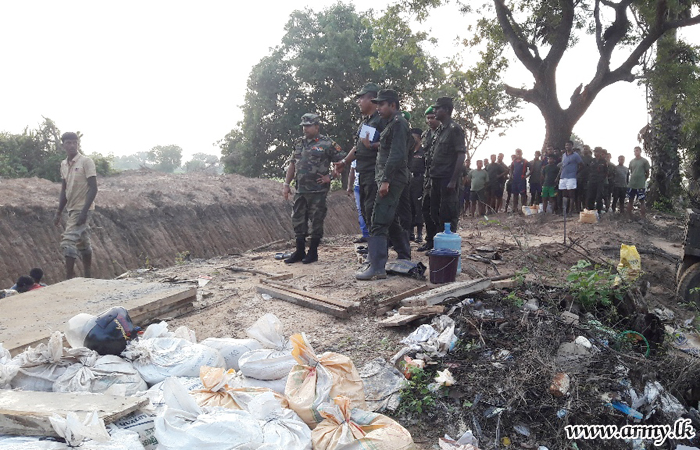 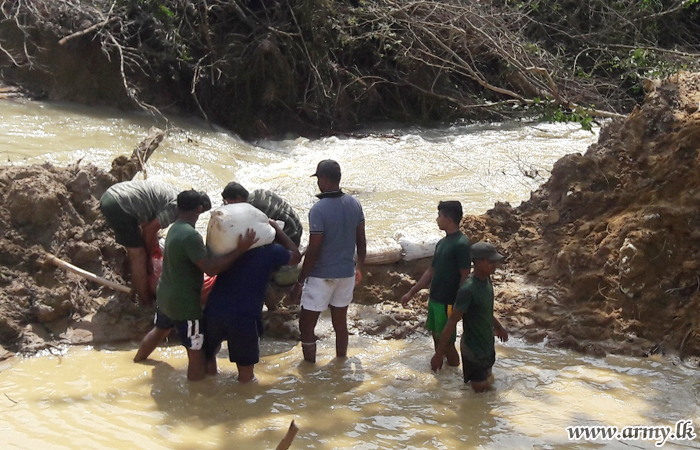