The re-commencement of this Competition, sponsored by the newly formed Non- Governmental Organization, Marga Mithuro (friends on the road) is scheduled for Saturday (21) and it will be contested by 120 drivers from the armed forces and the Police, majority of who are from the Army.

High standard of driving is always a discipline that should be upheld. The absence of war has enabled the re-commencement of this competition following an initiative taken by the Commander of the Army, so said Mr Austin Fernando, Defence Secretary at the media conference.

Brigadier Wijesuriya, instrumental in organizing the event said that this Competition is not a â€œraceâ€ but an attempt to discipline drivers as well as road-users. â€œ We want to set an example first and foremostâ€ he said.

Marga Mithuro is to actively sustain this public awareness programme by mobilizing the public support towards reducing the number of accidents on roads.

Starting off from Kotte's Parliament grounds, the contestants will proceed on two different routes to be checked and qualified by a special panel who will carefully monitor contestants for strict adherence to rules and regulations. Light Vehicle and Heavy Vehicle categories are entertained in this competition.

Two songs on the themes of road discipline, sung by two popular artistes will also be featured on Saturday. Trophies and certificates are to be awarded to the winners at the end of the day before the musical entertainment commences at night. 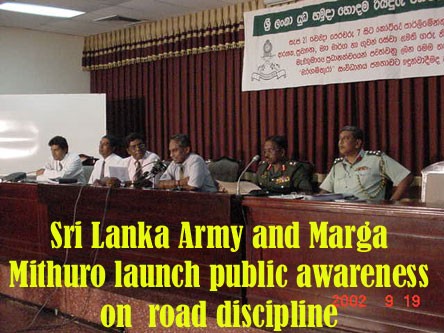 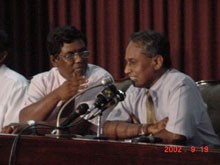 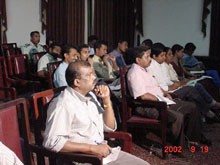