The Principal, teachers, students and old pupils of the Dharmasoka Vidyalaya, Ambalangoda, organized a ceremony to felicitate Commander of the Sri Lanka Army Lieutenant General Sarath Fonseka, an Old Pupil of Dharmasoka, at the College premises on Thursday (12) morning.

On arrival, Mr. K.M.B.G. Jayasooriya, Principal of the school, received the Commander at the main entrance and the girl Head Prefect placed a bouquet of flowers in the hands of Mrs. Anoma Fonseka to welcome her.

He also excelled as a skilful swimmer and showed colours in other sports whilst earning love and attention of teachers as a clever and disciplined student.

Mr. K.M.B.G. Jayasooriya, the Principal, and the male Head Prefect of the School expressed their pleasure on the elevation of a past pupil of the college to the highest chair of the Sri Lanka Army.

Lt Gen Sarath Fonseka, in his address, requested the students to work for the betterment of the country with devotion and virtues. He further urged them not to act as some others in the present day society who squander and misappropriate national property forgetting their duty toward the nation. Lt. Gen. Sarath Fonseka did not forget to express a word of gratitude to his school, which sheltered him from Grade 1, and his teachers who showed him the right path to the success of his life.

General (Retired) M.D. Fernando, the Defence Advisor to HE the President, and a large number of retired and serving Senior Service and Police Officers who were academically fed by the famous Dharmasoka college in Southern Sri Lanka were among the distinguished gathering present on this historical day to share the College's pride of felicitating one of her old sons who won the life through dedication and hard work.

The Commander exchanged mementoes with the Principal before appearing the photographs with the Staff, Students, Old Pupils, Service Personnel and many others. 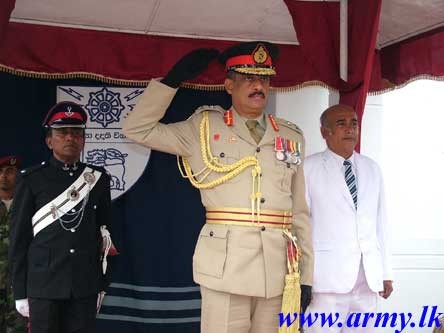 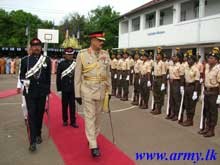 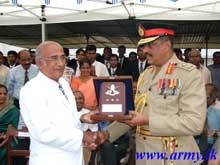 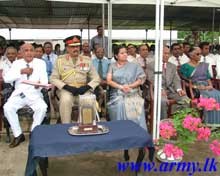