Contemporary military leader par excellence, Lieutenant General Denzil Kobbekaduwa RWP RSP VSV USP rcds psc, the archetype of Sri Lankan soldier and one of the most loved, ardent and illustrious advocates of peace exactly thirteen years ago on a day like today (8th August), made the supreme sacrifice with nine other War Heroes in an LTTE orchestrated explosion at Araly Point in Kayts, Jaffna. His death anniversary with other fallen heroes is commemorated today in Anuradhapura, Jaffna, Vavuniya and many other areas in the island.

As radios and electronic media beamed the news of their supreme sacrifice, the shocked Sri Lankan nation turned almost numb and began to glue themselves to updated news dispatches on that fateful day with a deep and moving sense of grief and loss. His untimely departure and irreparable loss brought tears to the eyes of all segments of the society.

Patriotic and peace-loving island-nation after news broke stood aghast at the loss at a time when her troops were marching forward successfully against secessionist forces under the able guidance of the fallen hero, Lt. Gen Kobbekaduwa, who was also widely respected and admired among many members of the Tamil community.

Lt. Gen Kobbekaduwa created a niche for himself among all Sri Lankans in both peacemaking and warfare mainly because of his far-sighted and humane approach towards Sri Lanka's national question, and also for those who have fallen prey to vicious circles of divisive forces and terrorism. In essence, he was the unmatchable model for thousands of soldiers in the Army, not only because of his military prowess, but also due to his unique man-management and public relations, very much spoken and admired in many a quarter even today.

This year's highlights of the commemorative ceremonies include the memorial ceremony at the permanent monument erected by the Armed Forces at Araly Point where their tragic demise occurred. A series of other meritorious activities in his memory, led by Mrs Laly Kobbekaduwa, members of Lt. Gen Kobbekaduwa's family, Denzil Kobbekaduwa Foundation, Armed Forces and various organizations have been organized at island-wide temples, common places, and military units.

All members of the Armed Forces and the Police on Monday (8), the fateful day Lt Gen Kobbekaduwa and others died for the sake of the nation, are to salute this newly-re-erected monument in memory of those fallen heroes at Araly Point at a simple ceremony to pay a glittering tribute to those War Heroes. Members of the Maha Sangha and different other religious dignitaries are to invoke merits on the fallen leader and others in a moving commemorative spirit on the occasion.

Recalling dedicated and humanitarian gestures of the late War Hero and his common-touch with the masses when he was alive, Mrs Kobbekaduwa on the eve of the thirteenth death anniversary are to distribute hundreds of dry-ration parcels and agricultural equipment among the needy in Navodagama and Vannilehebeweva areas in Tanthirimale.

Mrs Kobbekaduwa will place a floral wreath at the foot of his husband's statue at Anuradhapura town and pay her respects to late Lt. Gen Kobbekaduwa before she offers alms to monks at Lankaramaya, Anuradhapura. Family members later on Monday (8) night are to attend a Bodhi Puja at Jayasri Maha Bodhi, Anuradhapura in his memory.

At Vavuniya, a separate commemorative ceremony organized by 211 Brigade will get under way Monday (8) morning after garlanding the Kobbekaduwa statue in the centre of Vavuniya town. A representative gathering of religious dignitaries, Armed Forces and the Police were to take part in this event where Last Post is to be sounded in his memory. Special meritorious activities, including an alms-giving to Etambagaskada temple in memory of him and other War Heroes are also to be held at Vavuniya.

Several community organizations in Colombo and elsewhere have planned a series of other meritorious acts in his memory and other war veterans. 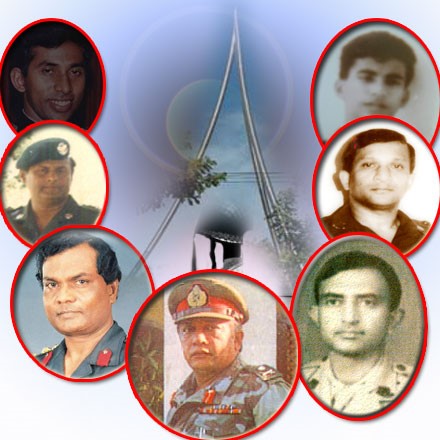